t's a fascinating concept: in the early centuries of the Church was the apocryphal idea that after His death, Mary experienced private apparitions of Jesus.

"Apocryphal" means of doubtful authority -- that it is not in Scripture --  but many are those who have believed it.

As one priest suggested last week, it makes for an excellent Rosary meditation (in this the month of the Rosary): contemplating what it would have been like for her to see her Son in apparition, as many would later see her.

And it makes a certain amount of sense: the Lord appeared for forty days to His disciples, to Mary Magdalene, to untold others, and why would He not appear in consolation to His mother?

She was there in the Upper Room at Pentecost and while there is no proof, there is no reason to believe her experiences ended there.

Did the Blessed Mother really see Him?

We can imagine what that would have been like, the Lord suddenly appearing in splendor to His mother, who was still in mourning. She would mourn no longer! If she is often described as appearing with a fantastic light that is beyond description, we can only imagine the Light around Him, if He appeared, likewise, as a corporeal apparition.

Many are those with near-death or other mystical experiences who report that His Light is beyond the power of the sun -- far beyond it in brightness -- and yet easy to stare at. One can envision her humble abode, this home where she repaired clothes, where she made bread, a rough-hewn dirt-floor home filled with that luminosity, perhaps along a hillside.

One image of her is holding the Crown of Thorns and watching as the Blood evaporates. That would symbolize her joy at knowing her Son lives. Or would He have shown His Hands with the wounds melting away? We can hear Jesus say, "Hail Mother, full of grace, I am with you" (instead of "the Lord is with you," as the angel said). 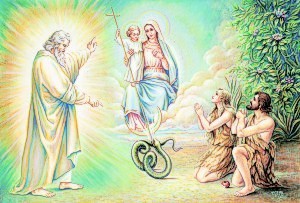 This is of course fantasy. But while we're at it, can we imagine how it would have been if, in a prefigurement, as one artist saw it [left], there had been a premonition of her long before that with her Son in the Garden (where it was foreseen that her seed would step on the head of the serpent)?

More than anything, the point is that there were doubtless fascinating events we will learn about only in Heaven. For now, we can ask the Holy Spirit.

What we do know and what our Protestant brethren need to embrace is that Mary herself has appeared since the very first century, when she was seen by the Apostle St. James. That is figured to have been around A.D. 40 at Saragossa along the Ebro River (in northern Spain).

Seven years later, the Blessed Mother appeared at a spot known in France as Le Puy -- which became the first huge place of Marian pilgrimage. That was to a woman named Villa who had her vision while praying for a cure. Later, as a sign, snow appeared on a local hillside, even though it was July 11.

Few are those who realize that Mary's appearances have occurred throughout the entire history of Christianity -- including its earliest phases.

Major manifestations -- and coincidences -- have been recorded every century. 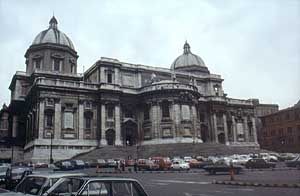 Last Saturday was the feast for Our Lady of the Rosary, which marked the victory of Christians over the Muslim Ottomans -- Turks -- who sought to overrun Europe but were halted during the famous Battle of Lepanto.

A miraculous victory was won as the Pope prayed the Rosary at Mary Maggiore Basilica (left) -- leading to his bequeathing her the title, "Our Lady of Victory."

Centuries later, at Fatima (which was named for a princess who in her turn was named for the daughter of Mohammed), the Blessed Mother initially identified herself, as at Lepanto, as "the Lady of Victory."

Meditate on that a second. And if that's not "coincidental" enough, there is the fact that another one of her early appearances would be in Rome in A.D. 347.

The sign there too was snow, and on a hill, this time August 5, marking the spot where she wanted a church built -- the church that would become Mary Maggiore!