Mary, Take Over! an anointed, inspirational account of how the Blessed Mother -- as  Undoer of Knots -- should be handed our daily trials large and small as we watch her work wonders with them -- turning obstacles into miracles! This booklet is by the same group that brings us 'Mary Undoer of Knots' and though small brims with powerful examples of how the Virgin Mary can enter any situation -- can help you against any 'Goliath' -- and make things  better than ever. click here

A definitive biography by Carmelite nuns at a convent in Coimbra, Portugal, reveals that famed Fatima seer and fellow Carmelite Lucia dos Santos (also known as Lucia of Jesus and the Immaculate Heart) had added details to the third secret, indicating a wider scenario of potential future world calamity than previously recognized.

The biography, just released in English by the World Apostolate of Fatima and entitled A Pathway Under the Gaze of Mary, replete with many new photographs, details how on January 3, 1944, thirty-seven years after the iconic 1917 apparitions -- while waiting for the Lord to answer an urgent prayer precisely to do with the writing of the secret for a bishop -- Our Lady of Fatima made another appearance to the nun/visionary.

This occurred as Sister Lucia was undergoing a spiritual trial, finding herself conflicted over a request of the Bishop of Leiria to write down what she had heard and seen pertaining to the prophecy. The nun was mysteriously unable to put pen to paper.

Kneeling at a Communion rail to fervently ask Jesus His Will, "feeling puzzled and half-absorbed under the weight of a dark cloud that seemed to hang over me," the cloistered nun -- who became a religious soon after the apparitions (the two other seers died very young) -- looked up, she said, and saw "the beloved Mother from Heaven." Again, this is 1944.

"Do not be afraid, God wanted to prove your obedience, faith, and humility," she quoted the Virgin as telling her. "Be at peace and write what they order you, but do not give your opinion of its meaning. After writing it, place it in any envelope, close and seal it and write on the outside that this can only be opened in 1960 by the Cardinal Patriarch of Lisbon or by the Bishop of Leiria."

The third secret -- mysterious for decades -- was publicly released in June of 2000 by Pope John Paul II and described the vision of an angel with a flaming sword. Lucia wrote down that "flames came off the flaming sword wielded by the Angel, and the flame was extinguished when it came in contact with the light radiated from the right hand of Our Lady." It was as if the angel "would set the world on fire." The children were also shown an image of clerical martyrdom, including a "bishop in white" assailed by gunmen.

It seemed to pertain, in great part, to the great Soviet persecutions that immediately followed the apparitions, as well as the shooting of John Paul II on May 13, 1981 -- anniversary of Our Lady's first Fatima apparition.

Mentioning the year 1960 as it did -- a time of great tension between the U.S. and Russia, a country named in the other two secrets -- speculation has been that the "flaming sword" had to do with a possible nuclear war, as still seems logical.

But the new information suggests the looming chastisement -- one that, for all we know, still looms -- may have gone beyond war, involving also great natural cataclysms. It is not clear if Our Lady extinguishing the flame from the sword finished the issue or if a geophysical event might be separate from the threat of war and still in the future.

For in 1944, when the Virgin reappeared to Lucia, the seer was granted what she described as not just the go ahead to write the secret but further enlightenment.

"I felt my spirit flooded by a mystery of light that is God and in Him saw," the nuns report her as saying, "and heard: '--The tip of the spear as a flame unlatches and touches the axis of the earth. It shudders. Mountains, cities, towns, and villages with their inhabitants are buried. The sea, the rivers, and the clouds emerge from their limits, overflowing and bringing with them in a whirlwind houses and people in numbers that are not possible to count. It is the purification of the world as it plunges into sin. Hatred and ambition cause the destructive war!"

This dramatic addition to what was revealed in 2000 -- though not part of the actual secret itself (which Sister Lucia told her colleagues was indeed released in full by the Vatican in 2000) -- seems to imply an event or series of events beyond what a nuclear bomb would cause, and may link to claims through the years that the secret indicates events such as quakes or tsunamis. While a nuclear bomb detonated over the seas would have major effects, a touching of the earth's axis seems more geophysically profound.

It may also shed light on the origin of a report in a German newspaper, Neues Europa, which in 1963 claimed the secret warned that "fire and smoke will fall from the sky and the waters of the oceans will be turned to steam -- hurling their foam towards the sky, and all that is standing will be overthrown. Millions and more millions of men will lose their lives from one hour to the next, and those who remain living at that moment will envy those who are dead. There will be tribulation wherever the eye can see and misery over the earth and desolation in all countries." Half of mankind, said the Neues Europa secret, would be killed in a matter of hours. And there would be consternation in the Church. "Cardinals will be against cardinals, and bishops against bishops," said this version. "Satan will put himself in their midst."

A startlingly similar message was given in a partly Church sanctioned revelation to a nun in Akita, Japan. Crumbling mountains and a great uproar in the oceans were likewise indicated by a message from LaSalette, France, in the nineteenth century.

While both Sister Lucia and the Vatican had long dismissed the "Neues Europa" secret as the vaunted part of the 1917 messages -- as indeed it was not part of the actual, original secret, as it turns out -- it now appears the publication may have been privy, albeit with a number of inaccuracies, to the 1944 "enlightenment," which bears striking similarities to the scenario thought to have been concocted by the obscure German publication.

There thus is more to the third secret, details that came decades after 1917 to the nun, while cloistered in a convent in Spain. The revelation in the new book also seems to explain and confirm a hitherto doubted report in a periodical called Stimme des Glaubens claiming that during a visit to Fulda, Germany, in November of 1980, Pope John Paul II was asked by a group of pilgrims why the third secret had not yet been revealed. The Holy Father supposedly had replied: "Given the gravity of its contents, so as not to encourage the worldwide power of Communism to take certain steps, my predecessors in the chair of Peter preferred, out of diplomacy, to delay its publication. On the other hand, all Christians must be content with this: if it is a question of a message where it is said that the oceans will entirely flood certain parts of the earth, that from moment to moment millions will die, hearing this, people should not long for the rest of the secret."

The flame from the "sword" touching the axis of the earth could be taken as indicating a huge geologic disturbance -- one that indeed would cause the seas to wash back and forth, as more recent visionaries have asserted they have seen.

Added Sister Lucia about her 1944 "enlightenment": "I felt the rapid beating of my heart and in my mind the echo of a gentle voice saying: "--In time, one faith, one baptism, one Church, Holy, Catholic and Apostolic. In eternity, Heaven! This word Heaven filled my soul with peace and happiness, so that almost without realizing it, I was repeating it for a long time:

"The greatest supernatural strength passed and I wrote and did it without difficulty on January 3, 1944, on my knees, resting on the bed that served me as a table."

[resources: Under the Gaze of Mary and The Final Hour]

[Next: what was meant about the phrase in the secrets about Portugal, and was the consecration of Russia, as requested by Our Lady of Fatima, accomplished?]

[More on Akita and the Neues Europa message; text of the third secret]

[Photos are from the book, published by the World Apostolate of Fatima] 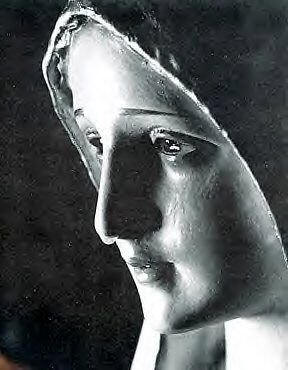