From The Mail: Exudations From Statue At Medjugorje Increases During Hour Of Mercy

met my husband in April of 2005 during a pilgrimage to Fatima, Lourdes, and Garabandal. Both of us booked relatively close to the date of departure unbeknownst to each other. There was a special calling that we both felt we needed to respond to, not realizing that a unique bond was being created by all of Heaven for us to be joined.

From our very first trip many unexplained happenings occurred, sometimes on a regular basis.

We were married on December 10, 2005. Because my husband's family came in from Europe for our wedding, we postponed our honeymoon till February of 2006. We went to Medjugorje in Bosnia-Hercegovina February 11th and returned February 19th. The gifts that we were showered with from our Blessed Mother were incredible. There is a castle in Medjugorje that is owned by a couple named Nancy and Patrick. Nancy is Fr. Jozo Zovko's translator. Fr. Jozo is the priest who saved the children from the authorities when no one believed that they were seeing the Blessed Virgin. 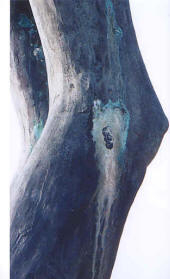 We were invited for breakfast Saturday morning along with some priests and nuns in our group. After a wonderful breakfast, Nancy asked us if we would stand in the middle of the kitchen, close our eyes, and open our hands. We thought we would be given a special blessing. We were known as the "newlyweds" and Patrick (my husband) was always asking priests for special wedding blessings.

To our own major surprise, Nancy gave it to us. We received a wedding gift from the Blessed Virgin Mother. Needless to say we couldn't find a scraper large enough to peel my husband Patrick off the ceiling!

That afternoon we went to the site of the Risen Christ. This is a fifteen foot bronze statue that has been exuding a substance that is a cross between saltwater and oil that drips from the knee. This has been happening since the apparition's 20th anniversary (2001). A friend of ours was here about six months prior and she had this liquid tested. It came back human tears. We believe that when Jesus was crucified, our Blessed Mother was 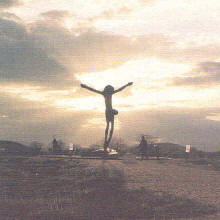 holding him around the knees, and that these are the tears of our Blessed Mother. We wanted to bring home some of the handkerchiefs with the tears to those who were sick.

It was approximately 3:00 p.m. when we went and we brought us ten white and ten blue handkerchiefs to absorb the liquid. Also note that at sometimes this oil smelled like roses. My husband Patrick tasted the liquid and said it had a salty taste, like tears. We noticed that between 3:00 and 4:00 p.m. (the Divine Mercy hour) the liquid ran out instead of shedding several droplets every ten seconds.

Patrick was taking each handkerchief and soaking it with the "tears." he handed it to me and we both noticed there was blood on it! The first thing Patrick said was "bronze does not rust." It looked like blood and water mixed.

We took it back to the house where we were staying at to show everyone. We are still in shock. When we arrived home I had no idea where we were going to keep the heart and the blood soaked handkerchief. By accident I noticed a small hat box and mentioned to my husband I must have purchased this during my compulsive days, because I do not remember buying it. Patrick commented that it would be perfect for our heart and handkerchief. What I did not notice was on the top of the box was a blue butterfly [seen at other sites of apparition]. Perfect."

[Andrea Toto-Walshe is from Long Island, New York, and works for a financial firm]