AMONG MANY THINGS, ANGELS HAVE HIDDEN ROLE AT THE 'GATEWAY' OF OUR SPIRITUAL PERCEPTION

We are certainly in trying times for the Church (also the rest of the world), and there have been major disappointments (as occurs with humans). But the foundation is unshakeable and mystics "observe" things at the Vatican that we usually can't -- for example, one woman who claims to see angels on a constant basis (since birth) says she witnessed angelic beings in greatest profusion at the Vatican. "In St. Peter's Basilica it was fantastic," she recently told us. "I just saw so many angels there. And what an experience I had near the statue of Jesus and Mary [the Pieta]. It seemed to glow and come alive.

When the Pope looked out from his apartment, she says, the angels were so numerous -- and "so much larger than him" -- that they "seemed to cover the entire building."

It is for our discernment. Could it really be true that some folks see spirits and angels continuously -- as do many children, until they are taught not to?

We always have to be careful with mysticism and especially anything that handles a spiritual dimension with such depth. But there are some points to be made. We are told that each person has a guardian angel whether or not the person is a saint or sinner, a devout believer or an atheist. No one is without one.

Guardians watch over those matters and guide us from the material. They feed our intuitions. In communication with God, they raise our spiritual blinders, when God so wills (enabling us to see "backstage"). On occasion, they allow us to sense the deceased. Some see guardians as always two steps behind us, with other angels occasionally joining them to help us in various trials or tasks. The guardian allows other angels to enter.

And they truly do "guard" -- not only against evil (which in our day are also in profusion) but also by way of our perceptions:

They guard the gateways of what we observe -- sometimes allowing us to see into the otherwise invisible dimensions, so we may understand what is transpiring around us.

On occasion, that means experiencing --and sometimes seeing -- the presence of demons.

Think of the way perception works -- how it has worked in your life -- and meditate on how much of it is controlled -- in prayer -- by the Holy Spirit, Who clears our vision, often, one might surmise, through angels (Who are in constant touch with the Holy Spirit because they are in constant prayer and Adoration). They clear misperception created by the enemy (which occurs more frequently than you may believe). 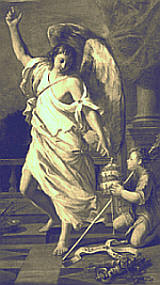 They come "in all kinds of sizes: sometimes they would appear as a spark which would then grow and open up to full size; sometimes they would be massive, much bigger than the person they were minding," says the mystic. "The guardian angels were radiant and were often dressed in all gold or silver or blue, or wore a variety of colors."

Only with prayer -- and fasting -- do we discern. The Bible tells us to test the spirits and keep what is good, tossing out of a revelation what we do not discern as good (but not necessarily tossing the baby with the bathwater).

Right now, we are told by mystics, God is pouring down angels. Mostly, they are underemployed; we forget to call on them!

Angels do heal; we recall Raphael. But most of the healing isn't physical; it's emotional; it is spiritual. And it is available to us all through Christ and His angels.

[Resources: In the Arms of Angels]