Large St. Benedict Cross, not the ordinary medal,  but for our time, a larger seven-inch, well-made cross from Archbishop Philip Hannan's group, made in Italy, with a very substantial and holy feel  as no piece of jewelry but a real tool of defense in your home!  Bigger than the palm of your hand, it is nonetheless the official and sanctioned medal. Do we recommend it? We have them for our personal use, and hope everyone does the same at a time when sacramentals are so crucial as a household shield. A GREAT gift.  click here

ANGELS THEY ARE HEARD ON HIGH, BUT ARE THEY ALSO OCCASIONALLY 'CAUGHT ON TAPE'?

It's the angelic time of the year (really, isn't every time?), and thanks to the internet, there's more information -- and more claims of encounters with them -- than ever.

For many years, we've had articles on "mysterious strangers" who show up to help someone, often with an unusually bright countenance, smiling happily, or serious when the situation warrants, and able to get said person out of a fix -- whether helping with a flat tire or in just the nick of time pulling someone from a car wreck.

There are far too many of these accounts to dismiss.

But what about other claims? What about more extravagant assertions, such as those who think their cameras have captured light formations that represent angels?

Here's one video report on YouTube. One is supposedly of an angel captured on film at a place called Woodchester Mansion in Glouchester, UK. Authentic? And if so: a good angel (remember: the devil can come as an angel of light).

This, we're told, was actually an image on a rock video (not supernatural; above left).

In Indonesia, the security camera at a mall supposedly caught a very angelic-looking light landing for a fleeting moment, followed by what were apparently onlookers racing to the spot where it was, as if to inspect what had occurred. (Could their flashlights or some other reflection have caused it to begin with?)

You be the judge (and jury). (Here's that one; always be careful of the side stuff on YouTube; best to keep the eyes away from any but the main video, as well as avoiding the comments).

That's followed by an interesting formation of bluish light captured on a hunting camera (which takes pictures when triggered by a motion sensor).

Some seem like superimposed images, or possibly a hoax.

On the internet, would that surprise you? 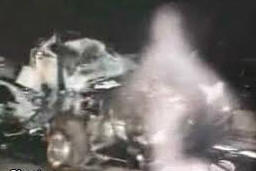 Angel at the scene of an accident? (It can feel a bit spooky; at left from World News Net). A bit ghostly.

Another light formation with what seem like wings hovered over a man who had just recovered from a heart operation, and was looking at some ducks in a pond.

Did an angel also engulf a home that had survived a hurricane with minimal damage?

Can't say we see images in other videos.

"I think what really proves an angel," said one man who studies this, "is the effect it has on the people." We'll go along with that. Does it seem sometimes too much like fairies? The one to the left was on Pinterest (from Florida), along with other photos.

Was this twelve-year-old named Josiah Lamb saved from decapitation by angels and the Voice of God?

Did a towering angel save a woman in a car teetering off a bridge?

Remember the one we had years ago about a corridor camera at a hospital catching a very interesting white light near the room where a young woman in Charlotte was dying of pneumonia [see here]?

A cell phone picture of it was taken of what appeared on the camera.

The girl, named Chelsea, immediately began to recover -- in a totally unexpected way (her siblings had come to say good-bye).

[resources: Books on angels and New: What You Take To Heaven]