IN WEEKS LEADING UP TO FEAST, IT PAYS TO RECALL POWER BEHIND CARMEL, SCAPULAR

Next month is the feast of Our Lady of Carmel, and perhaps we can begin to appreciate that devotion in the weeks leading up to it.

How many of us have a Scapular -- or have replaced ones that have worn out? How many at least maintain one in the night-stand?

Our Lady appeared as the Virgin of Mount Carmel not only in the final  vision of Fatima, but also at Lourdes. Bernadette said "she had never  seen her so beautiful."

As one website has written: "'Carmel' means 'garden' because the Mount Carmel headland was always green with life, as its heights dominated the semi-arid plains around its base. Metaphorically, it is the 'garden enclosed' of the Song of Songs, which [kind of relates to] the Church as the Bride of the Lamb, and  simultaneously of the individual soul with its Bridegroom-Savior.

"The Virgin of Carmel wears robes of brown -- the color of the earth, of  humility -- showing that she is the humblest of God's creatures.

"She, typifying not only the Church, but also redeemed Creation,  wears the white mantle of salvation given her by her savior-son. The Scapular  is an apron, the garb of a servant; it is formed like a yoke, which her Son said was 'easy, and His burden was light.'" 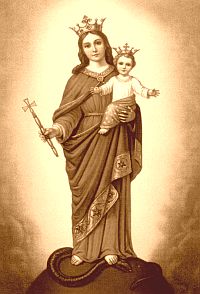 Perhaps, leading up to the feast, we can secure Scapulars -- as the Virgin of Mount Carmel is God's true help-mate  (as Eve failed to be) -- making herself servant to the work of the Redemption accomplished by her Son. "She is crowned as  Queen of Heaven to show the power and glory God has conferred on her," notes that site. "As a mother clothes her children, so she offers her  garment of grace to each of her children who will accept the brown Scapular.

Does it really protect?

Take it from our viewers! 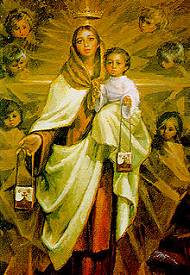 Writes Debbie Crosby of Madison, Ohio: "After reading your article on the feast day of Our Lady of Mount Carmel [some time back], I felt compelled to write and share my own scapular story.

"I not only wear the Scapular but made it a habit years ago to hang one on each doorway entrance of our home.

"Several years back in the middle of the night we had a fire that started in our finished basement.

"I awoke around 3:00 a.m. and thought I smelled smoke but figured I was crazy and tried going back to sleep yet something nudged me to wake my husband and have him investigate.

"He no sooner got to the end of our hallway and was yelling to get the kids up and to get out of the house and call 911!