Night after night, we are stunned to see the new nefarious innovations in movies, internet, or TV, and actors (or singers) who seem outright possessed -- if you will excuse this excursion into hopefully-not-presumptuous discernment. It is true, we all have "logs."

But is also true that it has gotten obvious.

Rock stars openly trumpet the occult. There are satanic symbols. And tattoos (everywhere). Look at what is now on display at Mardi Gras, and you have a snapshot of segments of modern morality. Restrooms now for transsexuals!

In the U.K., a recent poll indicated that twenty-five percent of the public -- eleven million -- felt it had encountered a "ghost" (in many cases, it is a demon). In the U.S., movers-and-shakers from around the globe meet every summer for a secret retreat whereby an owl [see: Molech] speaks to the group and a human effigy is burned (for "laughs"). Perhaps it's not as funny as they think. The same company that worked to create atomic bombs and PCBs now genetically modifies the seeds from which we produce wheat (our bread), recreating Creation.

Meantime, it is okay to be publicly blasphemous.

Disdain for religion is acceptable; the Crucifix is not.

And so we can say (in the the interest of the truth, which sets us free):

The evil one is showing his shameful face. It is the hour of the power of the devil. We are upbeat here. We know the glory of Heaven -- which awaits. But we will not sugarcoat the situation. Nor do we forget that Jesus came to earth precisely to destroy the works of the evil one -- and was Himself tempted with everything that Satan had tot throw at Him, though the Lord withdrew to the desert and fasted to defeat those very temptations. With prayer, with fasting, we break bondage and see beyond the deluge of modern factoids and pretense and humanism.

For mainly, evil has become institutionalized. The great surge of darkness that welled up during the 1960s has grown so pervasive and refined that often we no longer take note of it. How many in our modern society are worldly -- following what is human, and evil, instead of what is Godly?

"Dear children," said Mary at an alleged apparition last week. "My motherly heart suffers tremendously as I look at my children who persistently put what is human before what is of God; at my children who, despite everything that surrounds them and despite all the signs that are sent to them, think that they can walk without my Son. They cannot! They are walking to eternal perdition. That is why I am gathering you, who are ready to open your heart to me, you who are ready to be apostles of my love, to help me; so that by living God's love you may be an example to those who do not know it. May fasting and prayer give you strength in that and I bless you with motherly blessing in the name of the Father and of the Son and of the Holy Spirit."

The Queen of Heaven once also said:

Look what has occurred since those messages. 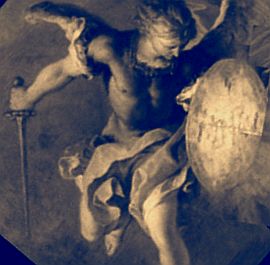 And they in sync with a well-known prophecy by Pope Leo XIII (who said a century had been granted to Satan), as well as with Howard Pittman -- a Baptist minister who had a law-enforcement background in Louisiana, Maryland, and Texas and who "died" on August 3, 1979, when his main body trunk artery ruptured.

During that experience, asserts this former police officer, he was shown the normally invisible workings of demons.

"The majority of the time Satan is denied special permission [to spread his touch], but in these last days we can expect a substantial increase in demonic activity, not only in adults but in children as well. This increased demonic activity is what the Lord warned us about in Mark 1 3:22 when He spoke of the incredible miracles that prophets would work in the last days.

"In this age we must be on guard for Satan's fiery darts of deception and temptation that are allowed within the limitation of the Lord's permissive Will.

"There is a time limit set by the Lord in which the demons may work, but that time period has not yet been fulfilled.

"Demons are real individual spirit beings and they are the ones manipulating all the evil in the world today.

"The great spiritual warfare that rages today is between the spirit of man and of the spiritual forces of evil directed by Satan which are contending for control and manipulation of our fleshly bodies."

Fascinating it is how very similar (heightened activity, a specific time period, the spirit of man versus the Holy Spirit) this Baptist-minister-near-death-experiencer is to apparitions that the vast majority of Baptists (and many within various Catholic factions) would reject out of hand. Concludes Pittman, who was a policeman for twenty-five years, "It may seem to you that mankind is vastly overpowered by these spirits because these spirits are able to see and hear everything we think, say, and do, while we are totally unable to perceive any of their activities. It is very difficult to fight an enemy you cannot see, hear, or feel, but as long as you trust the Lord, you have nothing to fear."

In whatever denomination, to this we can say, with ashes on our foreheads (such power!), and Christ in our hearts:

[see also: Television travesty: is this for real?]