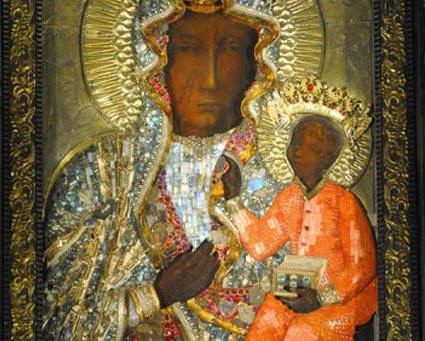 In Africa before the Blessed Virgin Mary appeared in a Church-sanctioned apparition there was a horrible outbreak of the blasphemous. As Bishop Aloys Bigirumwami of Nyundo remarked, "I can't help but mentioning the diabolical fury directed against the Mother of God between 1979 and 1981 (the year the apparition began at Kibeho). The wild iconoclasts removed and broke all the statues which were in the churches and at the crossroads throughout the whole of Rwanda, yet the voices of those in authority were not raised in protest at such sacrilegious acts." No one ever found out who was behind what seemed like a coordinated campaign but the point is that it immediately preceded the apparitions of Mary, who came to warn about materialism and sins of the flesh and presented dramatic warnings to both Rwanda (which soon found itself in a horrible genocide) and the world, which is now seeing its own version of sacrilege. Over the weekend, on the day after the Feast of the Immaculate Conception, one of the very holiest and most miraculous images in the world, the Dark Madonna of Częstochowa, was attacked by a man who tried to ruin it with black paint (thwarted by its protective glass). This is an image that many believe dates back to the first century and was painted by Saint Luke on cedar from a tabletop once used by the Holy Family. It was damaged in the 1400s by Hussite

raiders who inflicted two slash marks and was later repainted or retouched (accounts vary) on the same sacred wood. The image also was reportedly slashed during an invasion (thus two facial slash marks). In it, Mary points to the Child and wears a robe decorated in fleur-de-lis (with an iris or lily as design) -- as is also true for the miraculous image of Guadalupe in Mexico, which is celebrated this week and which was almost destroyed in 1921 when Masons planted explosives in front of the tilma, a

bombing that was so powerful it twisted a metal grate in front of the image but didn't harm the image itself. While there always has been such desecration and vandalism (in 1972 a mentally-disturbed geologist attacked the Pieta with a hammer), the current time has seen widespread damage of statues -- particularly of Mary, often of Jesus or saints -- at churches, shrines, and cemeteries across North America, including the tragic destruction of an inexplicable reflective-like "stain" across nine panels of glass on a mirrored office building in Clearwater, Florida, that perfectly fit the silhouette of the Guadalupe image, but in huge style (it was broken by a young man with a slingshot). In Chicago, vandals threw paint on what some saw as a miraculous form under a bridge, and in New Jersey, a vandal attacked a makeshift shrine that centers on a tree stump where others see Mary, as if the miraculous nature of an event can be judged by the diabolical fury against it. This all has joined the annual attacks on Nativity scenes, kidnappings of the Infant, and campaigns to push Christmas out of the public square. Though not as direct or widespread as the Rwandan vandalism, the blasphemy in the United States, Canada, and other Western nations is arguably as bad or worse, considering highly publicized instances where artists have placed a Crucifix in a jar of urine or painted the Blessed Mother splattered with elephant dung -- these on public display in museums and given widespread viewing by way of modern media, bringing the vandalism into every home and perhaps with it portents similar to those in Rwanda.

[resources: The Last Secret, Our Lady of Kibeho, and Queen of Peace video]