If you really want to become paranoid, visit the Denver International Airport -- or so we are told, and so we see in photographs. Although we usually avoid pictures with a negative connotation, in this case they are central to a question we pose to the government: what is going on here?

We're not saying that anything is. But some mysteries seem in need of better explanation.

For example -- and this seems particularly pertinent (what with release of another unfortunate Dan Brown novel, this time glorifying Freemasonry) -- why all the Masonic symbolism at the airport? It's undeniable. It isn't just an imagining of abstract artwork. Take the very capstone of the airport (left and right). It has the classic Masonic square and compass. How come? Just asking.

On the capstone it mentions the  "New World Airport Commission." What's that?

There is, famously, the demonic-looking "horse of the apocalypse" at the airport -- a sculpting that has disturbed and even frightened travelers, especially children, who have asked if it is the devil's horse.

Why would you want a sculpting like this at the airport? Did you simply hire an artist who went haywire (and whom you were afraid to correct)? Or -- as it has been reported -- was he given design orders for the artwork?

Oh, let's face it: you can take some misconceived design and go crazy with it. Denver is a huge hub. It was trying to be modernistic -- the most modernistic, no? It is a bizarre attempt at futurism, we tend to believe. (No?) Or perhaps related to the Denver Broncos?

Whatever the case, it serves no aesthetic cause -- for sure -- and is actually upsetting -- just what a jet-lagged traveler needs. Residents are also said not to care much for it.

"Blue Mustang Sculpture Shocks Visitors, Perturbs Poets; 'Because of This Thing, People Think They Are in Hell,'" said a subhead in The Wall Street Journal, quoting one woman, Denver resident Samantha Horoschak, as saying: "It looks like it's possessed. I have a huge fear of flying anyway, and to be greeted at the airport by a demon horse -- it's not a soothing experience."

And that's still but the start. Why all the esoteric symbols on the floors? What purpose? Who went haywire with creativity? It seems too brazen to be a plot. And why the truly bizarre murals?

One showed an African woman, a Native American woman, and a blonde girl with a Star of David on her chest and a Bible, each dead in a coffin. Huh? Another: a burning city, a line of mourning women in rags (with dead babies), a huge, Darth Vader-like military figure brandishing a massive sword that stabs the back end of a dove while in his other arm is a machine gun. Very welcoming!

Denver, what is it? Is it the New Age influence in that region?

oincidence? We're ready to accept the notion of coincidence, at least in large part. It is a coincidence, no doubt, that the runways form what look from the air like a swastika. Who would represent that?

It is too bizarre to be a conspiracy, too up front, to be intentional, correct?

We'll accept that, even though parallel runways have long been known to be the most efficient. But we do have to ask: why was a major part of the runway -- far bigger than is needed -- covered with four inches of earth?

This really seems too conspiratorial. And yet it is not the only thing buried. During construction, several large structures were built and then they too were buried, with the explanation that a massive mistake had been made and the buildings had been put in the wrong place. The airport's original budget of $1.7 billion eventually swelled to nearly five billion, with curious involvement, it was charged, by the military.

Some go so far as to claim there is an underground base as well as a large detention area. This gets into the "fringe" stuff. We know. At the same time, a reported 110 million cubic yards of dirt was moved -- a third as much as for the Panama Canal.

Please: a bit of explanation?

Surely, there are engineering reasons. The airport is designed for a hundred million passengers a year (currently there are 38 million). Just tremendous foresight? To many, the "old" Stapleton Airport seemed more than sufficient. Meanwhile, another little coincidence is that the huge main terminal (1.5 million square feet) is known as the Great Hall (a Masonic expression).

Maybe there are simply a lot of architects (haven't there always been) who are Masons?

Is it a case of simply being too cute by half?

Some conspiracists go so far as to claim  that areas of detention have fence with inward barbed wire and theorize that Denver has been designated as "the Western sector of the new world order." We hate going there. It seems too cut and dry and -- paranoid.

Some assert that the underground base is eight levels deep and that there is a 4.5-square-mile subterranean city. Hey, if this is a precaution in the event of apocalypse, fine: just let us know, since so much already is known.

Oh, the outside: very futuristic. We'll pass calling it a "new age cathedral." That has become hackneyed. But why are there gargoyles? If nothing else, what was ruling the subconscious of the designers?

"And I looked, and behold a pale horse; and his name that sat on him was Death, and Hell followed with him. And power was given unto them over the fourth part of the earth, to kill with sword, and with hunger, and with death, and with the beasts of the earth."

That's from Revelation 6:7-8 and fits with both the horse and the horrid sword and war images. Why is that in an airport? Is it simply an artist's call for peace? Perhaps. Artists are given a certain license, and they can be inspired by the wrong spiritual source.

There are said to be murals that since have been painted over, because they were too disturbing.

Complains one blogger: "This girl [left] holds a Bible and a yellow 'Juden' star used by the Nazi to identify Jews. It seems to symbolize the death of Judeo- Christian beliefs. The group at the origin of the imagery of this airport are definitively not Christian or Jewish. Secret societies have their own belief system that is way too complex to explain here. I can however tell you that caskets are an important part of Masonic symbolism as you can see in the next image depicting the main symbols of Freemasonry. Tombs are also a big part of the Skull and Bones’ rituals." Oh, gosh: do we need to go there? Isn't it simply a stream of art indicating first the evils of past wars and things like Nazis with the ultimate triumph of peace and mankind going back to nature?

Probably. But why is there what some interpret as a Mayan girl with a tablet [above, right] depicting, perhaps, the apocalypse? Do we have to wait until 2012 (only kidding) for an answer?

Is it like the Georgia Guidestones? Is it prophetic -- showing a coming purification?

There are explanations: The city and county built the airport (not the secret military, according to reports), and it seemed they were thinking a bit too futuristically as well as a bit too big. Some conspiracists point to arcane words on the floor as satanic or Masonic (Cochetopa, Sisnaajini, and Dzit Dit Gaii), when in fact they are simply Navajo terms for local geographical sites. Two other "creepy" names are only the names of artists who worked at the airport (Braaksma and Villarreal).  Why does the cornerstone say "New World Commission"? A group of local businesses chose the name, we are told, because Denver was aiming to create a "new, world-class" city and airport.

As for cornerstones, it has been ritual for Masons to lay cornerstones for centuries -- and they are in place at the U.S. Capitol Building, the Statue of Liberty, bridges, churches, and university buildings across America. It may be simply a political bow to a local affiliate of Freemasonry with a history of exactly that: masonry.

The underground infrastructures, officials claim, are for future use or in case of inclement weather. Vast tunnels, holding areas for prisoners, strange radiation? 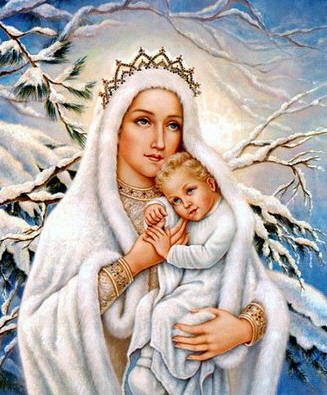 All are denied. The covered runway was due to swelling soil from a high concentration of bentonite (which caused numerous cracks in the foundation).

In the end, there is a painting that seems to show peace and harmony triumphing over "Darth Vader." Perfect. No?

But oh, Denver! Comforting art and architecture are not your forte! To your credit, some has been painted over. How about, in a place that gets some snow, and has many wonderful Catholics, a mural like this (right)?

Just strange taste? Probably, but it could use a little Holy Water: we urge travelers to sprinkle some when they pass through, along perhaps with some Blessed Salt (as they rush to the gates).

As for airport officials: why not explain what more may need explaining and paint over the rest?

[video: conspiracy theory of airport, Airport anomalies and Georgia Guidestones; also: Will Irish court case rock Masons? and Why you can't be a Mason]

[prayer need: Sculptor of Denver horse crushed to death by it]