BOOK THAT INSPIRED ST. THÉRÈSE DISCUSSED HELL, ITS LOCATION, ITS REASON, AND IN THE END WHETHER CONDEMNED ARE DEMOLISHED 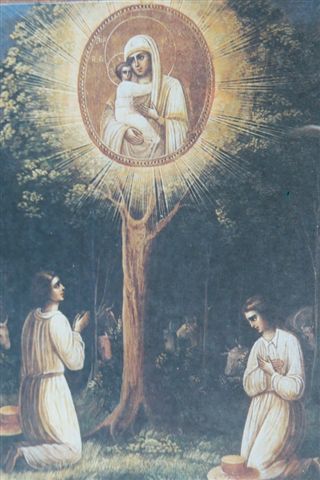 Where is hell? Is it really "forever"? Or does God eventually destroy souls that are condemned? Can a soul in hell one day find redemption? Should we pray for those in hell?

Those are certainly weighty questions, and they are addressed -- for your discernment -- in a remarkable book we have written about, The End of the Present World (and the Mysteries of the Future Life), by a French priest, Father Charles Arminjon.

We have paid attention to this work because it was strongly endorsed by a doctor of the Church, St. Thérèse the Little Flower (who was said to even have gone into ecstasy over passages on the afterlife).

That ecstasy, decidedly, was not over the discussion of hell -- a topic many seek to avoid today. In a way, it is good not to become obsessed with it: those who become attached to a morbid preoccupation risk avoiding the Light when it is time to enter the embrace of God (for fear of judgment) and may cause themselves an unnecessary snare in the transition.

Remember above all that God is a merciful God and that according to a myriad of mystics and teachings, He always offers a final chance at the last moment -- an opportunity (even for the great sinner, or atheist) to accept or reject Him. 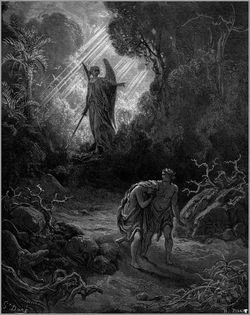 When there are problems, the believer most often finds himself in purgatory -- where it is said that the majority go. And once in purgatory, a soul is "saved": it will eventually find its way into Heaven.

But at the same time, we can never ignore hell. That too is dangerous. We must find balance (as Thérèse did).

In Father  Arminjon's view, "it would be the height of folly to convince ourselves that if we turn our minds from this fatal possibility and try hard not to believe in it, we shall manage someday to avoid its rigor."

There is a peculiar resistance to the notion  of hell, he pointed out.

And rigor it is. One never escapes, wrote Father Arminjon -- who also said that "mercy is excluded from hell" and that "redemption cannot reach it."

If souls could escape hell, argued the priest, there would only be three ways for that: by a true and sincere repentance; by the power of prayers and works of satisfaction offered up by the living; or else by destruction of their existence -- by making the condemned cease to exist. In His mercy, does God destroy -- obliterate -- unrepentant souls (so they do not suffer for eternity)?

The priest argued that penance is impossible for anyone evil enough to have earned hell, and added that they cannot share in the "prayers and merits" of the living. Even on the day of judgment, he posited, the Church "will not pray for those sentenced by the just Judge to everlasting torments."

"Finally," he argued, "the sufferings of the reprobate will have no end, and their existence will never be destroyed." He quotes St. Gregory as saying that "it will be a death that will never be consummated, an end always followed by a new beginning, a dissolution that will never bring decay."

In hell, wrote the French priest, "a thousand or a hundred thousand years no longer have any significance: they are less than a grain of sand in the desert, or a drop of water in the ocean."

No one doubts that hell is a solid doctrine. The debate sometimes arises -- surprisingly -- about whether it is forever forever (or "forever" as a manner of speech).

We say simply: consult the Catechism!

Without hell, said Arminjon, there would be no Heaven. It is the fear of hell that keeps many on the path to glory.

"To form a better idea of their lamentable fate, let us imagine a town where the Cains and Neros and all the other wicked men who have defiled the earth -- men whom human justice gets rid of by casting them into dungeons and convict prisons -- were put together. Let us further suppose that in this town there were no police or military to prevent these wretches from killing and tearing one another apart.

"Well, that would be hell such as it is described by the prophet Job," wrote the priest.

The second punishment of hell, he said -- in this obscure book only recently translated -- is fire.

How can hell be fire, some have asked, if Elijah called fire down from Heaven, or God appeared in a  burning bush?

Why would Jesus use an expression like "all will be salted by fire"? Is not fire more a representation of refinement (purification)?

"The fire of hell has the same principle as earthly fire, but is distinguished from ours by its properties and purpose," wrote the 19th-century priest [see previous article]. "The fire of earth is a gift of Providence and was created for our use; the fire of hell is an instrument of Divine justice and was created to punish. The fire of earth burns and consumes; the fire of hell burns without destroying or consuming." Without fear of it, he wrote, there are men who would trade two million years in purgatory for a seduction here. In other words: the fear of hell is often the ticket to a good life (if we do not obsess on it). Fear, but not obsession.

Is hell at the center of the earth?

The priest was inclined to believe so. He says most theologians thought so. St. Gregory called it the "lowest place." The Bible also used words like "bottomless pit." Is it really equated with a physical dimension?

Heavy questions here! The location, says Arminjon, is not an undeniable "truth of faith." There are many mysteries! They will be answered when we are on the other side of the veil. With belief in Jesus -- if we follow Him -- we don't have to fear hellfire.

We see here the final mercy! It is a hope beyond hope. So simple. So powerful.  Love always casts away fear. Love God and through Him the people of this earth and you will not have to fear Gehenna (or Sheol, or whatever else one calls it). St. Thérèse did not hover upon hell. Her ecstasies came in the passage from the book on Heaven (which we will review shortly).

Her mission was the ticket: love.

"A man's last hour finally rings; most often it is preceded by illness; the premonitory sign of his approaching end," wrote Father Arminjon in The End of the Present World. "This man is obdurate. One minute before his last sigh, God still offers to take him to Himself and save him from the fires of the abyss. His voice has no more strength, and his condition is desperate.

"It would be enough that -- in the intimacy of his heart -- he should utter these simple words: 'I love you, and I repent.'" Says Father Arminjon, "These words would be his saving grace."

[resources: The End of the Present World (and the Mysteries of the Future Life]

[Next week: what the book says about Heaven]