World-famous seer Maria Esperanza, attached to one of the very few Marian sites of apparition approved by the formal Church in recent times, and widely considered the greatest mystic since St. Padre Pio, died Saturday at 4:36 a.m. after a long bout with a Parkinson's-like ailment.

Esperanza, 75, has been in a semi-comatose state since July 6, when she was rushed to Southern Ocean Cou

nty Hospital near the shore in New Jersey, where she has been staying since last Christmas. Her home is near Caracas, Venezuela.

Tightly clinging to life, the mystic had made a remarkable rebound from that episode and an earlier one on April 20, but finally passed Saturday in a private home with all members of her immediate family -- husband Geo, seven children, and all her grandchildren -- gathered at her bedside. Her death was accompanied by the strong fragrance of roses and preceded by dreams experienced by those close to her, including son Giovanni, who rushed to her bedside from Venezuela just days before. 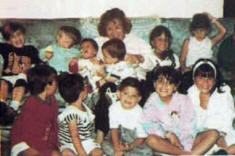 With her especially was dedicated husband Geo, her closest companion in life and a man whose spirituality approached hers. He stated that her death brings not the end but a "new dawn."

She and her family had been staying at the private residence in Long Beach Island. A Mass had been concelebrated by four priests Friday evening in the home, at which time the Precious Blood was brought to her lips, causing what witnesses said was a noticeable response from the mystic, who was known for her healings, visions, stigmata, bilocation, and an astounding array of other charisms [see her life story].

Esperanza was born on November 22, 1928. Her mother had desperately wanted a daughter (she already had three boys) and asked the Blessed Virgin Mary to grant her a girl. True to the prophecy of a local woman, who in an omen foresaw the birth of an extraordinary child, Maria was born in Barrancas on the feast day of Saint Cecilia, who is associated with music. The birth occurred while Maria’s mother was taking a trip by boat and in fact arriving at a port in search of better medical facilities. It was a very painful delivery, and during her pregnancy Maria’s mother had often prayed before a picture of the Blessed Mother – offering her child to Mary and promising to name the child Maria (Spanish for Mary) and Esperanza if it was a girl.

So came into the world “Mary Hope.” As a child she often played with dolls dressed as priests or nuns and at the age of five (while bidding her mother, who was taking a trip, farewell at the port of Bolivar City), the girl saw a smiling woman rise from the Orinoco River with a rose in her hand.

It was an alleged apparition of St. Therese of Lisieux, the “Little Flower,” and henceforth roses or their fragrance would hover about Maria. The rose St. Therese held was extraordinarily beautiful, a brilliant red flower that was “thrown” to young Maria. Her mother immediately proclaimed the rose a sign from God.

Such claimed phenomena – and soon much more – are difficult for even the seasoned believer to comprehend. They invoke legitimate use of words like “incredible.” In later years many around Esperanza were to witness other phenomena related to roses, including the inexplicable falling of rose petals.

Such occurrences were regular happenings around Maria. So are “coincidences.”  Feast days of the saints, especially those commemorating Mary, figure prominently into her diary. Esperanza received first Communion on July 16, 1937, the feast of Our Lady of Carmel, and soon after the young Maria encountered tremendous physiological tribulation.

By the age of 12 she had developed such an acute case of pneumonia that her doctor didn’t think she would live more than three days, but after prayer she opened her eyes and saw the Blessed Virgin. According to Maria the Virgin appeared as Our Lady of the Valley of Margarita (an apparition site off the coast of Venezuela) and told the girl what medication to take. During an especially severe illness in 1947 Maria was paralyzed for several months but miraculously healed upon a vision of the Lord. “At that moment something happened, which I know for the world is impossible to believe,” comments Maria -- who recalls that the instantaneous healing was accompanied by a startling tremor that shook the hospital.

There were other trials in Maria’s sickly early years, and during another episode Christ manifested to her and again she was healed.

On August 22, 1954, on a visit to Caracas, Maria had a dream about a place where miracles would take place and where there would be an unusual blue butterfly. This turned out to be the apparition site now known as Betania near Caracas.

The Virgin Mary told her that she had a cause to “help me to save this lost world,” and so began Maria’s journey. It ended in the United States, where she was said to be on a special "mission." One of her last acts was to visit New York and pray around St. Patrick's Cathedral in mid-town Manhattan. 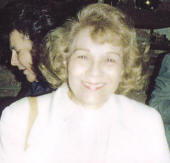 homeland of Venezuela, where there have been three days of private viewings at a chapel in her home and now will be three days of public viewing beginning Friday, after which time a tomb will be constructed for her at the apparition site of Betania, with Church participation. Esperanza, who died at 75 on August 7, was in the U.S. when she succumbed to a long-suffered nervous disorder. Current plans call for entombment in a glass case under an altar at the site, which has been officially declared by the Church as "sacred ground." Esperanza's canonization cause is expected to be put forth in coming years.

[resources: The Bridge To Heaven]

Seer Maria Esperanza To Be Entombed

The body of seer Maria Esperanza is expected to be transported to her homeland of Venezuela by Monday and eventually placed in a glass tomb under an altar at the Church-sanctioned apparition site of Betania near Caracas, family members told Spirit Daily.

They said there will not be a public viewing of the famous mystic in New Jersey, where she had been staying since last winter at a private residence and under intensive medical care.

Esperanza died last Saturday after a lengthy neurological ailment that bore resemblance to Parkinson's but was not specifically diagnosed. At her bedside at the moment of death were her husband Geo, her seven children, their spouses, and 20 grandchildren who flew in from Caracas, some just days before.

"We all sensed that something was about to happen and got up at about four a.m. to spend the rest of the night in her room," says son-in-law Carlos Marrero Bornn. "One of her daughters sang to her and she died an incredibly beautiful, peaceful death, with that smile she used to have when she knew something she wanted to tell you."

It's expected that a crowd will be at the Caracas airport to greet the body, which will then be placed in a chapel at Maria's home for three days of private viewing. That may be followed by a public wake, though plans have not yet been finalized. The family is looking for a church to temporarily keep the body while the crypt is built. Extensive documentation has been kept for the canonization process.

The apparition site of Betania was formally declared authentic in 1987 after the bishop, who was trained as a psychologist, personally investigated and took testimonies from more than 1,000 witnesses. A small grotto and church currently stand at the site, which is about an hour's drive from Caracas and the place of many claimed miracles. Bornn said the family sees Maria's death as a "sign" that may be followed by major events. Esperanza herself had foreseen 2004 as a momentous year and once had commented that a major event would occur after someone loved by many died.