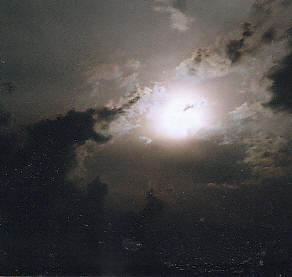 Have you noticed the increase in evil activity?

There are buses crashing during pilgrimages. There is constant vandalism of religious objects (most recently the theft of a statue of Mary by what is believed to be a satanic cult). In Texas, one church has been hit three times. In Florida, a student held a Communion Host hostage. There was the crashing to the floor in New York of an old and precious Archangel Michael statue (of course, every such statue is precious). There are fires at rectories and churches. There is our culture. Where to start? A "man" has a baby. A county political leader is arrested in a satanic cult bust. In Canada, the doctor who caused legalized abortion in that country is given one of the nation's highest awards. A fetus is found in a jar by a priest. Evidence of occult rituals litter a churchyard.

And there are people in general.

Have you noticed a stiffening,, how cold too many have become? Don't get me wrong: most folks are super. There are many in ways in which people have become more considerate. There is much friendliness. And we see Jesus in everyone.

But there is also this cold chill (especially in the world of corporations, which have all but made it impossible to speak directly with a human), and increasingly we notice the devil trying to instigate antagonism among all of us (especially during Mass or Adoration or pilgrimages, when he throws around disgruntlement, harsh words, and disorientation).

This includes groups that are religious: harsh words instead of conversation (when there is disagreement).

When we noticed an article last week on a good and devout family that had suffered a fire in their home, a foreclosure, and then the death of the father and a son through drowning -- all in a short period -- we had to wonder if evil was not attacking, if it went beyond coincidence.

Yes, it can be the run of bad "luck." Yes, there are the trials of life. But misfortune can also be the result of forces that would not cause damage if they were dispelled at their first indication.

Have you noticed such?

This enhanced demonic activity brings up the topic of an unspoken crisis in the Church: the near-eradication of discernment, deliverance, and exorcism. Time and again, I have seen cases in which people afflicted by demons have no recourse in their own religion.

That's because deliverance is treated as rare in our current time when it is not anything approaching rare. That is a misconception purveyed by wayward (and to be blunt clueless) seminaries. This is because there is now more emphasis -- vastly more -- on psychology than mystical theology, with priests often getting a separate degree in this.

There is a role for psychology but in both society and our Church it has been overplayed.

As a medical doctor, Joseph Mauceri, of Upstate New York, writes (in a book called Therapy or Theology), "The idea of little devils in our lives is most antipsychological but can you really suspend judgment on this in the midst of the evil that rages in our time? Satanic evil is the ultimate evil both in its deadly power and its treacherous seductions which so often seem quite apart from evil. Of one thing we are certain, however: this evil is beyond psychology and must be reckoned with absolutely by any religious system which proposed a complete and coherent view of man and evil in human existence."

While levitating, head-spinning possessions may be rare (or at least highly infrequent), the need for deliverance is not. Spirits move in and out of all our lives. They also move in and out of communities and neighborhoods and homes. We have forgotten how many times Jesus cast out demons, including from two homeless men who today would be considered "mentally disturbed" and a person suffering from seizure, which today would be completely written off as epilepsy (when, in at least certain such cases, there may well be a spiritual component). The same can be true of afflictions such as homosexuality: folks can often be delivered from this.

A tragedy it is when a person goes through life afflicted by something unseen because there is no one to help.

There are those who simply have "something" around them. It is not to judge how they got it. There are certain people whose very presence causes spiritual attack, and who are tragically (and naturally) shunned because of the feelings or effects they elicit.

These have no recourse. There are painfully few priests who can attend to such "lesser" manifestations.

I know of a situation where dramatically negative effects have occurred every time a certain person visits and often even calls, but what can you tell such a person? And how painful it is for both parties when such unspoken effects lead to a distance between friends or even relative.

If we had adequate deliverance, how many friendships might be saved, how many divorces prevented?

There are teenage girls who go through a hard time (in addition to hormones, poltergeists seem to accent those going through puberty). There are spirits that are attached to certain areas. There are evil entities that come through occult television shows, the internet, e-mail, sexual books, and other items that seem so "inanimate" (but can have spirits attached to them). Watch out for the games those kids play. Deep into electronic adventures are often occult signatures (the sudden predominance, at "higher" levels of a game, for example, of wizards). There are all the "UFOs." In Australia is a homosexual activist who will host a "queer kiss-in" during the Pope's visit. He wears a costume and mask that make him look exactly like an alien. Coincidence?

Astonishing it is how we live in a world where Christianity is being extinguished in places like England (replaced by the New Age) at the same time that witches are winning new rights and those who do perform exorcism or deliverance have been brought to court. In Brazil, a judge ordered the confiscation of a book that was written by a priest and exposes witchcraft.

What a challenging time! And we are supposed to be the Church Militant! Yet, we have been given no weapons, and don't even see the enemy.

What we need -- urgently -- is to bring back mystical theology to the seminaries. We need to instruct our priests -- young and old -- about demonology. We need to stop relying almost entirely on psychology, which sometimes covers over infestations with diagnoses such as "multiple-personality syndrome" and "psychosis" (among other maladies). We must expand the use of deacons. They can bless homes, as well as salt and water for our home use (which should be frequent).

Our Church must learn and then teach the congregation! We must realize the presence of evil when there is sudden aridity or anxiety or confusion or animosity -- realize the presence and in the Name of Jesus, cast it out. We must love, which is the greatest shield. We must hear about such in homilies.

Does your house suddenly feel uncomfortable? Are you plagued suddenly by antagonistic thoughts? Do you have nearly inexplicable friction with someone?

Read Scripture. Fast. Get your rosary. Go to Mass (especially Confession). Cast the spirit out.

Why has the Church disarmed itself?

It is another development that came out of the 1960s, when so much evil entered.

Why has a militant Church disarmed itself?

It is a question of the hour but one big step would be to reinstitute the prayer to the great Archangel Michael at the end of every Mass. Let us do this while there is a current trend toward Latin, while there are current hints on more reserved ways of taking Communion, while the Pope is reminding us of our heritage with sacred music -- or trying to remind us. Let us reinstitute the prayer and reclaim th at part of the liturgy.

Start with such and other matters may quickly fall into place.