'Third Secret' Remains A Fascination As Facts On Its History Emerge

Reaction to the death of Lucia de Jesus dos Santos of Fatima, one of the most famous seers in history, continues to reverberate. It landed here like a tsunami.

Has the final chapter on Fatima now been written?

We're not sure of that, but we are sure that there is still fascinating information attached to the famous third secret and its hidden history.

What's the truth about the third secret? How did the various popes react to it? How did it find its way to the Vatican?

First, a quick recap: It was on July 13, 1917, that Lucia, watched by thousands, was seen to converse with an unseen person at Cova da Iria in Fatima, along with her cousin Jacinta (now Blessed Jacinta). The unseen person, of course, was the Blessed Mother. The third seer, Francisco (also beatified), saw Mary's mouth move but was not allowed to hear her actual words.

This was delivery of the most famous prophecy since the New Testament and its drama was immediate. Those watching saw Lucia take a sudden, deep breath, turn pale, and cry out in fright.

When asked what had happened, Lucia said it was a secret -- and as a cloistered nun maintained that secret for nearly a century (until the secret was publicly revealed on May 13, 2000).

Not until Lucia penned her memoirs between 1935 and 1941, at the request of superiors, did the first two secrets become known. There were four memoirs, and Lucia revealed the two secrets in the third one.

But what was in the third?

That the secret involved a Pope was indicated early on when Lucia wrote about Jacinta's vision of a Pope in a house, kneeling by a table, burying his head in his hands and weeping. When Jacinta had asked if she could tell people about that vision (which had come privately, after the formal apparitions themselves, and was not part of the actual third secret), Lucia had admonished her that she could not, because if she did, the secret would quickly be discovered.

There was thus the hint from the 1940s on that the secret involved a Pope. But in what way? What did it say? And what about the world?

The other two "secrets" had included predictions about the end of World War One, the rise of Communism, and the beginning of World War Two. Were there equal catastrophes hidden in the third secret?

Despite a clamor to release the secret, Church authorities had kept a distance from the issue until 1943, when Lucia became ill with various respiratory ailments such as bronchitis and pleurisy, ailments that caused authorities concern and that would indeed be related to her eventual death of lung and heart failure -- but not for another six decades.

In mid-October of that year, momentously, Lucia's bishop, Jose Correia da Silva -- who was initially reluctant to press her on the secret -- gave Lucia a direct order to write it down in one of her notebooks. He said it was simply to record it, that it would not be published at that time, and Lucia felt that the time was right.

But mysteriously, the Fatima seer failed in her attempts to do so, taking up her pen but unable to write. This was later blamed on the devil. By January 1944, however, the nun had recorded the remainder of the secrets and viewed her difficulty as a test.

The text had now been written down, sealed in an envelope, and placed in one of her notebooks.

Although Lucia herself never acknowledged such, her superior, Mother Cunhe Mattos, stated in some written testimonies that the Virgin appeared to Lucia on January 2, 1944, and had authorized her to record the remainder of the secret.

Thus is the indication that apparitions of the Blessed Mother occurred on at least an occasional basis after the famous ones in 1917, a fact not widely known and part of the "hidden" history.

The secret was delivered in June of 1944 to the bishop, who did not really want to maintain possession of it and tried to pass it on to a higher authority, the cardinal patriarch. When that didn't happen, the bishop placed it in a larger envelope, sealed it, and wrote a note saying that upon his death, it was to pass to the Cardinal.

These facts we get from the scholarship of professor Sandra L. Zimdars-Swarz, who has closely studied the issue of Marian secrets and who relates in a book called Encountering Mary that for the next 13 years, the secret remained in obscurity with the bishop, removed only on rare occasions -- including in 1948 when the envelope was famously photographed by a reporter from Life Magazine. 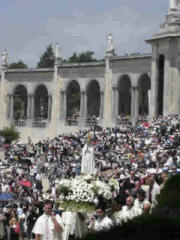 Fascinatingly, on October 31, 1951, American Bishop Fulton J. Sheen entered the picture. On that day, at Fatima, he predicted that the time would come when the symbol of the hammer on the Red Flag would look like a Cross, the sickle would be turned into the moon under Mary's feet (as represented at Guadalupe), and Red Square would be replaced by White Square (the throngs waving white handkerchiefs at Cova da Iria).

It was six years later, in 1957, that the apostolic nuncio to Portugal informed Bishop Da Silva that the Sacred Congregation for the Doctrine of the Faith in Rome was requesting copies of all of Sister Lucia's writings -- including the secret, which, as per request, was handed over in its original form.

Why was there sudden Vatican interest in the secret? Was it due to rising Cold War anxieties? Was it because Sister Lucia had once offhandedly mentioned that the secret could but did not have to be released only after 1960 -- when it would become "clearer"?

By this time, there was another issue on the scene: false versions of the secret, some of which still find their way into Marian literature. Most prominent among these was one published in a German periodical called Neues Europa in 1963.

The claim was that Pope Paul VI had arranged for the secret to be read by President John Kennedy, Soviet leader Nikita Khruschev, and the prime minister of England, and that extracts had been sent to diplomats, excerpts that the publication claimed to have obtained.

According to Neues Europa, it was just after the "great miracle of the sun" at Fatima on October 13, 1917, that the secret was conveyed to Lucia. The only problem was that Lucia denounced this version of the secret as false and the secret actually had been conveyed in July.

Mysteries remain. In the 1970s, a devout nun in Akita, Japan, would claim a similar prophecy granted to her in conjunction with a weeping statue, in fact a message that at times was nearly word for word (cardinal against cardinal, bishop against bishop) what was in the Neues Europa secret.

How is it that this sister had quoted the Neues Europa "secret"? Had she read it? Was she unconsciously quoting it? Was she herself given this message in a supernatural way?

Mystery remains. There are no answers to those questions. We know only that Sister Lucia specifically declaimed the Neues Europa version and that the third secret ended up not so much as text as a visual image of an angel set to ignite the world with a flaming sword, but halted from doing do by the Blessed Mother; it also included the image of a "bishop in white" shot by soldiers in a martyrdom.

A "bishop in white" would mean the Bishop of Rome, or the Pope. But which Pope? And now that it was at the Vatican, how did the popes react to the secret?

By one report, after it was secured by the Sacred Conregation, the secret, still sealed, was given to Pope Pius XII, who apparently chose not to view it and instead kept it in his private apartment, where it was photographed by a journalist from Paris Match. The reporter, Robert Serrou, said he saw it on a little wooden chest bearing the inscription "Secretum Sancti Officii" (Secret of the Holy Office). He was allegedly told what it was by a housekeeper who was giving him a tour.

Despite reports that Pius had read the secret and fainted, the most credible rendition seems to be that the secret, again still sealed, was delivered to Pope John XXIII in 1959 at Castelgandolfo. Pope John reportedly read it a few days later in the company of his confessor, Monsignor Alfredo Cavagne. Thus, unless superiors at Lucia's convent had seen it, these may have been the first two aside from Lucia herself who were privy to the entire text.

The content was also reportedly made known to the Sacred Congregation for the Doctrine of the Faith and to the Vatican Secretary of State.

Pope John XXIII is said to have commented that it did not pertain to his times, and that he would leave it in the hands of his successors. The secret was the taken to the Vatican and placed in a desk in his chamber, along with a note.

It has never been revealed what that note said.

We know only that Paul VI is also assumed to have read it but of course did not reveal its contents. No one knows if it was read by Pope John Paul I -- who had visited Lucia at Fatima before he was made Pope and died shortly after assuming the Throne of Peter.

According to reports, John Paul II -- who is widely believed to be the "bishop in white" (and who was shot on the Fatima anniversary of May 13, 1981) -- read the secret while recuperating at the Gemelli Clinic, where he was recently hospitalized and where, allegedly, after his shooting, he witnessed the miracle of the sun.

We know for sure that the Pope credits his miraculous escape from death at the hands of Mehmet Ali Agca to intercession from the Fatima Virgin, and that in a book to be released next month, the Pope ties Agca to Communists.

Thus had the three secrets, including the famous third one, for so long hidden, come full circle -- from a prediction in 1917 of the rise of atheistic Russia, from the prophecies that Russia would spread it errors around the world, and a  prediction that it would end only when Russia was consecrated to the Immaculate Heart, as requested at Fatima, to the eventual consecration of the world to the Immaculate Heart of Mary on March 25, 1984, and the subsequent, startling fall of that same Communism.

[Bookstore resources: The Final Hour, The Day Will Come, and Calls From the Message of Fatima]