IS IT TIME TO START GROWING SOME OF OUR OWN FOOD IN THE STYLE OF TIME OF JESUS?

Fascinating it was to receive a copy of the new book, Foods Jesus Ate and How to Grow Them (which we recommend). It was fascinating because it seemed so timely during a period of worry over synthetic manipulation of crops, contamination, and threatened food shortages.

Is it time for us to revisit the simplicity of His time and also consider growing some of our own food in a way that is more in natural harmony?

That's for the discernment of each one of us. It is not what folks usually think about, when they contemplate disaster. But, arguably, the warning signals have been everywhere. Food (or lack thereof) can be part of a chastisement.

In fact, for a while it nearly seemed like a "perfect storm" of food shortages was forming. 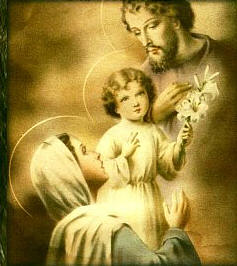 There is the crisis of honeybees: across North America, and now into Europe, bees that pollinate the plants we depend on for a high percentage of our food have been disappearing. Scientists are not sure yet what is causing that -- whether disease, chemicals, the techniques of bee farming, or all of the above.

There are outbreaks like salmonella: a few short weeks ago, people in the United States virtually stopped buying tomatoes for fear they had been contaminated. Will something else arrive to rekindle such fear?

There were the floods in the Midwest: while we may have dodged a bullet, great fear arose that millions of cropland acres would be lost due to inundation that would cause the price of corn -- already stressed by the demands for its strange use as a fuel (ethanol) -- to skyrocket (ditto for soybeans).

There is the price of fuel: this affects food costs from production to final delivery, while corn is used for ethanol -- straining supplies.

There are the demands from abroad: the British government recently urged its citizens to stop wasting food, citing the growing pressures on demand from rising middle classes in nations like India, which now also wants meat. Said the news: "With food and energy prices soaring around the world, a constant supply of high-quality, affordable food is no longer guaranteed, the officials are warning Britons. That could mean an era of scarcity like Britain's 1940-54 food rationing, during the war and its aftermath."

There are the genetically-engineered crops: these have as yet unknown long-term effects and yet are taking over natural cropland.

There is the issue of fish: all we need to know is that cod stock in the Atlantic off Newfoundland are five percent what they once were, and the stocks of other fish are plummeting (to the point where California recently banned salmon fishing altogether).

Can the Lord be happy with a culture that wastes between a third and a half of its food?

Look at what is left behind at restaurants.

Is it time to think of conserving it -- or even growing it ourselves? Do we have a two-week stock of canned and non-perishable foods in our homes, in the event of emergency? It is hurricane season!

Gradually, it is good to move toward self-sufficiency.

At a time when the transportation infrastructure could break down (we saw a small preview with September 11), there are those who are now using their yards, including their lawns, to grow certain fruits and vegetables, arranging such crops in an attractive style -- perhaps (in southern climes) around the gorgeous fig tree that symbolizes God's protection.

[resources: Foods Jesus Ate and How to Grow Them]

[see also: Britain urging return to wartime frugality, Why you will soon eat less, and Prices set to be high until 2012]