Mystery Of Vanishing Honeybees Points To How Chastisement May Be Unexpected

There is a mystery afoot, and it is the disappearance of honey bees. Across North America, and around the world, bees have suddenly just vanished.

Such was first noticed a year ago on the East Coast of the U.S., but is now encountered everywhere.

There are also severe problems with fish. Near urban outfalls, aquatic creatures have been found with no genitalia or both male and female genitals (or, males with female genitals and females with vice versa) as hormones or chemicals that mimic hormones have caused genetic defects (including excretions from the massive use of birth-control pills).

But let's get back to the bees for a moment.

Millions of bees have simply vanished. In most cases, all that's left in the hives are the doomed offspring. Dead bees are nowhere to be found -- neither in nor anywhere close to the hives. 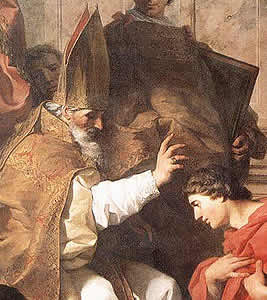 "They just disappeared," said one North Carolina beekeeper. "I have a few dead ones left but very few. Most of them, there’s just nothing there, and I have no idea why." [At left, Saint Ambrose of Milan, whose title, the "Honey Tongued Doctor," led to the use of a beehive and bees in his iconography, symbols which also indicate wisdom.]

In the past year, researchers and hive tenders in at least 27 states and Canada have noted a "catastrophic" loss of bees. As many as 700,000 of America's 2.4 million bee colonies have been affected, according to the Beekeeping Federation.

Bees may be a precursor -- far more important than most realize. Without them, many crops would vanish.

Interesting it is that shortly after her birth, another saint, Rita of Cascia, was found one day surrounded by bees, some of which were going into and out of her mouth without stinging her.

This episode, witnessed by many and called the "miracle of the bees," established between Rita and bees "a providential link," says one explanation, "that was not lacking in spiritual meaning."

Saint Ambrose offered the bee as a model for living: "See that your work is like that of a beehive, because your purity and chastity must be compared to hard-working, modest and continent bees. The bee lives on dew, knows not the vices of sensuality, and produces precious honey.

"A virgin's dew is the very word of God that, like the dew of the bees, descends, benevolent and pure, from Heaven."

Rita received from her parents a sound upbringing and solid religious formation, marked by devotion to the Holy Eucharist. In Cascia, the Corpus Christi procession takes on particular splendor. There the relic of an authentic Eucharistic miracle is venerated, which has been granted a deed executed and authenticated by a notary, preserved in the town archives.

Fast-forward to the present and the strange disappearance of the insects:

Might this or something similar occur as an unexpected "chastisement"?

That is the watchword: events that loom in the future may come in ways that are wholly unexpected.

"Experts fear that, because honeybees are responsible for eighty per cent of all pollination as they collect nectar for the hive, there could be severe ecological problems with flowers, fruit and crops failing to grow," explains a London newspaper. "In London, about 4,000 hives — two-thirds of the bee colonies in the capital — are estimated to have died this winter."

Bee pollination is relied upon for thirty percent of the U.S. food supply, with $14 billion worth of seeds and crops being pollinated by bees each year.

Some even claim that without the pollination of bees, our food supplies would run out in a matter of years. It's reported that Albert Einstein once said, "If the bee disappeared off the surface of the globe then man would only have four years of life left. No more bees, no more pollination, no more plants, no more animals, no more man.”

There is doubt about the authenticity of that quote -- and even if it's true, the accuracy of it (other insects also cause pollination) -- but a collapse of bee colonies could be more momentous than any hurricane or earthquake, causing a startling transformation.

Some point to possibility of mites that carry a disease, some say it may be from the rampant use of pesticides (now more common in the average garage than a spade), while others speculate that it is the result of genetically-modified plants or the microwaves from cell phones.

Our air is now filled with electromagnetism to such an extent that no one knows the long-term ramifications -- only that we have permeated the atmosphere.

Waves of electromagnetism now flow from our digital clocks, electric blankets, televisions, computer screens (if they are not flat ones or laptops), wireless transmitters, motors, and power lines.

Just last week a new study in Europe raised alarm over the effects of electricity on those living near high-voltage lines.

The question: did God intend us to live in such a soup of artificiality, or at least in artificial energy that was not uncontrolled?

The honeybee mystery is also plaguing England. "It's frightening," said John Chapple, the chairman of the London Beekeepers' Association. "The mortality rate is the highest in living memory and no one seems to know what's behind it."

We have noted a curious lack of other insects as well as fish, birds, and other animals. Time and again, the Vatican has underscored the value we must place on other creatures, but such has been all but ignored in the dash of materialism. At least an eighth of fish species are now in danger of extinction -- which some have long seen as a future sign of coming events.

Cod have almost disappeared, grouper are in trouble, tuna are vanishing from the Mediterranean, there are massive "dead zones" in the Gulf of Mexico, and deep in the sea, whales, dolphins, and sharks are in trouble.

Is it a chastisement of our own making?

That question has been blurred by the hijacking of the environmental movement by New Agers -- who distort concern for God's Creation into worship of Mother Earth, turning off Christians.

More and more, however, preserving what God made is seen as a pressing and perhaps even a prophetic cause. Some relate it to the Book of Revelation, or to Jeremiah.

"Whatever the specific causes, the mass death of bees is a curse brought on by mankind not living in accordance with God’s laws," noted one newsletter issued by  Church of God. "It could yet become a much greater curse, contributing to the famines prophesied in the Bible to occur on an epidemic scale at the time of the end, shortly before the return of Jesus Christ to earth."

What else might occur out of the blue? What else may arrive in a way that is wholly unexpected (while everyone focuses on known apocalyptic threats, like asteroids)?

As for our runaway electrical use: no one wants to live without air conditioning but it is time for us to be concerned about how the light of electricity too often has replaced the Light of the Holy Spirit and how technology has distanced us from God.