t's curious why some folks discount any notion that God might inflect signs in objects. He rules nature and when He does give signs -- whether in our personal lives, or for a community -- they are often subtle. A strange rainbow may appear during a funeral. A cloud may take angelic form.

Granted, we can make something of nothing. There is the imagination. And there is even a name for imagining images. It's called  "pareidolia." But of late, so many are claiming to see forms of Jesus and Mary that it is easy to lose track of them all and also easy to deduce that something unusual is at hand, perhaps even something of a prophetic signal.

In Iowa folks see an image of Guadalupe on a bridge. This had also happened in Chicago. In the case of Iowa, a five-year-old spotted it as he and his family were scouting out driftwood along the Rock River in Moline. "That's the lady of my shirt," said the boy, pointing to a form on the overpass (his shirt bore an imprint of the "Patroness of the Americas").

We could discount it as erosion or the frolic of shadows but for the number who see it and claim that various other holy figures have appeared and at times seem to glow (including Jesus coming out of the tomb).

In Saraland, Alabama, folks at the Triumph Learning and Worship Center, which was flooded during Hurricane Katrina, see the image of Jesus on drywall that has buckled.

This too would be easy to discount but for the sense of peace it bequeaths and the fact that healings seem to take place after touching it.

In the Filipino city of Escalante, it was the image of Mary and a heart on the trunk of a cotton tree.

You get the point. These are just cases in the past week. We are seeing a "sign of the times," if only a fraction are authentic.

When it comes to clouds, few recent cases have been quite so striking as the one above. There appear to be several images in it, some rather creepy and perhaps even demonic. Prince of the power of the air? It is interesting to see such a photo, in this case presented by satellite from the National Oceanic and Atmospheric Administration, at a time when the weather is swerving so wildly.

During hurricanes there likewise have been strange infrared or radar formations that grant us pause for reflection, forms that look like everything from a demon to an unborn child. Is the spiritual war -- is a snapshot of the supernatural -- often glimpsed in such photographs?

We live in a time that is spiritually dynamic. The reports of images join other phenomena. There are so many tearing statues that the number is probably now in the thousands. Police are currently investigating a bleeding statue in Italy. There are reports of bleeding Hosts -- once the rarest of phenomena -- in various parts of the United States and Canada (not just in Dallas, where it has been explained as fungus).

There is a piece of firewood that bears an image of Mary. There is the recent case of a seashell found in Mooresville, North Carolina, that looks like Mary and the Child. [bottom left]. Years ago we reported a similar case: another seashell  that looked striking like the Virgin [bottom right].

An image of "Jesus" on a table was sent by another viewer. But there are the questions. If it is supernatural, is that really is a small etching of him on the bottom right of the photo, is it of God? Looked at from another angle, according to Tim and Linda Hachey, who sent it, the face looks like that of an ape. Does it represent the devil aping Jesus -- or is it another snapshot of the spiritual battle?

Unfortunately, there are those who sell the images on eBay, or who create what seems like a mockery by imagining images in tacos or grilled cheese sandwiches -- granting late-night comedians free material.

Or is it all laughable? Just because an object is peculiar, or seems so run-of-the-mill, does that mean that it would not be used to transmit a message?

We certainly live in a time when by many indications God is trying to reach us in a special way. In one message, the Blessed Mother said she would appear in every home if necessary. Sometimes it seems like everyone has been exposed to some form of a manifestation.

The list goes on. Scientists scoff. Faith is in the eye of the beholder -- and that's how Christ has designed it. 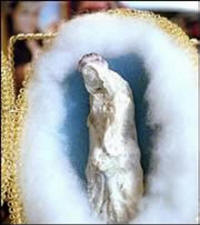 He'll give us hints, He'll work with nature in certain ways, inflecting Himself (usually in a subtle manner) on the reality around us.

But He always wants to leave room for faith. There is a seashell. There is an icicle that takes an interesting form.

The seller of that firewood?

Her name was Faith, no less, and admitting that she was by no means religious, she said she was astounded when she found the image of the Virgin Mary complete with halo staring back at her.

[pictured at top is floating church on lake in Cambodia. The church was set up in a village of fishermen, who all live in floating houses. Every Sunday, a Vietnamese priest celebrates Mass in Cambodian and they are often visited by western missionaries]