For those who subscribe to the apparitions at Medjugorje in Hercegovina (formerly part of Yugoslavia), the message emitted sparks. "I call you to gather into God’s family and to be strengthened with the Father’s strength," the Blessed Mother reportedly told seer Mirjana Dragicević Soldo of Bijakovići  during her monthly visitation on a hillside just outside of Medjugorje on August 2. "As individuals, my children, you cannot stop the evil that wants to begin to rule in this world and to destroy it."

Evil "beginning to rule" implied that the period granted to forces of darkness is anything but over (it was said in the early days of this apparition that Satan was granted a century of extended power, which some took to mean the twentieth century) and seemed to connect with lesser known alleged private revelations like the "1990 prophecy" we have often quoted -- which said a great evil was approaching and also that a nefarious personage would try to affect a new world order after the breakdown of "false society."

That might be connected by some to the events we now see as precursors around us. At Medjugorje, the Blessed Mother has even admonished followers to speak about all the "signs." At the least, there is the atmosphere of denouement.

This mood has been stoked by the increasingly extreme gyrations of weather (especially since 1990; for a number of days running now, fifteen states would have been all but uninhabitable without air conditioning); the similar eruptions in culture (in the U. S., men now marry men, and women women); the economy (we are in a "regression" more than a "recession" as we head back to simpler and less "prosperous" frameworks, with deep problems in the very fundamentals of our system, which in effect, with the debt ceiling, just admitted bankruptcy); and the stock market -- a psychological stage-setter but one that will be a minor player if a player at all in the major future events (even as an economic prefigurement, it is to be watched less than the price of gas, the consumer index, and the rate of unemployment; it is a lag indicator). Due to things like abortion a mystical priest once foresaw America not collapsing so much as "melting down like the snows of winter."

At any rate, the point is that we are in an entropic, descending atmosphere which has been anticipated and has arrived gradually. It will continue to be gradual, though accelerated in that progression.

There will be less time between "high-point" events.

Are we really in the era of anti-christ?

It was on June 24, 2011, speaking to throngs at the famous site during its thirtieth anniversary, that Dragicevic said, "Many people ask me if Our Lady has ever talked about the Second Coming of Jesus. No. Has Our Lady talked about the end of the world? No. Our Lady hasn’t come because of that." Again, the essence was that we face major change and events, but not the Final Apocalypse. He even said that "one day when the time comes, when some things get revealed, you will understand why the apparitions are such a long time and why every day. Later on, we will understand some things. Later on, our eyes will be opened. When we see physical changes that are going to happen in the world."

It brought to mind the part of the 1990 prophecy that foresees "the inevitable onset of the change of era" and categorically states (presumably in the words of the Lord, in locution, after a highly unusual dream): "Your era is ending. Soon the world will not be the world you know. I am not speaking of a barren world, or one depopulated, but of the end of your technological era. Many inventions of mankind will be broken down and there will be more of a peasant attitude and way of life everywhere."

In short, the most reputable missives are stating that mankind faces huge and dramatic changes but not The End as so many presume. Both Medjugorje and the alleged 1990 missive speak in term of "chastisements." "These chastisements will differ according to regions, and like the great evil, will not always or usually be immediately noticeable for what they are," claimed the anonymous missive, which seemed to foresee September 11 and other events, such as the weather that, as stated, has erupted in the past two decades. "The world will not end but change."

It was galvanizing because on the one hand such words serve to calibrate those who have taken an apocalyptic approach and on the other hand because they are corrective words for skeptics and secularized Catholics who unfairly relegate any prophecy -- even when it simply speaks of chastisements -- as nonsensical, "end-of-the-world," fundamentalist fare. They can't seem to separate the concepts, though chastisement is a mainstay of the Bible, particularly the Old Testament (where example of it are found in virtually every book). Ivan's comments likewise matched earlier remarks from the most prominent visionary at Medjugorje, Vicka Ivankovic, who in 1997 likewise said none of her secrets involve the Second Coming, anti-christ, or end of the world.

Still, no one knows what's in the assumed prophecies of the remaining four seers (they are not privy to each other's secrets, and thus may have entirely different ones), and while the 1990 prophecy did not express a "second coming" in the sense of the "final" one, it foresaw Christ appearing in a series of apparitions (like Medjugorje, but much more powerful and likewise disbelieved by secularists). The Second Coming and "end" are also mentioned at the Church-approved site of Kibeho in Africa (though for the main part not by the three seers who were officially approved out of seven). 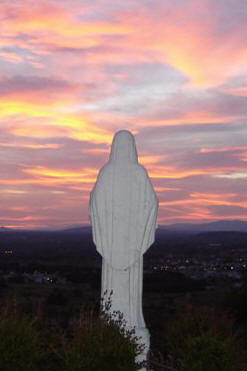 All of it dovetails at a time when we have been exploring the "Georgia Guidestones," where a small anonymous group erected a Stonehenge-like monument that foresees a huge calamity and exhorts those who survive to follow certain New Age-like precepts [see previous story].

This is of concern because the 1990 locution also saw rise of an anti-christ-like figure who after chastisements -- and ensuing chaos, or befuddlement -- would establish, or seek to establish, a new world order. We should note that Mirjana's message also said, "As individuals, my children, you cannot stop the evil that wants to begin to rule in this world and to destroy it. But, according to God’s will, all together, with my Son, you can change everything and heal the world."

Childish? Overly credulous? The Bible says not to despise prophecy (and, thus, decidely, do we not).

"Many inventions of mankind will be broken down and there will be more of a peasant attitude and way of life everywhere. After this breakdown of false society will come persecution of Christians and also a new world order. The anti-christ will be on earth trying to affect the new world order. Hardly anyone will notice the extent of his influence until afterwards. He will not be of tremendous visibility until he is accomplished. That is to say, he will not rule, control, and be at all obvious to the world at the peak of his influence. He will not be unlike a figure such as Marx, except his ideas will be more immediate.

"I will come not as a man of flesh, but like My mother, who already nurses Me and holds Me in her arms, as a light and power. I will manifest Myself in a series of supernatural events similar to the apparitions but much more powerful. In other words, My second coming will be different than My first, and like My first, it will be spectacular to many but also unknown initially to many, or disbelieved. Yet truly I tell you, the arrogance of the world will have been broken, and so many more than normal will believe.

"I will come in towering light.

"My mother held me in her arms at Medjugorje, as an infant.

"I will come as she has come, in light.

"Know this about the world: I would not appear on television, nor ride a car, nor travel in an airplane.

"Would I come in such a manner?"

[resources: The Final Hour,  Prophetic retreat in Denver and in San Diego; also to be announced: a seminar in Los Angeles and a retreat in Boston]

Dt 4:32-40
Moses said to the people:
“Ask now of the days of old, before your time,
ever since God created man upon the earth;
ask from one end of the sky to the other:
Did anything so great ever happen before?
Was it ever heard of?
Did a people ever hear the voice of God
speaking from the midst of fire, as you did, and live?
Or did any god venture to go and take a nation for himself
from the midst of another nation,
by testings, by signs and wonders, by war,
with his strong hand and outstretched arm, and by great terrors,
all of which the LORD, your God,
did for you in Egypt before your very eyes?
All this you were allowed to see
that you might know the LORD is God and there is no other.
Out of the heavens he let you hear his voice to discipline you;
on earth he let you see his great fire,
and you heard him speaking out of the fire.
For love of your fathers he chose their descendants
and personally led you out of Egypt by his great power,
driving out of your way nations greater and mightier than you,
so as to bring you in
and to make their land your heritage, as it is today.
This is why you must now know, and fix in your heart,
that the LORD is God in the heavens above and on earth below,
and that there is no other.
You must keep his statutes and commandments which I enjoin on you today,
that you and your children after you may prosper,
and that you may have long life on the land
which the LORD, your God, is giving you forever.”]