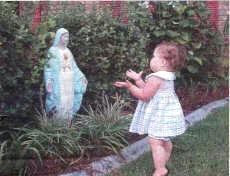 For years the Church has taught the existence of "limbo," a theoretical place where, it was said, children who have not been baptized go.

It has never been a part of actual doctrine -- it is not like the concept of Heaven, purgatory, and hell -- but it has been out there as a matter of widespread belief. Now, the Vatican is mulling it over. Is there really such a thing? Or was limbo the contrivance of theologians?

According to the 1904 catechism published by Pope St. Pius X in 1904, "children who died without baptism go to the limbo where they do not enjoy God but don't suffer either as having the original sin, and only that, they do not deserve Paradise nor Hell or Purgatory." Indeed, it was taught that not baptizing a child deprived that child of eternity.

But the Church has long stopped referring to limbo, and in 1984 theologian Joseph Ratzinger, who would later become prefect for the Sacred Congregation for the Doctrine of the Faith -- and then Pope -- said that limbo "was never a truth of the faith."

Now that Pope is overseeing an advisory board of theologians who are revisiting the idea and thus far have come to the conclusion that it makes more sense to hope unbaptized babies go to Heaven than to any place that is in-between.

The Vatican theologians met October 2-6 to continue work on a statement explaining why the concept of limbo entered the common teaching of the Church.

"We cannot say we know with certainty what will happen" to unbaptized babies, said Father Paul McPartlan, a member of the commission and a professor at the Catholic University of America in Washington, "but we have good grounds to hope that God in his mercy and love looks after these children and brings them to salvation."

The Pope has not yet ruled on it. But his feelings were expressed in one book in which he remarked, "I would let it drop as this has always only been a theological hypothesis."

We of course do not have the answer.

But how theologians ascertain the truth of eternity is an interesting question, and so is this: have those who claim near-death experiences -- who have actually seen what occurs, and have described such places as Heaven and hell -- also described a situation that could be taken as limbo?

Millions assert they have had brushes with death during which they glimpsed the hereafter. Among these have been unbaptized children whose otherworldly memories in some cases allegedly go back to infancy. For the most part they describe what appears to be the same paradise as adults who "die" and return.

"Even at very early ages -- as early as six months -- children report the same symptoms in their near-death experiences as do adults  from all cultures: the sensation of seeing one's own body from a vantage point outside the physical body, panoramic life review, entering a tunnel, meeting others, including living and dead relatives, encountering a being of light, sensing the presence of a deity, and returning to one's body," wrote a physician and expert on near-death named Dr. Raymond Moody of Virginia.

According to books by doctors who have studied the issue, a surprising number of children feel as if they were suddenly adults when they are on the other side of the veil, with those heavenly depictions.

"I looked around the garden and saw this being," recalled one youngster. "The garden was extraordinarily beautiful, but everything paled in His Presence. I felt completely loved and completely nourished by His Presence. It was the most delightful feeling I've ever known."

Those who "die" as youngsters and come back appear "happier and more hopeful than those around them," observed Dr. Moody -- who has been controversial in his own right: While near-death experiences appear to be consistent, many are those who are concerned with what in some cases seem like New Age aspects. Others argue that it is a trick of the subconscious or due to a lack of oxygen to the brain during accidents or illness.

But an increasing number of physicians are accepting them and the Church has been recording such accounts since the time of Gregory the Great (and even before that, in the quote from Paul about a man he knew who had been taken up into the "third Heaven"). Should such testimonies now be considered by the committee on limbo?

A doctor named David B. Hezog reported the case of a boy named Mark who was nine months old when cardiac arrest put him in a coma that lasted three months. Despite his age, he was later to recall that during that time the same brightness that adults describe as part of Heaven upon clinical death.

Meantime, Dr. Kenneth Ring, a psychologist at the University of Connecticut, cites the case of a six-month-old girl who suffered renal and circulatory failure and had a memory of "peace and contentment." Said one nine-year-old who "died" and came back: "A pretty lady came up and helped me because she knew I was scared. We went through a tunnel and went into Heaven. There are beautiful flowers there. I was with God and Jesus."

Even the youngest have described Heaven -- not a gray area, not an in-between spot, not a place outside the Presence of God (which is how one might conceive of limbo) -- but paradise with the Lord. Can we believe them?

"Very often these children form attachments to the people they met on 'the other side,'" he wrote. "When they come back, they talk about the beautiful woman who took care of them when they died."

Experts are even logging what they claim are "perinatal" memories. Perinatal means "at or around the time of birth -- and should give abortionists great pause. There is even an Association for Pre- and Perinatal Psychology. Hundreds of physicians and nurses, academics and scholars, and therapists and educators from around the world make up its ranks.

And they have cases that include those who have remembered memories of dying at birth. Or so they claim.

In such recollections are no recollections of a place for only infants, and in none is there mention of a limbo. But near-death episodes have included experiences of purgatory, where souls not ready for Heaven are cleansed.

[As the Catechism of the Catholic Church explains: "Born with a fallen human nature and tainted by original sin, children also have need of the new birth in baptism to be freed from the power of darkness and brought into the realm of the freedom of the children of God, to which all men are called." But the catechism, published in 1992, did not mention limbo. In fact, regarding the fate of children who die without the grace of baptism, it said, the church entrusts them to the mercy of God -- Catholic News Service]