NOTES FROM APPARITION FRONT: THE PROS AND CONS OF MAJOR AND MINOR SITES ALIKE 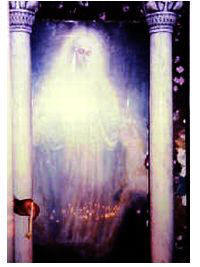 It is better to believe than not believe. Take from an alleged private revelation what is good, and leave the rest. All prophecy is imperfect.

We try and adhere to that. There are those who feel we should not link to articles with negative pronouncements about apparitions, and those on the other side who think we are not doing it enough. We attempt to be fair while giving private revelation -- so often brushed aside in modern society -- the benefit of the doubt.

One apparition in the news of late has been Medjugorje. First came news that vandals had defaced a famous statue of Mary at the site of the first apparitions, then a wildfire threatened it (veering off at the last moment). Meanwhile, two English newspapers ran negative articles (both of which we linked to), one tabloid reporting that a priest involved in Medjugorje had been severely disciplined by the Vatican (and describing the apparition site as "illicit" in its headline), the second article reporting that the Pope is about to crack down on apparitions.

There was some truth in both reports. The Vatican (last winter) did release a final disciplinary action against a Franciscan who had been at Medjugorje and advised the seers. What the article failed to mention was that the priest arrived at Medjugorje more than a year after the apparitions began (assigned there by the Bishop of Mostar, who later moved to have him disciplined) and left in 1984, nearly a quarter of a century ago. Moreover, Medjugorje never has been declared "illicit." The matter is currently out of the bishop's hands and under active Vatican consideration.

The second article -- on the "crackdown" -- failed to explain that what the Vatican was doing was simply distributing long-overdue guidelines for bishops so they can follow uniform procedures in evaluating apparitions -- something we welcome and was first announced under John Paul II, who supported the apparitions. The article said the Vatican was "skeptical" toward Medjugorje, but quoted no official in Rome as using that word. The more accurate adjective at this point would be "neutral," and such reportage would not have passed muster at the vast majority of American newspapers.  It also inaccurately stated that pilgrimages to Medjugorje were prohibited (the Vatican asks only that until there is a final decision, there be no official parish trips).

Oh, England! Always England. But on to South America: In Ecuador is an alleged visionary named Patricia ("Pachi") Talbot whose apparitions also have not yet been formally ruled upon. But some intriguing aspects here: a neurologist, Dr. Ramon M. Sanchez, has sent us a book, In His Living Presence, in which he documents tests on Pachi and two other subjects -- one a seminarian, one another reputed seer -- which seemed to indicate "unprecedented brain-wave patterns during prayer or apparitions.

"During prayer and meditation, Patricia remained awake and alert with eyes open, and developed normal beta rhythms seen in the 18-20 Hz range bilaterally," the doctor writes. "After a holy Mass celebration, the local parish priest brought the consecrated Eucharistic Host to Patricia's home.

That number -- 333 -- also showed up in the other two subjects at poignant mystical moments, reports the doctor, who now hails from the Atlanta area, and has been featured on CNN as well as 60 Minutes.

How to discern? Everyone struggles with that -- not only with alleged mysticism but in everyday decisions. In the end, it comes only deep in prayer, and especially with fasting.

"The Virgin image on the tree is demonic," complained Christine Charlton of one miraculous assertion. "It has the face of a demon, a hideous face of an old man and this demon is holding a satanic cat. There also seems to be another demon nearby the cat. I have the gift of discernment. I have received this gift because of many years of interceding for the souls in purgatory and for people who are in need of prayers. These fallen angels enjoy the attention  they are getting and they are fooling people. This image is not from Our Lord nor from the Blessed Mother."

Controversies rage (especially in the U.S.).

As for apparitions, few things are as emotional, which is perhaps why -- when asked, once, if there were false seers -- the Venezuelan mystic Maria Esperanza (who strongly believed in Medjugorje) put her fingers to her lips when asked about false ones.

Perhaps she urged silence because we are not to judge, or because it does no good to diminish a person's faith by besmirching an apparition. We don't believe in carrying anything negative about seers unless there have been official statements. In that case, we are obligated to report any and all such judgments (unless the Vatican has removed a bishop's authority).

It is a time for caution, and Church obedience -- whatever it decides. Viewers have weighed in. "I personally have had visions and verbal messages, none that I will discuss, because they are personal and I feel for my benefit only," noted one, Jim Durka, from the University of Michigan. "I have had some that clearly were deception at its best. Just a suggestion, but maybe an article explaining the differences between true apparitions and those of the demonic. Even Satan quoted Scripture and according to some great saints had assumed the image of a guardian angel or other seemingly holy image. It may help those who have not had a deep understanding of the Faith or proper teaching."

"From First John 4:1-3: 'It is not every spirit, my dear people, that you can trust; test them, to see if they come from God. There are many false prophets, now, in the world.  You can tell the spirits that come from God by this: every spirit which acknowledges that Jesus the Christ has come in the flesh is from God; but any spirit which will not say this of Jesus is not from God, but is the spirit of Antichrist' (Catholic Jerusalem Bible 1966).

There are so many disputes.

Virtually all claims of apparitions are controversial.

Most are even more controversial than Medjugorje. One person writes that an Ohio seer can be believed because this seer quoted Christ as saying, "I am your Jesus, born incarnate" while another cannot because she says that Jesus is "all spirit."

You get the idea.

Discernment is tricky. Guidelines from Rome (although not via the London press) are welcome.

Better to believe than not to believe -- but dangerous to become overly attached to any apparition. Still, it may be the dark side that makes folks obsessed with besmirching certain situations. On either side, the devil seeks to divert.

Sometimes, maybe it's best to keep with those who are not formal seers (but seem in touch with the supernatural, as is now happening so frequently).

"It's weird," Hamilton recently recalled. "Well not weird, but I had this dream back before I got back into baseball, three or four months before I was reinstated, that I was at a Home Run Derby and it just happened to be at Yankee Stadium. I don't see myself hitting, but I see a lady sticking a microphone in my face, and everybody in the stadium got to hear why I was at the Home Run Derby and that's because Christ is in my life."

He is back in baseball and appeared last summer in the All-Star Game at Yankee Stadium (home of course of Mickey Mantle and Babe Ruth and Roger Maris).

[resources: Visions of the Children, The Hidden Child of Medjugorje, Discerning Private Revelations: Discerning with the Church, and Medjugorje and the Church]

[And: English paper claims Vatican will crack down on alleged apparitions and Crackdown -- or more distortion?

[The exact Church pronouncements on Medjugorje can be seen here in an article by a theologian who intriguingly added that when he sat down for a discussion with the famed Mother Teresa of Calcutta, she was near a Medjugorje calendar. "I pointed up to the calendar and asked her, 'Mother, do you believe in Medjugorje?' writes the theologian and Mariologist. "She responded by putting her finger up to her lips as if to gesture 'shhh or let us speak quietly of this, and answered, 'I asked Our Lady of Medjugorje to come to my first home for the dying in Calcutta, and she did!' I did not have the courage to further question the future saint, 'How did she come, Mother? – in the form of an apparition, a healing?' She simply left the subject with a serene smile on her face." [see article].

As for the "new" guidelines, notes Marian blogger Bernard Gallagher from the UK: "According to an Italian website, Pope Benedict has asked the new Secretary of the Congregation for the Doctrine of Faith (CDF) – Spanish Jesuit Luis Ladaria Francisco Ferrer – to prepare a guide to be used by bishops from around the world, summarizing the criteria and procedures to be followed for the recognition of apparitions Marian and manifestations.

"The guide will outline the basic criteria that every bishop is required to follow for the recognition of Marian apparitions: collection of accurate information on facts; examining the message and verification that it is not contrary to the faith; medical diagnosis and psychological analysis of seer and their theological education and spiritual journey and study of possible miraculous healings linked to appearances. If necessary the local bishop can call on assistance and advice of CDF.

"After this process the bishop may issue one of three different types of judgment: positive, negative or one that cannot certify either.

"This criteria reflects the rules approved by the Congregation for the Doctrine of faith in 1978, so far never published, and that the handbook will further explain and integrate."

Meet the family: The ' redneck', his pregnant teenage lover and the man who wants to be president