While we often hear of Masses for the dead, to help with the afterlife, a Mass for the living has extraordinary effects while we are alive. It's time to realize that.

Some believe it is even more profitable for us to acquire the benefit of such Masses during life than after our deaths! 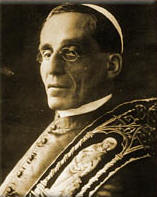 Pope Benedict XV, who lived a hundred years ago [left], once wrote:  "Why do not the faithful, who wish to secure a rich and holy death, have Holy Mass celebrated for that intention?

"Applied to the living, the fruits of the Holy Sacrifice are much more copious than when applied to the dead.

To me it is that simple and the lesson is: pray for the living now. Pray for their eternity. You will help them -- and yourselves.

The priest is the representative of the Church. He acts in her name, and if he celebrates Mass for a member of the Church, the fruit of that liturgy is infallibly applied by God to that person. The belief is that God obeys the voice of the minister of His Church.

With the dead it is different. Once the soul dies and is in the hands of the living God, that soul must now deal solely with Him. God is not obligated to the Church with regard to the deceased. He has not bound Himself with a promise by which He must necessarily take account of the Church's Will with regard to the souls of the dead.

But while we are here in the struggle of earth there are special graces, and many can come from a Mass for the Living.

If we offer Masses regularly for ourselves, loved ones, and friends during life, this translates into the source of actual graces.

The grace of urging a soul to repentance or a more fervent prayer life is one prayer to say. Graces of preservation against the evil one and the dangers of our world is another (especially in these times).

Asking for "choice" graces that would cause a soul to believe in the love of God (and neighbor) is a particularly potent prayer.

The way is open for us to make progress in virtue, to acquire new merit, and to augment our degree of glory in Heaven -- all by having Masses offered while we are still alive!

We have in the Mass, then, a real means of assuring for ourselves a good and holy death -- if we place no voluntary obstacle in the way!

Do not postpone Masses until after your death! Divine Justice is less exacting before than after. Have a Mass offered from time to time -- for the special intention of your sanctification and perseverance in grace. And tend to loved ones.

In doing so is a means of surrounding ourselves in eternity with many grateful friends whose gratitude will augment our glory in Paradise.

The old maxim "charity begins at home" is a wise and commendable one when it comes to the hereafter, and if we act on it, we insure ourselves -- and those loved ones -- a more prompt release from purgatory.

So when a birthday, anniversary, or holiday comes along, ask for a Holy Mass or perpetual enrollment to be offered for you, and do the same for others.

It may be done now, in the dark of this earth, but it will follow you to Heaven!