THAT DIRECTIVE ON APPARITION SITE: A CAUTIONARY NOTE OR AN INDICATION OF WHAT IS AFOOT AT THE VATICAN?

The news that the papal nuncio, Carlo Maria Viganò, had sent a letter to the U.S. bishops saying that because the apparition site of Medjugorje has not yet been discerned by a commission investigating it, neither the faithful nor clerics should participate in events during which such apparitions are presented as authentic, sent "shockwaves" through segments of Catholicism. As always, the letter, initially reported here, is now subject to the kinesis of "spin" (depending on blog proclivities).

But the action, which amounts to the reining-in of one seer (Ivan Dragičević), was basically a cautionary reminder, citing a 1991 finding by a national committee of Yugoslavian bishops -- widely known, and quoted often (here and elsewhere) -- that apparitions at the site could not as of 1991 be determined in a definitive way as "supernatural."

That has been followed, since 1991, by two different official statements from the Vatican press office stating clearly that while formal diocesan or parish pilgrimages are not allowed (it is why we often deploy the term "alleged"), priests and faithful were allowed to go to Medjugorje on unofficial pilgrimages.

Below, as last week (11/6/13), is the directive, but also, before that, the opening letter from the bishops' associate general secretary, Monsignor J. Brian Bransfield, that accompanied and described it as "important pastoral information." If the nuncio's directive, dated October 21, 2013, and sent to the general secretary for U.S. bishops (meeting this week in Baltimore), was surprising in one regard -- coming as it did from the Pope's ambassador to the U.S. -- perhaps more surprising, in light of the 1991 finding, and certain quarters of vehement opposition to the apparitions, is that such a directive had not been issued earlier: the seer's apparitions have taken place for nearly two decades in formal church settings, often with a Mass.

Also surprising was that it was issued at the behest of Archbishop Gerhard Ludwig Müller, who is prefect of the Congregation for the Doctrine of the Faith (which oversees reputed private revelations).

It was the most direct action from the Congregation -- and thus the Vatican -- since April of 1986, when it stopped a local bishop, Pavao Žanić, from condemning the apparitions. Even that, however, was not as direct in the public sense as what has now occurred.

If issuing a cautionary note, in and of itself, was not astounding, the tone of the letter ("so-called visionaries" and an emphasis on "apparitions" with quotes around that word) seemed at the least skeptical. How familiar the nuncio is with the apparitions is unclear (the name "Medjugorje" was misspelled twice in the letter).

Questions remain. Does the directive also apply to the other five seers at events in other countries, including Medjugorje itself? Does it imply any tendency by the investigating commission toward a negative conclusion? In singling out a seer, might it also signal possible future actions whereby (as at Kibeho in Rwanda) some seers are approved and others are not? Or more fundamentally, is the Vatican setting the stage for a declaration of Medjugorje as a "National Shrine" (which is how Rome referred to it when inviting representatives to a recent Marian Day) while distancing it from the seers and their apparitions? (The Vatican has long repeated the need for pastoral care at the site, which has been visited by tens of millions, including thousands of priests and hundreds of cardinals and bishops, and has spawned numerous vocations in the U.S., Canada, and Europe, as well as countless conversions). At this point, it does not seem to pertain to Medjugorje itself and other countries, since the letter was from the U.S. nunciature, which extrapolated from Müller ("it follows, therefore").

The most fundamental question: how does Pope Francis feel about it? Is he aware of the nuncio's action, at the request of Archbishop Müller?

Probably not. At this point, no one knows. The Pope, in informal remarks during Mass at St. Marta's House, warned months back of too much orientation to the "unusual." He emphasizes the Gospel message. Moreover, he has emphasized the need for Church "poverty." But he's known as quite Marian, reportedly allowed Ivan to appear in his archdiocese back in Argentina (we continue to look for a confirmation of that), and certainly believes in miracles associated, for example, with places like Fatima and statues such as that at Aparecida (which he paid a special visit to during his trip to Brazil). It might also be noted that he did not appoint Archbishop Müller. The prefect, who is from Germany, was an appointee of Benedict XVI who again -- on the one hand -- had played a role in preventing condemnation, while -- on the other -- was not as openly supportive as his predecessor, John Paul II.

Some way, in the end, and no matter the commission's findings (if they are released), good will come from it all; the final question is how many commissions, in the end, will have discerned the events; in some cases, one commission has rejected an apparition that was later accepted by a second commission or bishop. Any discernment by a commission could be over-ridden one way or the other by a remark, even an off-handed one, by the Pope. But a discernment by the current commission is likely to stand, if made public, whenever and if ever it comes, and must be strictly obeyed. The Vatican Commission follows the original committee set up in the 1980s by the local bishop of Mostar, the decision of which was rejected by the Vatican, which was followed by a national commission of Yugoslavian bishops, who made the 1991 "non-decision" statement before war in the Balkans interrupted, which was followed after the break-up of Yugoslavia by a new commission formed by several bishops and a cardinal in Bosnia-Hercegovina, which was disbanded several years ago when the current commission was formed in Rome, making it the fourth. 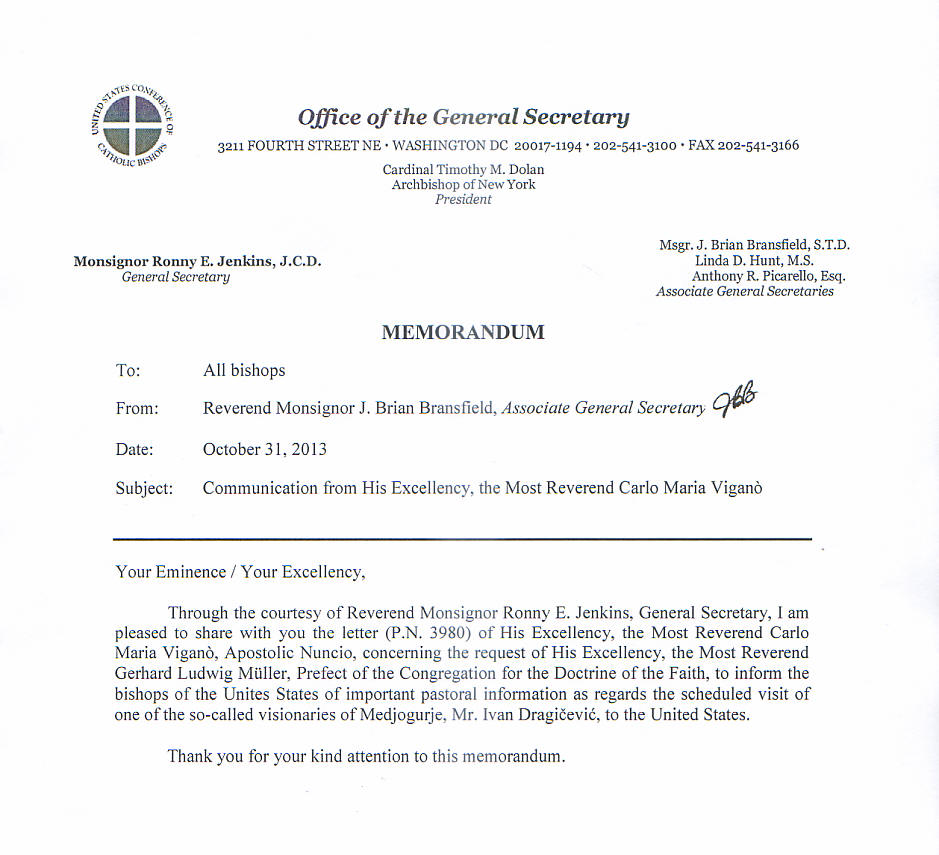 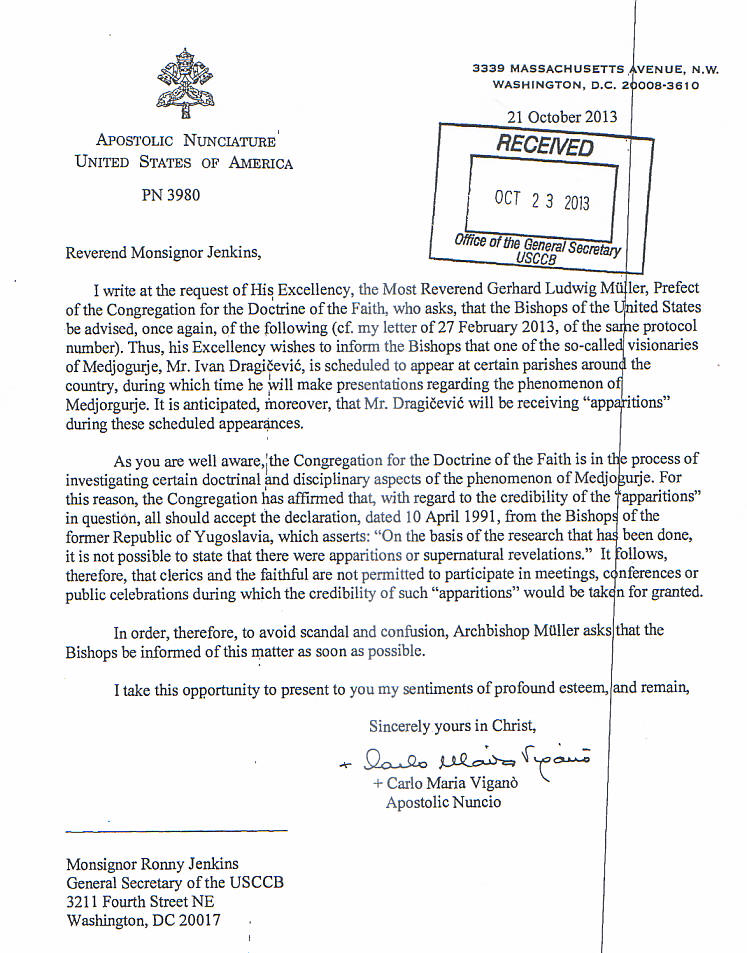 [Feedback, from Father Joseph Mary Elder, Capuchin fathers, province of St. Conrad: " It seems to me that the interpretation of that statement is much stricter than the statement itself. Could not the problem be solved by merely stating at the beginning and end of a public gathering that these alleged apparitions are currently under the study of a Vatican commission and their authenticity is not to be assumed?"