IN TOPSY-TURVY WORLD OF APPARITIONS, TWO EXORCISTS ALLEGEDLY FACE OFF 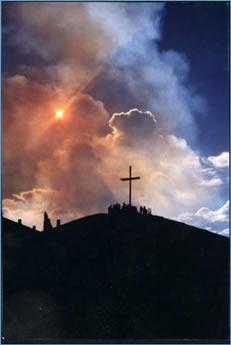 As we shove off for a pilgrimage to Medjugorje, we ask for prayers and acknowledge, as always, that, in the end, we will always adhere to the rulings of the Church.

Thus far, there has been no ruling. The most recent news has been the announcement that a final discernment is not in "regional competence" unless Rome specifically directs such, which in effect has taken the matter away from a national team of local bishops who appeared negative. The same was done twenty years ago, that time with the local bishop in Mostar.

In the topsy-turvy world of mysticism is constant controversy. Most recently, two exorcists have faced off: one -- at least according to a London tabloid -- saying Medjugorje is the "work of the devil," while another, Rome exorcist Father Gabriele Amorth, who has visited there, calling it a great weapon against the devil.

The London report was in the Daily Mail, which started with the words, "The Vatican has denounced a group who claim to have seen the Virgin Mary more than 40,000 times in the past 27 years."

It quoted Andrea Gemma, a bishop and once a "Vatican exorcist," as telling a magazine in Italy that "This whole sham is the work of the devil. It is a scandal." He reportedly said the Vatican "would soon crack down on the group." Many criticize the commercialization of Medjugorje, where shops are now built up in the same way as Fatima and Lourdes.

That report (you can view the tabloid here, viewer discretion advised) flies in the face of statements by famed Rome exorcist Father Amorth, who during his stay at Medjugorje in July 2002 gave an interview to a priest in which he said that "Medjugorje is a fortress against Satan. Satan hates Medjugorje because it is a place of conversion, of prayer, of transformation of life.

"I always understood Medjugorje as a continuation of Fatima. According to Our Lady’s words in Fatima, if we had prayed and fasted, there would not have been World War II. We have not listened to her and therefore there was a war. Also here in Medjugorje, Our Lady often calls to prayer for peace."

He added that "Medjugorje is really a place where one learns to pray, but also to sacrifice oneself, where people are converted and change their lives. The influence of Medjugorje is worldwide. It is enough to think about how many prayer groups came about thanks to the inspiration of Medjugorje. I also lead a prayer group, which was founded in 1984. This group is already 18 years old. We live one afternoon as it is lived in Medjugorje. There are always 700 or 750 people. We always meditate on Our Lady’s message of the 25th of the month and I always read this message in relation to a sentence from the Gospel, because Our Lady does not say anything new. She invites us to do what Jesus thought us to do. Groups like mine exist all over the world."

So we see an apparent divergence of opinion -- even among prominent exorcists, if the quotes from Bishop Gemma (thus far unconfirmed) are accurate.

The problem is that they are in a sensationalist English newspaper that focuses on celebrities with salacious photographs in a way mindful of supermarket tabloids in America.

Does he have inside knowledge? Will the Vatican soon rule against Medjugorje?

No one knows. John Paul II favored Medjugorje. No one knows exactly where Pope Benedict stands.

The only certainty is that controversy -- and confusion -- will continue until Rome, which now has full control, actually rules on the matter, at which time we will not only report it in full but strictly adhere to it.

[resources: Medjugorje and the Church]