Chosen To Heal, by Laura Wright, the stories of gifted Catholics -- a priest who lays on hands, a woman in Virginia, a simple Texas man, a former gangster, a priest who had a near-death experience -- who have healing ministries and have seen many miracles: how it happened to them, what has happened, the miracles, the way they reportedly heal, and the way their accounts help heal this broken world! click here 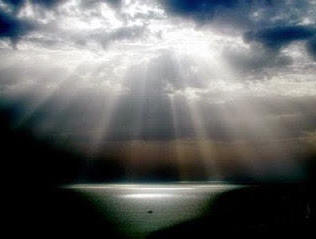 When we left off we were discussing the mystic Mother Eugenia Elisabetta Ravasio and the incredible endorsement she received from a bishop, Reverend Alexandre Caillot, of Grenoble, France, after a ten-year investigation.

You can view the previous article here.

Now to her main message -- which she claimed came God Himself:

That a special feast day be set aside in His Remembrance, as well as a picture of Him, holding the globe.

Her message book was entitled "The Father Speaks To His Children" and we'll say this from the onset: whatever the legitimacy of the intricacies of her messages, for years now we ourselves have felt compelled to promote greater devotion to the Heavenly Father.

Our God. Our Creator.

How many churches are named for Him?

When we do we set aside a special time to think solely about the One Who made us?

Now, maybe that He doesn't need a church named after Him -- maybe this puts Him on the standing of saints, where obviously He is vastly beyond that -- but how often do we pray to Him directly?

Simply put: no matter how devout we are, how much do we forget Him?

As Bishop Caillot, in his formal approval of Mother Eugenia put it, "The object of the mission which would appear to have been entrusted to Mother Eugenia is precise and, from a doctrinal point of view, I see it as legitimate and timely.

"Its precise object is to make God the Father known and honored, mainly by the institution of a special feast which has been requested of the Church.

"The inquiry established that a liturgical feast in honor of the Father would be quite in keeping with Catholic practice as a whole. It would accord with the traditional thrust of Catholic prayer, which ascends to the Father, through the Son, in the Spirit, as shown by the prayers of the Mass and the liturgical oblation to the Father during the Holy Sacrifice.

"However, it is strange" that there is no special feast in honor of the Father. The Trinity is honored as such, the Word and the Holy Spirit are honored by their mission and external manifestations.

"Only the Father has no feast of His own which would draw the attention of the Christian people to His Person. This is the reason why a fairly extensive survey of the faithful has shown that, in the various social classes and even among many priests and religious, 'the Father is unknown, no one prays to Him, no one thinks of Him.' The survey reveals, rather surprisingly, that a large number of Christians remain distant from the Father because they see Him as a terrifying judge. They prefer to turn to Christ's humanity. And how many ask Jesus to protect them from the Father's anger!

"A special feast would thus have the effect of re-establishing order in the spirituality of many Christians and, secondly, of leading them back to the Divine Son's instruction."

Perhaps this is the single best and last chance to mitigate chastisement: going to the Father.

He has final say.

He has ultimate love.

No one loves more!

"At a time when the world is troubled by secular doctrines, atheism, and modern philosophies, and no longer recognizes God, the true God," wrote the bishop, "would not this feast make known to many the living Father, the Father of mercy and goodness, Whom Jesus has revealed to us?"

Mother Eugenia herself said He told her, "I am coming to banish the excessive fear that My creatures have of Me, and to show them that My joy lies in being known and loved by My children.

"I am coming to bring hope to men and nations.

"The world has often been purified of its corruption because of My infinite goodness toward humanity.

"These means will help them to purify themselves from their sins, so that they may still be the children of My Love.

"They are chiefly, the seven sacraments.

"My dear children, I have lavished these gifts upon you with special graces for twenty centuries, but with what miserable results!

"How many of My creatures, who become children of My Love through My Son, have quickly thrown themselves into the eternal abyss!"

Here we see a striking similarity to messages from apparitons and near-death episodes, to the effect that we choose Heaven or hell.

Hell is the complete absence of the direct Presence.

"Do not think of Me as that frightening old man whom men depict in their pictures and books! No, no, I am neither younger nor older than My Son and My Holy Spirit. Because of this I would like everybody, from the youngest to the oldest, to call Me by the familiar name of Father and Friend.

"I also desire that every family prominently display the picture I will later show to My 'little daughter.'"

Allegedly, some of the messages were intended directly for the Pope.

"If only you knew how much I desire to be known, loved, and honored by men with special devotion!" was part of it. "I have had this desire for all eternity and since creation of the first man. I have expressed this desire to men at various times, especially in the Old Testament.

"But man never understood it. Now this desire makes Me forget all the past, if only it can become a reality now, in My creatures all over the world.

"I desire the one day, or at least a Sunday, be dedicated to honoring Me in a special way under the title of Father of All Mankind.

"For this feast, I would like a special Mass and Office. It is not difficult to find the texts in the Holy Scriptures. If you prefer to offer Me this special devotion on a Sunday, I choose the first Sunday of August. If you prefer a weekday, I would like it to be always the seventh day of that same month.

"I desire that all th clergy should undertake to promote this devotion and, most of all, to make Me known to men as I am and as I will always be for them, that is to say, the most tender and loving of all fathers.

"I desire them to bring Me into all families, hospitals, laboratories, workshops, barracks, conference halls of the ministers of nations -- in short, wherever My creatures are, even if there were only one of them!"

Does it seem odd, God making such requests?

Or is it in line with many times in the Holy Scriptures when He made simiular requests -- such as building the Ark of the Covenant and then the Temple to house it in His honor?

Whatever we think of the actual revelation, have we not felt this ourselves? Do we not neglect Him?

The time has come.

Bring God the Father to the fore.

There may be expiation. There may be purification -- here and in purgatory. But acknowledging Him is salvation itself.

"For everything that you do for My glory, I will do twice as much for your salvation and sanctification," He supposedly told Mother Eugenia, who was born in Italy, and established missions of mercy around the world -- miraculously.

"All those who call Me by the Name of Father, even if only once, will not perish, but will be sure of their eternal life among the chosen ones," He said.

[resources: a pamphlet of her messages can be obtained through the website, Mary's Call]