The phenomena of mountains 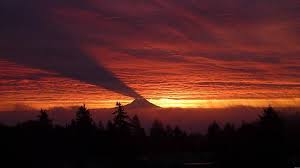 Blood moons. Super-moons. Many prophesy by words, but one is led as much -- or more -- to signs in nature right here on earth (and under it).

Obviously, there's a spiritual component to mountains. To know that we have only to think of names like Sinai, Tabor, and Zion. For arcane reasons, the "veil" (as well as the air) seems to thin with altitude. The Mount of Olives. The Blessed Mother has often appeared on hills (see: Tepeyac at Guadalupe, or the rise at Fatima) and in some cases, like that of LaSalette, or in the Andes, actual mountains.

There are also mountains that seem host to darker elements. Here one might cite volcanic eruptions [see here] with strange formations within the smoke, or Mount Diablo near Sacramento (if nothing else, the implications in its name) and Mount Shasta, also in California and popular with New Age revelers. Could it be that spiritual forces good and evil employ the energy at such places, like power spots?

In the Himalayas, and places like China, mountains are all but revered as gods unto themselves, and those who desecrate them risk the wrath of sherpas.

Perhaps into the mix one can insert Mount Rainier in the state of Washington.

Last week (9/21/15) a story came over the "wires" replete with pictures of strange silhouette-like images in a circular rainbow above the mountain. It turns out that this occurs on occasion and is something hikers seek to witness and photograph -- an amazing "natural" phenomenon of reflection or refraction (say meteorologists, who often have ready explanations).

"Two hikers witnessed a rare occurrence while climbing a mountain in Mount Rainier National Park: their own optical illusion," noted ABC News. "Radka Chapin and her husband Chris were standing on the summit ridge of Washington's Tamanos Mountain on Saturday when they got to see an effect known as a 'Brocken Spectre'" [left]. 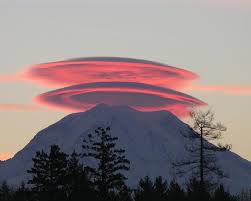 So it wasn't anything eerie? Just a reflection, or refraction, or mirage.

But Rainier certainly has a history: it's where the first famous "UFOs" were spotted (by a pilot named Kenneth Arnold, who dubbed them "flying saucers" in 1947) and UFOs bring to mind the "spiritual lights" of which old-time Indians spoke. We have long argued that when they are a legitimate phenomenon, UFOs may be a spiritual manifestation, and not a good one.

Other explanations? "It's amazing what some sinking air can do at the right time in the right place," said one commentator about the picture to the left.

Many strange reflections and clouds, in our times -- natural, of course.

But in the totality of natural "phenomena," what is adduced? Do they speak of an overall force we don't yet comprehend? The photographs above left are of reddish clouds precisely above Mount Rainier. (While strange and saucer-like, they are not the ones Arnold saw; he saw small "objects" that whizzed off.)

Makes, if naught else, for interesting rumination.

Rainier is considered one of the world's most dangerous volcanoes, though there are no signs of imminent eruption. Tahoma, Indians called it ("the mountain that was God"). "It is so 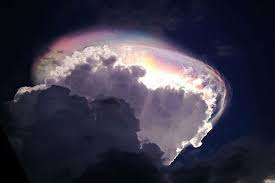 real this mountain, yet so unreal, that one may never altogether know it, for there is an indescribable ghostliness about it, that suggests a living double personality..." -- The Saga of a Mountain, Tacoma Eastern Railroad pamphlet (1911).

For this quote we thanks H. D. S. Haldane.