There are the mysteries of politics. Call it synchronicity.

He certainly doesn't coordinate them all. There is free will. And we are in a society based on just such freedom. The Lord does not tell folks to run nor how to vote (unless they ask) nor how to act in office, if they are elected.

But it does seem like coincidence sometimes bears a suspicious weave. 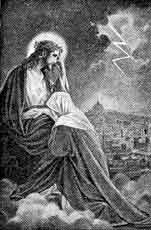 Last summer, for example, it was Rudy Giuliani. There on a stage in New Hampshire (during a debate of prospective Republican presidential nominees at a small Catholic college), the former New York mayor and Catholic-born candidate was asked about his ardently pro-choice stand on abortion (in the light of remarks by a Rhode Island bishop who compared him to Pontius Pilate).

As Giuliani started to respond -- brushing aside the bishop's rebuke -- a strike of lightning crackled through the sound system and cut off his microphone. At that very instant.

There was immediate and startled reaction. The former mayor tried to make light of it. He was soundless. A moment later, there was a second bolt as Giuliani opened his mouth again to answer the question, and then two more [see here] -- shaking up the audience and the secular media.

Was it the Lord?

In the Bible, God hurled bolts of lightning. It was a mark of power. It was a mark of chastisement. In this case it caused a sensation -- was a little exclamation point, noted even by moderator Wolf Blitzer -- and marked the beginning of the end of Giuliani's candidacy.

From strong front-runner, the former mayor fell to the status of a minor also-ran -- struggling in most primaries to reach third place.

Of course, we must be careful not to be too hard on politicians, nor to judge them as people. That's for God. What they need from us is prayers.

We think of how every president born on a year ending in zero since 1840 has died in office (with Ronald Reagan finally breaking the "curse"). There were spooky parallels between Lincoln and Kennedy.

That may be superstition, but is there anything in a name?

There is the coincidence of Barack Obama. Here he is as the new front runner in a nation that was attacked by terrorists led by Osama Bin Laden (who's first name rings such a similar bell) and whose middle name is Hussein (the surname, of course, of the fallen Iraqi dictator)! Barack Hussein Obama.

Strange it is -- without judging anything on the basis of happenstance. It is simply curious.

Known as a man of very strong words and actions against his political rivals (he often used curse words to humiliate them) -- and unmerciful against those he prosecuted (including a prostitution ring) -- he now finds himself in a scandal involving prostitutes while those same political enemies he tormented watch his demise without mercy and were able even to threaten him with impeachment.

No one should rejoice in the pain of someone else. It is no time for schadenfreude. And, again, it is not to judge. Let him who is without sin throw the first stone.

But it is to look at the "coincidences":

Spitzer, who is even more ardently pro-abortion than Giuliani, Obama, or Clinton, had two meetings planned last Monday when the news of his scandal first broke: One was with pro-choicers to discuss a bill in the New York legislature that would repeal any pro-life limits on abortion and make legal abortions the law of the state -- a formal right. More remarkably, he also had a meeting set that same day with New York bishops -- who planned to lobby against that same legislation.

The New York State Catholic Conference was arguing that state regulators could use the proposed and “radical” law to coerce Catholic hospitals to provide abortions.

The meeting had been scheduled for three p.m. (the hour of Divine Mercy).

Both meetings, of course, had to be cancelled, as the governor held a news conference to admit a link to call girls!

A strange dove-tailing of events made all the more interesting by the fact that last month, a conservative group made Governor Spitzer one of its "prayer team targets" precisely because of abortion. There was a coordinated prayer campaign against him.

"More than any governor, Spitzer has tried to destroy the man-woman marriage definition and to license homosexual 'marriages,'" complained Randy Thomasson, president of the California-based Campaign for Children and Families, on Monday -- as the news was breaking. "As Attorney General, he harassed pro-life crisis pregnancy centers."

But lightning struck again. Less than a month after the prayers, Spitzer was gone, falling like lightning.

If God is behind such, you might ask, what about the other strong pro-choicers -- Hillary and Obama?

For that, we have no answer. What about war? Is that not also a pro-life cause? And the environment? How do we have a full perspective?

Of course, again, only God has that.

It is impossible to figure out the way Heaven works.

We know only that the Family Research Council warned on February 28 that Spitzer was preparing for the possible reversal of Roe versus Wade by pushing for a state law that would declare abortion to be a "fundamental right" for women. After a fall even steeper than Giuliani's, he will no longer be leading the way.