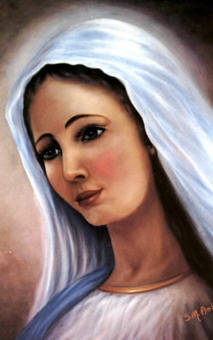 Many are familiar with the picture to the left, but don't know the story behind it. It relates to the mystical experience of a nun at the famous (and for some controversial) site of Medjugorje in Bosnia-Hercegovina. Millions claim to have seen phenomena there, not just with the sun but with actual visions or even apparitions, as was the case with Sister M. Ambrosine, A.C.C., a Precious Blood sister in the Midwest, who painted this portrait we use on special Marian feast days and who recounted:

"The first morning in Medjugorje, I attended an early morning Mass. I told Our Dear Lord and Mary, 'I am here, but why?'

"Not long afterwards, the thought came to me: make a retreat out of these days here. I informed my group of the decision, and spent time at the church watching and meeting people from all over the world, praying, hearing a talk in English every afternoon, and above all, curiously watching small groups of ten or twenty people go into one of the sacristies daily.

"When Mass was offered at the main altar in the church, a sister would lock the door to that sacristy. One afternoon when a group came out of this special sacristy, I suddenly rose and slowly walked toward the door and went in. The room was small: a few chairs around the walls, an altar, a large Crucifix behind it on the wall, and in one corner to the left of the altar was one of the ugliest statues I have ever seen of Mary, or so I thought.

"I felt that the lines, the mass, the color all lacked the beauty any art piece should convey to the beholder! But, on second thought, I realized the peasant artisan who made it perhaps caught something Mary wanted to convey to the world: let go of the externals. Internal joy and peace are what truly count, and these he caught!

"About ten minutes later, I slowly started to say the Our Father, and when I came to the last phrase, I gradually opened my eyes on the words, '...for Thine is the Kingdom, the Power, and the Glory.' And then I beheld, to my utter amazement, not the old ugly statue, but a living and most beautiful young woman, about twenty years old, in place of the old statue -- yet it seemed within the lines of the statue.

"I could hardly believe it, and I tried not to close my eyes or even bat my eyelids so that I would not miss anything. She was far more beautiful than any young woman I had ever seen (and being in the theater and having studied in New York City, traveled in Paris, London, Rome, Madrid, etcetera, I have seen some of the world's so-called most beautiful women. But, they  were nothing in comparison!)

"Her eyes spoke. She did not need words. Her look encompassed the whole world; it seemed as if she looked far beyond me, beyond Medjugorje, and so forth. Her skin was young, most beautiful: flushed and radiant, with a rosy-like healthy color. Her one hand extended out, as if to say: Come; be not afraid. I bring what you all want: peace. She did not move forward, but somehow indicated, as she seemed to lean forward, that she would come if invited.

"During all this time, which seemed perhaps longer than it was, I did not want to close my eyes for an instant, for fear that I would lose her. But finally, I had to do so, since my eyes hurt a little and seemed dry. So, I went back into contemplative prayer. As I came out of it again with the Our Father, I opened my eyes, hoping once more to see her... but she was gone, and there was again that old statue.

"The greatest artist in the world would be unable to capture the love and beauty that I saw that afternoon, but I share this poor effort with you in the hope of giving you a vague idea of the love and wonder of Mary."

[photo left: Medjugorje priest, the late Father Slavko Barbaric, with then-Cardinal Joseph Ratzinger (now Pope Benedict XVI). Pope Benedict has not publicly indicated his feelings on Medjugorje but has removed authority for its discernment from local and national bishops, placing it in the hands of a Vatican commission. His predecessor, Pope John Paul II, avowed a belief in the apparitions, as documented by letters sent to a couple in Poland and in a new book, 'Medjugorje: What's Happening?' by Father James Mulligan (Ave Maria Press, Toronto) of Westminster, England. Sister Ambrosine's account is from 'Hey Mary' by George Banworth).