PERSECUTION WATCH: RECENT TREND HAS SOME WONDERING ABOUT FUTURE ATTACKS AGAINST CATHOLICISM

Do you know -- and it's kind of dramatic -- that Cardinal Francis Eugene George, who is 75, reportedly said, in 2010, "I expect to die in bed, my successor will die in prison, and his successor will die a martyr in the public square."

The comment came not over health-care laws, but after passage of legislation that allowed for homosexual civil unions in Illinois.

But there is a connection. The health-care controversy -- which saw more than ninety percent of U.S. bishops issue almost unprecedented denunciations from the pulpit -- was fueled in large part by the same concern that Cardinal George had over civil unions: infringement on religious rights, particularly those of Catholics.

Could it lead to persecution? Is there persecution already? What do prophets say? In 2010, he also spoke at Brigham Young University about the continued need for Catholics and Mormons to stand together to protect religious freedom.

The reaction of Cardinal George, archbishop of Chicago and once president of the U.S. Conference of Catholic Bishops, was understandable when one considers that the issue of gay rights and whether everyone must adhere to them -- hiring active homosexuals, even in parishes, and allowing for their marriage -- could be more dangerous than that of health care for the Church, which may be held for discrimination or even "hate crimes" if it resists.

Such has already occurred in Ireland, where a bishop is under government investigation for "hate crime" remarks (warning of secularism) at Knock, a famous shrine dedicated to a silent apparition.

The same has occurred in Australia and Canada.

In the "public square," the media has long waged a subtle persecution. Look no further than the Boston Globe, which has an outright vendetta against the Church and is owned by The New York Times, which created that global firestorm against the Church in 2010 based on a lawsuit and revelations about a priest named Father Lawrence Murphy, who allegedly abused dozens of youngsters at a school for the deaf in the Milwaukee area -- a lawsuit that last Friday was withdrawn (but with very little media attention).

This is serious business; so are other attacks on the Vatican. While one must note the incredible media uproar at Penn State University -- over a single abuser, where the Church acknowledges 4,000 abuse cases in the past decade -- there is a constant drumbeat that targets Catholicism and entertainers long have been granted free rein to say and portray Catholicism in any way they like, the latest outrage involving some rapper named Nicki Minaj who on the nationally-televised Grammy awards appeared in a blood-red, nun-inspired satin robe with an older man dressed to resemble the Pope as her "date."

As a report said: "The rapper then debuted a new song from her forthcoming album 'Roman Reloaded,' taking religious symbolism to a whole new level of weirdness. Her 'performance" consisted of an onstage exorcism, seemingly on herself, complete with levitations, fire, lighting and gibberish. As a white-hooded, Goth-like church choir sang a chilling rendition of 'Come All Ye Faithful,' Minaj strapped herself to a leather table and was lifted into the air as flames burned beneath."

Such cases have been too numerous to synopsize.

It is also foreseen -- the besmirching of Catholicism, and persecution -- by prophets.

In fact, attacks against Rome are a common theme in Catholic mysticism and have been for centuries.

The famous third secret of Fatima had priests, religious, and a pope injured or killed (which certainly occurred, after that prophecy, under Communism). One of the seers also had a vision of a crowd throwing rocks at a besieged Pope and calling him vile names. One of the secrets at LaSalette -- another Church-sanctioned appearance, this one in France -- said that one day the Church would "be in eclipse" and that "all the civil governments will have one and the same plan, which will be to abolish and do away with every religious principle, to make way for materialism, atheism, spiritualism, and vice of all kind." (It also said that "seasons will be altered," which should give us further pause). "A time of darkness and the Church will witness a frightful crisis," it added -- referring not just from persecution from without but the infiltration of evil in the Church's own ranks (see again: abuse crisis).

While that part of the prophecy was never officially approved (certain bishops along with a Pope believed it; others, including the local one, did not), it certainly had a ring to it.

"In the year 1864, Lucifer, together with a large number of demons, will be unloosed from hell," said the Blessed Mother -- allegedly -- to a girl named Melanie. "They will put an end to faith little by little."

"Priests and religious orders will be hunted down," said the alleged prophecy, "and made to die a cruel death."

Others have been more recent, including one in Spain that saw the Pope in hiding before a "warning" that would come to the world and Japan where a mystical nun quoted Mary as telling her that "the priests who venerate me will be scorned and opposed by their confreres... churches and altars sacked."

In Ireland a seer was told that the Church "will be shaken, even to its foundation" (which, in another media onslaught, has certainly happened there).

That a pope would be sent into exile or even killed has long been a mainstay of lesser prophecies -- dating back to the Middle Ages, and even to the Book of Revelation.

The Church has seen persecution throughout recent times -- by the Fascists in Italy, the Masons and civil warriors in Spain, by a similarly anti-Catholic regime in Mexico (a bomb was exploded at Guadalupe) and then the incredible happenings that took place under Hitler, Stalin, and Mao (4,314 places of worship were abandoned in Yugoslavia alone; thousands of priests were killed in places like Ukraine).

Could it happen again? Are we seeing the initiation?

Or is it something that could never occur like that again?

In a mystical revelation St. Malachy supposedly was given a list of all future popes and many interpret the current one as being second to last -- to be followed by one Malachy described as "Peter the Roman." "In the final persecution of the Holy Roman Church there will reign Petrus Romanus, who will feed his flock amid many tribulations," said this saint (according to legend).

Added Pope Pius X: "I saw one of my successors taking to flight over the bodies of his brethren. He will take refuge in disguise somewhere and after a short retirement he will die a cruel death. The present wickedness of the world is only the beginning of the sorrows which must take place before the end."

And then there was John Paul II.

During a trip to Germany in November of 1980, according to a periodical called Stimme des Glaubens, John Paul the Great told a small gathering that the Church was prepared for future trials, even martyrdom -- an ironic statement coming as it did just a few months before an assassin shot him.

It is necessary, said John Paul, "to give ourselves completely to Christ, and for Christ!" Through prayer, he supposedly said, it is "still possible to diminish this trial, but it is no longer possible to avert it, because only in this manner can the Church be effectively renewed." The Church had often been renewed with blood, and it wouldn't be different now, he pointed out.

"Be strong! Be prepared! We should trust ourselves to Christ and His mother, pray often, and say the Rosary. Then, although we have done little, we have done everything." 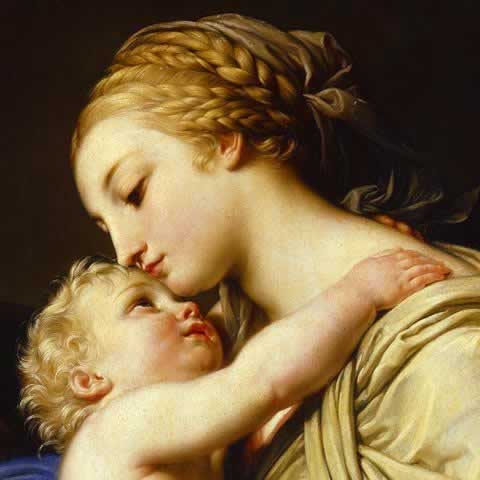