ronic it was that there at the Vatican under St. Peter's on Monday -- in the hallowed crypt wherein resides the body of John Paul II -- the new pontiff, Benedict XVI,  celebrated a Mass of suffrage that marked the thirtieth day since the death of his predecessor.

It was ironic because the duty to celebrate such a Mass (and pray for the deceased) is right there in the new Catechism -- which was written at the direction of John Paul II and by a commission headed by  Pope Benedict XVI, who at the time, of course, was Cardinal Joseph Ratzinger.

Says that Catechism: "From the beginning, the Church has honored the memory of the dead and offered prayers in suffrage for them, above all the Eucharistic sacrifice, so that, thus purified, they may attain the beatific vision of God."

And so that was one irony: the man who rewrote a Catechism that spells out such prayer, now, as pontiff himself, praying for the one who commissioned it. The Mass  was said before a tomb covered with a simple slab of Carrara marble on the bare earth, which was also at John Paul II's direction.

But there was a second irony, one that may come into greater focus in coming days. This time it had to do not with praying for the deceased, but in asking for their prayers.

This too is in the Catechism.

"Witnesses who have preceded us into the kingdom, especially those whom the Church recognizes as saints, share in the living tradition of prayer by the example of their lives, the transmission of their writings, and their prayer today," says the Catechism, which every Catholic should possess. "Their intercession is their most exalted service to God's plan. We can and should ask them to intercede for us and for the whole world [our italics]."

If our mailbag is any indication, many are already asking for the assistance of John Paul II and, it appears -- from anecdotal accounts -- are receiving answers to those prayers. Meanwhile, according to news accounts, reports of miraculous cures already are streaming into the Vatican. We'll report on those in the future. Right now we have only our own little snippets.

Will John Paul II turn out to be a great intercessor?

"I have a priest friend in the diocese of Scranton, who recently had a problem with his eye," writes a viewer from Pennsylvania. "He was experiencing visual problems and there was a swelling. He visited an opthamologist in Philadelphia seeking help.  He asked to be put on our prayer line and personally asked Pope John Paul's intercession. After his second visit to the doctor she advised him -- and she used the term 'miraculous' -- that in lieu of surgery she discovered there was a contact lens that could help him."

Something similar was reported in the neighboring state.

"During our bimonthly Mass with healing prayer at St. Peter's Church in Point Pleasant, New Jersey, a parishioner was instantly healed of fibromyalgia, through the intercession of Pope John Paul II," writes a viewer from there named Dorothy O'Reilly. (Fibromyalgia is a common and chronic arthritis-like disorder characterized by widespread muscle pain, fatigue, and multiple tender points.)

"I don’t know if this is a big thing," writes yet another Catholic devoted to the late Pope. "My husband called me from work about two or three weeks ago, and said that one of his co-workers, who was in his early forties, had a massive heart attack and the doctors didn’t expect him to live. I put him on our prayer chain and said, 'Okay, John Paul the Great, please: if you can help this man and his young family, intercede to have him make a full recovery.'

"My husband came home two days later and said that the man, who had also been given Last Rites, was out of ICU in a regular bed. A few days later he was home, with only a bruise on his head where he hit it as he fell during his heart attack. The gentleman, who wasn’t supposed to live, was back at work this past week!" 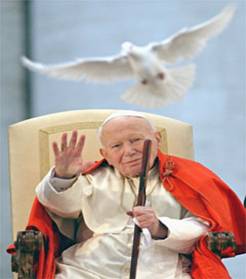 Naturally we can't verify all such accounts, and the Vatican uses strict protocols before it considers even the most spectacular healings to be "miraculous." But coming so soon after his death, they are certainly intriguing.

Favors, large and small. It would be surprising if such a great and holy man wasn't interceding. As for more commonplace stuff:

"I know this isn't miracle material, but my husband hit an animal last week and went off the road, heavily damaging his truck underneath," comments  Jessica Hahn of Edwardsburg, Michigan. "We prayed that day and night to our Papa, and when we went for repairs the next day, it ended up going from over $1,000 for repairs to something my husband was able to do with his friend in one day, costing us less then $100.  Not miracle status, but for a family whose budget is overstrained already with a new baby (three kids total) and who have to choose what bills to pay each month, this was a lifesaver!"

From simply doing schoolwork to coping with learning disabilities, readers assert they have seen results after invoking a man many are now referring to as "John Paul the Great." And anecdotal or not, some of it seems to glide past happenstance.

"My four-year-old daughter, who has a severe receptive and expressive language disorder, was evaluated for speech therapy," writes Noelle Martinez. "She had been turned down by the insurance company two times, and was again this last time until I prayed to Pope John Paul ll and asked for his intercession. After the third denial, her doctor talked to the medical director -- who gave her 32 speech therapy sessions (and may be followed by more). This is unheard of."

There are the prayers that have an effect on a spiritual level.

"I asked John Paul the Great to intercede for my father-in-law," writes another reader named Denise M. Babbitt of Grand Haven, Michigan. "He is dying of lung cancer and has been away from the Church for sixty years.  Through John Paul's intercession, my father-in-law agreed to receive the anointing of the sick, go to Confession, and has received Communion.  His physical health has also improved."

The issue of the late pontiff's sainthood will be raised in the coming months, with no one sure at this point if Benedict XVI will canonize as many as John Paul II did and whether, as in the case of Mother Teresa, the process will move as quickly. Pope Benedict "could say there is enough proof from the massive acclamation we have seen in recent weeks," notes one expert,  Monsignor Robert Sarno, a Brooklyn priest who is a key official in the Congregation for the Causes of Saints.

And that would allow the church to capitalize on the "tremendous moment of evangelization" provided by the worldwide media coverage of John Paul's death. The Congregation that deals with saints already has 350 cases pending, and there is usually a 15-year wait for a tribunal to consider their merits before sending a recommendation to the Pope. "Even before John Paul was buried, though," notes a newspaper, "cardinals began calling for his sainthood." At his very funeral were the shouts, "Santo subito!" (sainthood now).

To declare him a saint immediately, however, Benedict would have to suspend the requirement that five years must pass before the process begins and suspend the rule that two miracles must be attributed to the late Pope -- unless of course the miracles come in rapid succession.

Favors, large and small... Are they really the sign of intercessions to come?

"Just one week ago I was in my backyard looking at a lilac bush that my late husband planted at least ten years ago and that had never bloomed -- not so much as one bud," notes yet another viewer during this the month of May -- which means the month of both flowers and Mary (to whom the Pope was so devoted). "I prayed to the Holy Father to have that bush bloom, then I would know he truly heard my prayer. I felt a little guilty for praying for something so unimportant -- but two days ago I was looking at that same bush and saw that there are now four branches which have flower buds on them."