No question, the Pope is upset. Carrying on the legacy of John Paul II -- who went so far as to visit a mosque -- Benedict XVI could not have meant to cause the offense he caused. Indeed, he has plans to visit Turkey, a Muslim nation. He has said he is sorry, which should defuse things.

But it was baffling. During his trip to Germany, the Pope referred to a 14th-century Byzantine emperor named Manuel II Paleologus, who said: "Show me just what Mohammed brought that was new, and there you will find things only evil and inhuman, such as his command to spread by the sword the faith he preached."

It was more a case of an intellectual discourse and perhaps therein was the problem. The pontiff was pointing out the failing of radicals to act with reason -- drawing the distinction between how many Muslims perceive God, and how Christians do -- but it was too nuanced for general consumption and the reaction now raises the issue of Muslim-Christian relations: will they recover? Will it now take a special effort on the part of the Pope to repair the damage? Will the issue quickly fade? Should he care? Or will it consume a good part of his pontificate?

Unfortunately, too many Muslims are only too quick to jump on any offense and use it as a pretext for violence, raising this question too: will the remarks focus terrorist attention on Catholic and particularly Vatican targets?

In the wake of his remarks al-Qaeda-linked websites began referring to St. Peter's Basilica as a special focus of attention and there were threats to eradicate "the cross." Churches in the Middle East were damaged. A nun was shot to death. The word "persecution" arises.

"We shall break the cross and spill the wine ... God will (help) Muslims to conquer Rome ... (May) God enable us to slit their throats, and make their money and descendants the bounty of the mujahideen," said the statement, posted on Sunday on an Internet site often used by al Qaeda and other militant groups. 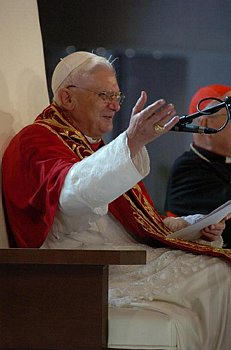 This has long been a concern and is thus in special need of our prayer. In fact, al-Qaeda once plotted the assassination of John Paul II during a visit to the Philippines (the plot was exposed when a bomb the would-be assassins mysteriously exploded in their apartment), and Italian police have rounded up dozens of terror suspects in that country, including some who appeared to have had designs of the Basilica of St. Anthony in Padua.

We are not to back down from the truth but we are to seek common ground and pray. Many are those who have noted the irony that Fatima in Portugal -- one of Catholicism's holiest places -- was named after a princess who in turn was named after Mohammed's daughter.

Some see that as Heaven's attempt at reconciling two religious systems that have been at odds for many centuries -- although not in a way that would compromise Christianity. At Medjugorje, the Blessed Mother allegedly has referred to the reconciliation of the three chief religions there: Catholics, Orthodox, and Muslims, who have long been battling there.

The Pope's message, obscured by the academic setting in which it was delivered (the University of Regensbush University), carried the simple and truthful message that religion should never be the motivation for violence -- that it contradicts both God and reason. But the phraseology and timing -- in the midst of tensions from the Middle East to Afghanistan -- threatened an ordeal that could be long-term and present the most acute geopolitical crisis for the Vatican in decades.

While many feared for Catholic targets, the approach of the Vatican through John Paul II seemed to have put a damper on such plots, but the furor -- if not assuaged by Benedict's sincere apology by mid-week -- could reverse that trend. That Muslims take extreme measures against critics has been demonstrated countless times, including through death sentences or fatwa issued against writers such as Salmon Rushdie.

It is one thing to criticize terrorism and violence. It is another to utter the name Mohammad in a negative context. Doing so had caused an uproar a few months back -- an outcry worldwide -- over a simple cartoon in Copenhagen.

Any criticism of the prophet Mohammed is taken with fantastic sensitivity.

Already, five churches have been firebombed in the Middle East in response, and so there is the need for prayers of protection. A third priest may now have become a victim of the violence and lawlessness in Baghdad. Father Basil Salem Yaldo was last seen leaving a church building in the Dora area of Baghdad. He is the personal secretary to the Catholic Patriarch for Iraq. At the time of his disappearance, a car bomb had exploded in the vicinity and a round-up of suspects took place by Iraqi and Coalition Security Forces. "It is not known if Father Basil was taken into custody or is being held for ransom or worse," a source in Baghdad informs us.

It must be recalled that it was a Muslim Turk -- albeit one controlled by Soviet forces -- who attempted to kill John Paul II.

"Concerning the reaction of Muslim leaders to certain passages of the Holy Father's address at the University of Regensburg, it should be noted that what the Holy Father has at heart -- and which emerges from an attentive reading of the text -- is a clear and radical rejection of the religious motivation for violence," said the Vatican.

"It was certainly not the intention of the Holy Father to undertake a comprehensive study of the jihad and of Muslim ideas on the subject, still less to offend the sensibilities of Muslim faithful."

Unfortunately it did, and now the question is whether the uproar will continue or quickly dissipate. Such questions are especially pertinent at a time when many fear a terrorist attack is approaching. Many have been the dates set forth for another 9/11, and these should be taken with a big spoonful of salt.

But worries there are. In a note to this website, a diplomatic official in the Middle East has raised the issue of the Muslim holy period of Ramadan and whether it will spawn a terrorist attack. That period begins September 24 and ends October 23.

Military and other government sources are circulating "open-sources" documents -- information available to the general public -- that hints at other information indicating the possibility of an attack.

"This report does not identify a specific type of attack coming from Al Qaeda, yet makes a general assessment of imminence of a mass casualty event based upon analysis of the recent statements by Dr. Ayman al-Zawahiri and Adam Gadahn a/k/a 'Azzam al-Amriki,'" noted one e-mail making the rounds, referring to terrorists.

Such correspondence is rife with speculation and at times errors.

But it demonstrates an undercurrent circulating among diplomats.

"Overall I believe this report reinforces my assessment/dot-connecting exercise of yesterday wherein I postulate a possible timing scenario of a nuclear/radiological attack within CONUS [continental U.S.] by Adnan el-Shukrijuma based upon data going back to 2003," said one analysis.

"I also note there is a brief reference, although not as clear as I would have stated, to the 'messaging shift by Al-Qaeda in Oct. 2004.' Specifically, and to clarify that reference - the messaging shift was a video of Osama bin-Laden, the first in more than three years, appearing with all the pretense of a head-of-state, leader of the Islamic Khalifa or the al-Mahdi himself, directly addressing the people of the United States of America immediately prior to a major presidential election. Bin Laden's call was for the American people to choose wisely, about the 'best way to avoid another Manhattan,' and that 'the motives exist for repeating what happened' along with a reference that this war had its genesis with US/Israel aggression in Lebanon in 1982.

"As we all know another major election looms before America fifty-four days from now. My postulated window of nuclear/radiological attack by Al Qaeda falls within this time period. In comparing the message of Osama bin Laden in 2004 with the current words of al-Zawahiri of the 'days being pregnant,' we appear to have come full-circle with Al Qaeda in these past two years."

At least one Muslim leader, Syed Ahmed Bukhari, the chief cleric of New Delhi's historic Jama Masjid, India's largest mosque, extolled Muslims in the wake of Benedict's remarks to "respond in a manner which forces the pope to apologize." He did not elaborate.

Will it trigger a long-planned event -- or even shift attention from U.S. targets to Catholic ones?

It is the time to pray. Many are those who have seen an attack on a Church target and perhaps even the Vatican as a prophetic event. Some believe that in keeping with Muslim law, terrorists have called for conversion, granting enemies an opportunity to come to their religion, as a prelude to attack. Others claim Muslims have been urged to leave the U.S.

Concern has been raised about an alleged sighting of Adnan El Shukrijumah, a suspected al Qaeda organizer who is the subject of a worldwide CIA manhunt and is believed to be working on Bin Laden's plan to trigger a radiological disaster.

His "sighting" was at McMaster University in Hamilton, Ontario -- which has a nuclear reactor as well as radioactive wastes from a medical facility. The concern is a "dirty bomb" that would involve a regular explosive causing dispersal of radiated medical or other wastes. Despite reports, McMaster denies that such material is missing.

A Pakistani journalist who interviewed Bin Laden years ago and has sources in the terrorist group claims that "al Qaeda and Taliban fighters referred to attacks targeting the U.S.-led coalition forces during the Muslim holy month of Ramadan, which begins September 24."

With prayer and fasting, such will be prevented, as prayer thus far has prevented attacks.