It was a devastating week for those who have sought so long -- and so ardently, in Catholic and secular circles alike -- to downplay the evil of our time, who have taken what can only be called the Pollyanna approach (said in frustration), and who have admonished those who rail against the present darkness (as focusing too much on the "negative").

There in the Pope's Good Friday meditations were statements that set such views into a contrary and bold perspective.

At the Third Station, Benedict XVI -- whose very namesake is identified with battling darkness -- took aim at large segments of our society when he described them as a "cult of Satan."

A cult of Satan.

"Lord, we have lost our sense of sin!" intoned the Supreme Pontiff. "Today a slick campaign of propaganda is spreading an inane apologia of evil, a senseless cult of Satan, a mindless desire for transgression, a dishonest and frivolous freedom, exalting impulsiveness, immorality, and selfishness as if they were new heights of sophistication. Lord Jesus, open our eyes: let us see the filth around us and recognize it for what it is, so that a single tear of sorrow can restore us to purity of heart and the breadth of true freedom. Open our eyes, Lord, Jesus!"

Strong words, fantastically strong words, and at the Seventh Station they were followed by others.

It was at that Station -- from a prepared text -- that Benedict XVI referred to attacks on traditional family life as "a kind of anti-Genesis, a counter-plan, a diabolical pride" which seeks to "modify the very grammar of life as planned and willed by God."

The Pope who had surprised everyone with his encyclical on love was now surprising those who thought that the papacy had made him a soft touch.

Few are those even in fundamentalist Pentecostal-type camps who have come out with such a strong rebuke -- certainly not one so well-worded.

And that was not the whole of it.

Leading up to Holy Week, on Palm Sunday, Benedict, wearing red and white vestments, had urged the young people not to give in to the temptations of worldly riches and moral irresponsibility.

Here he again had used almost startlingly strong language -- describing such temptations as "the language of the serpent."

To those in both liberal and conservative camps who have ignored the troubles of our time, who shun talk of evil, particularly in the West -- where materialism, where libertine sexuality, and where media are most rampant -- the words had to have been jarring.

They were not a total shock. As prefect of the Congregation for the Doctrine of the Faith, Benedict XVI also had written a note expressing concern about the diabolical side of Harry Potter.

But with the words at the end of Lent, during the most holy time in the Catholic faith, the Pope was declaring our time as an almost apocalyptic battle between light and dark -- a time that had to draw back on the garden for perspective. 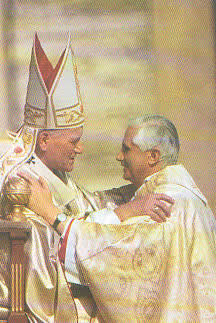 A darkness had gathered, the Pope was saying.

And as such it was a continuation of what John Paul II had said.

Indeed, in one of the his very last letters (a message for the Roman Catholic Church’s World Day of Missions just before he was hospitalized), Benedict's mentor and predecessor had said that "in our day human society appears to be shrouded in dark shadows."

Before he was Pope, in 1977, on a visit to New York City, the future John Paul II had even foreseen the current time as the "apocalyptic" confrontation between good and evil.

That remark has been under-reported by those who insist instead upon focusing  solely on the coming of a "springtime" for the Church -- something John Paul II had also foreseen.

But now it was clear both popes believed that before such a springtime, there would be a winter.

Such evil grows, wrote John Paul II (in his last book, Memory and Identity), when we lack recognition of it.

In Eastern Europe, he noted (referring to Nazism), "we were totally swallowed up in a great eruption of evil and only gradually did we begin to realize its true nature" -- an admonition to societies that are now on a similar trek but in the guise of secularism, scientism, and hyper-capitalism.

Recognizing evil, John Paul implied -- as now does successor -- requires holiness. Those who don't see it are blinded by spiritual blockage. The "illuminative stage in the interior life," John Paul had said, stunningly, "emerges gradually from the purgative stage."

Translation: It is a time for all of us to purify, so we can see.

The truth sets us free, when we let it.