From the mailbag, a potpourri of the mystical:

AT TIME OF BOGUS E-MAILS AND PROPHECY, WHAT TO MAKE OF THOSE HAVING 'DREAMS'? 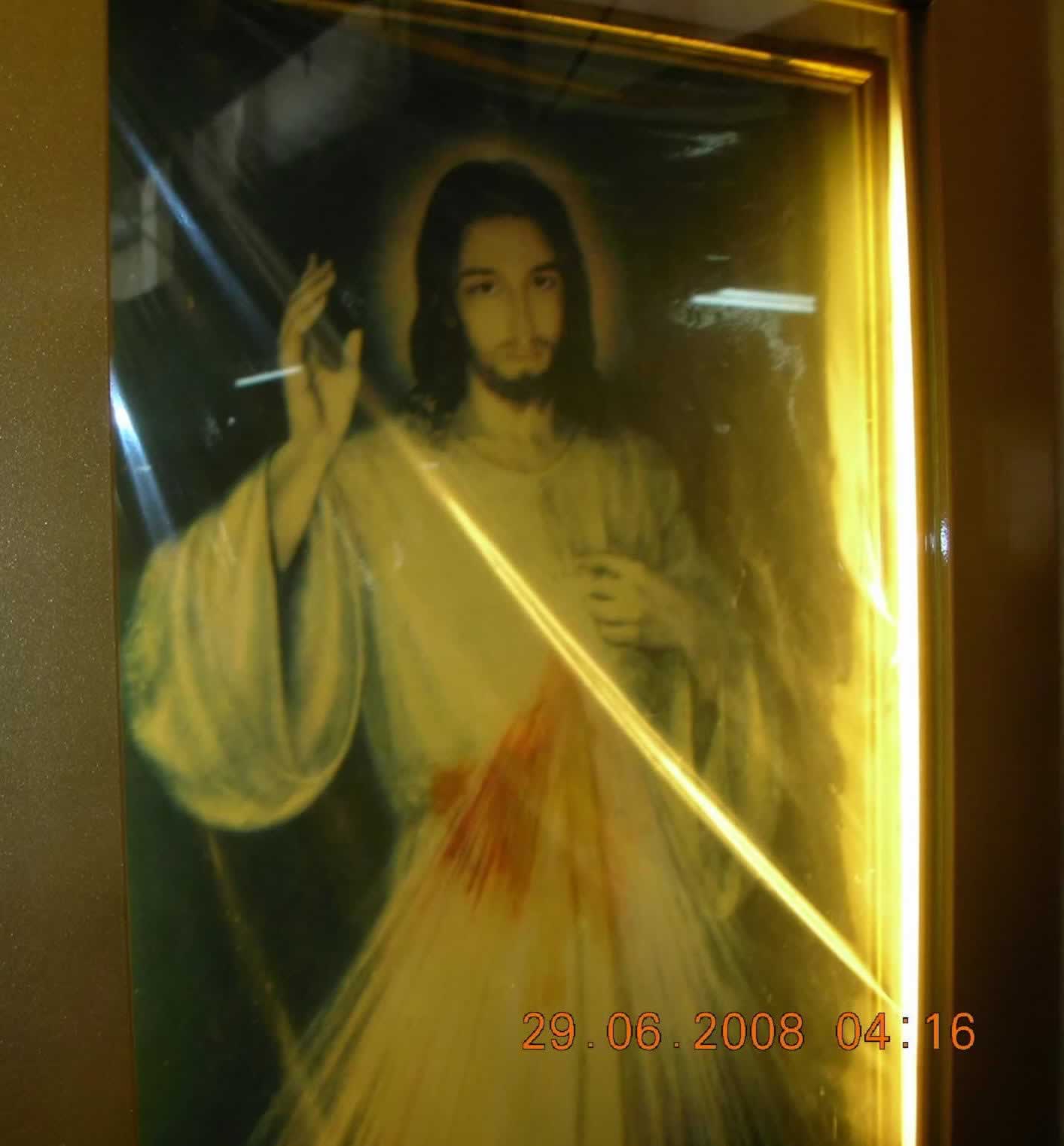 It is a raucous time on the prophecy beat -- which, strange as it may seem to some, we cover. In the coming years, it will probably be more raucous. That's our own prediction.

And thus, more than ever, caution is in order.

Discern carefully. Don't jump the gun. Watch where messages are coming from.

Most recently, an e-mail has circulated claiming a dramatic "emergency" message. Rarely has a rumor moved so fast. By mid-morning Monday, it was beginning to fill our box. It was so pervasive that we issued a special advisory (pleading with folks to treat it skeptically). Said the bogus e-mail:

"The last child (grown now) from Medjugorje, Yugoslavia, who is the only one left seeing the Blessed Mother and receiving messages, has received an 'urgent call from Our Lady for America'! What is going to happen to the United States is so bad that she has asked each of us to pray three Hail Marys every hour for twenty-four hours. It was not specified how, when, or where... but the request is for 'reparation for all of the sins committed against the Sacred Heart of Jesus' and 'against the Immaculate Heart of Mary' and for the 'conversion of the United States to her Son' and 'our safety.' And finally 'for all of her intentions' which were not mentioned."

"It is all very grave," continued the message, "but in what manner we do not know! I have heard some have asked their Guardian Angels to awaken them and remind them each hour at 13 minutes after the hour in unity with the time [sic] that Holy Mother has appeared at many accepted apparition sites. God Bless the world and we thank Him for giving us this warning..."

Please do not attribute it to us. What we are saying is that (save for the fact that we always should pray) it should be entirely disregarded. The problem? There is not just one person at Medjugorje still receiving messages; there are three. Meanwhile, the youngest seer is not among them (his daily apparitions halted in 1998). At Medjugorje, as far as anyone knows, they do not see "Our Lady of America" and may not even be aware of that reputed apparition. And thirteen minutes after the hour is not when Mary is seen. "Thirteen" (as at Fatima, which began on May 13) refers not to time but often the date Mary manifests (the great sun miracle was October 13, 1917).

We don't like being dismissive but this was in such wide circulation that it forced our hand. We are told that some virus sites are even using it as a lure. We are in touch with very well-placed folks when it comes to Medjugorje and have no indication that anything new has been said whatsoever. It is another rumor -- at a time of many rumors: Perhaps a little attempt at sabotage.

Not that we discount prophecy. We believe in giving it air because it has no other major forum and we agree that we are in special times. Especially, we consider what it says in Joel 2:28 about common people getting "prompts" in the Spirit.

Are such prompts occurring in the populace? We have often carried stories about the way so many feel something is coming.

Just be careful. Can we glean anything from them -- or are they just... dreams?

A recent article we ran that had a footnote about a dream concerning water drew a reaction from others who have been feeling or dreaming the same thing. It is a study in how difficult it is to discern. Is it simply a common matter one would fret (and thus dream) about, or a "word of knowledge"?

"I got a shock when I saw your article today about the reader who watched the rising waters, as I had the same sort of dreams lately," wrote a woman from Texas. "I had a series of dreams which all involved total destruction of all I owned (but no loss of life), and in one my belongings were in Galveston (an island) and I was on the mainland standing next to my car, watching the waters get deeper and deeper. In each dream, water threatens my mother's house on Galveston (in which I live in the dream but not in reality). Sometimes I watch the water get deeper, or see various household objects float away, or see the results after the water damage.

"Since we have hurricanes here, I interpreted these dreams to refer to a hurricane. A very strong storm would wipe out everything. I had up to six of these dreams within a week in June. However, I should mention that these dreams have rising water but not rain, and no threat to life, just property. The rising water seems almost flat, rising but without wave action like you would see in the Gulf.

"I had another dream I wanted to report. In December, I was praying about how to prepare for future events. Should I learn CPR? Buy a tent? I had a dream in which my husband and I were walking west, toward San Antonio. We arrived at the edge of a small town. I realized as we walked toward the people there that we literally had nothing except our own empty hands and the clothes we walked in. We were completely dependent on the hospitality of these people (and many more had arrived before us).

"When I woke, I took this to mean to prepare spiritually: the usual physical preparations were pointless. I know many have said this before; but this dream brought it home to me in a way I could understand. The small town we walked to in my dream was not named but I believe it was between Houston and San Antonio, closer to San Antonio than Houston. There was nothing particularly distinctive about it, but I remember thinking it was like Joseph and Mary arriving in Bethlehem, and that I would be grateful for a spot in a barn with some clean hay."

How do we interpret such?

And when we do overly alarm ourselves?

The answer is that we all follow what God places into our intuition after we pray our own prayers.

"Just read your piece today on 'doom and gloom' prophecies," said another viewer, referring to an article in which we warned about end-of-the-world prophecy, but also cited apparitions indicating huge future events. "What caught my eye was the small-print account of a dream sent by a reader, at the bottom of the piece.

"I immediately thought of two dreams I had last year, and a dream a friend of mine had. I saved the e-mails we sent back and forth and did a little cut and paste below of those.

"Waves, oceans, large lakes, surging stormy water... no water…hmmm. Oh, and we both had these dreams in December 2007. That reader also mentioned that her dream seemed to take place around Christmas. Hmmm. It was not Christmas in my dreams. It was kind of cold, though. For your discernment, in case you are getting any similar accounts.."

We are. Does it bear significance? 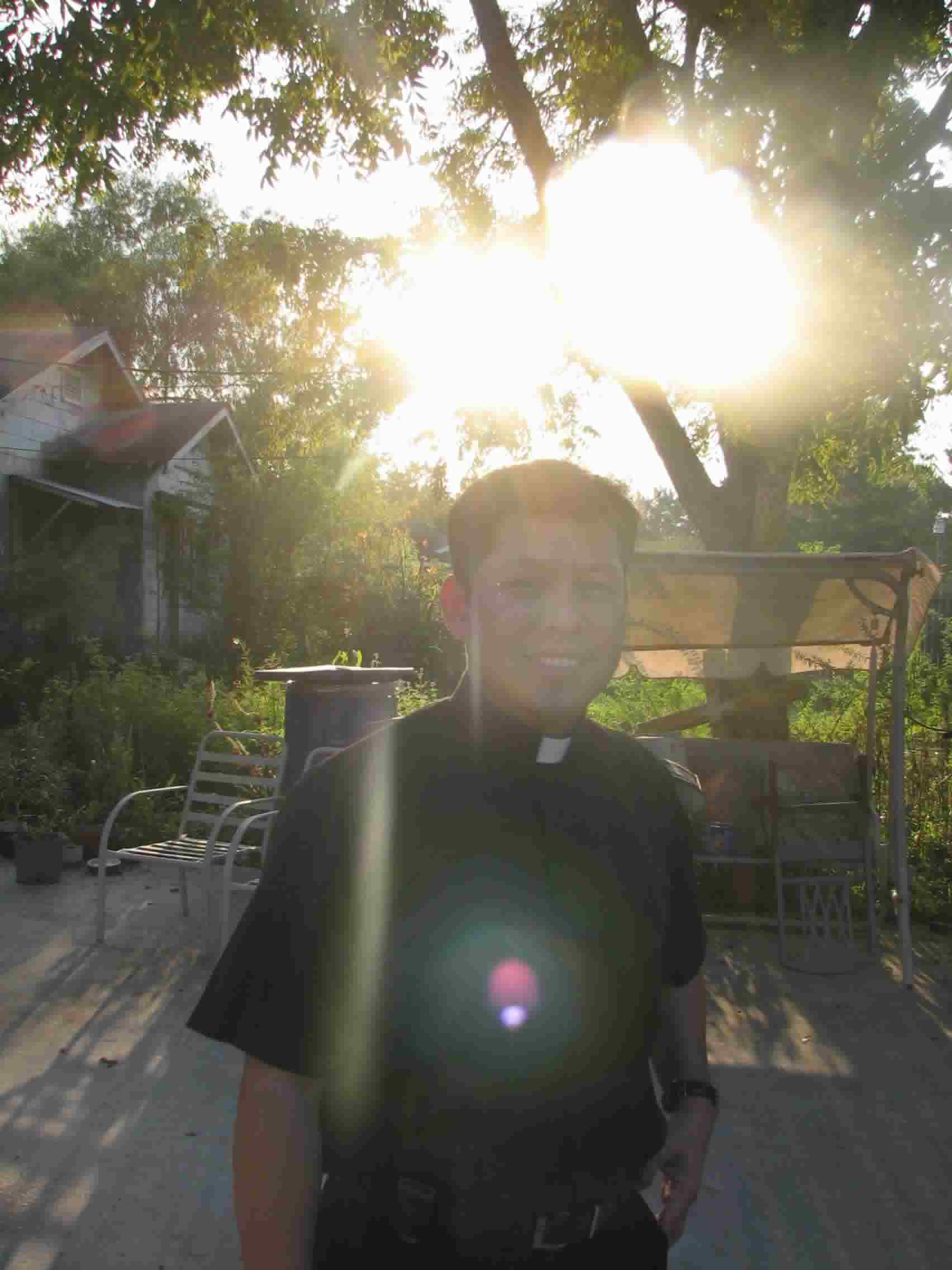 If there are indications that God is simplifying and purifying us (and we do believe that), there are also the graces!

"Attached please find a photo of a priest whom I believe God is using in a special way," says Patrice Haftman of League City, Texas (a state we will visit soon). "This priest (with a special devotion to the Virgin Mary) is from the Philippines, but is currently serving as a hospital chaplain at the Texas Medical Center. He had just finished saying Mass where seemingly by chance, I was in attendance. As he was leaving to go back to the hospital, a woman asked to take his picture.

"A little while later, the woman who took the picture (whom I had never met) approached me and told me that she has the gift of seeing the 'Miracle of the Sun' and she didn't know why, but the Holy Spirit told her to show me the picture. If you look closely, you can not only see three suns in the photo, you can also see what I believe is the Sacred Heart of Jesus shown in light on the heart of the priest."

He is said to be an agent of healing.

We discount nothing that may be from the Holy Spirit, although we appreciate skeptics.

And one was certainly Archbishop Raymond Burke of St. Louis, who now has been promoted to the Vatican. And here, there are coincidences. These too are "signs" of our times. This too is mysticism. As the biography in Wikipedia recounts, Archbishop Burke was:

* Born on the Feast of the First Martyrs of the Holy Roman Church (June 30)
* Baptized on the feast of St. Benedict (July 11)
* First Holy Communion on the feast of Our Lady of Fatima (May 13)

Coincidence is one thing. Can we take anything from numbers?

"With great interest and curiosity, I clicked on the link to the article 'Ex-gay confronts Obama's theology,'" wrote Betty Zinke from the West Coast. "My interest was further piqued when the author referenced Luke 17 in which Our Lord warned that the last days would resemble the days of Sodom. I have felt '17' to be a harbinger of something that has left me with an unsettled feeling (something to the effect of the end of things as we know them).

"'But on the day when Lot went out from Sodom fire and brimstone rained from heaven and destroyed them all -- so will it be on the day when the Son of Man is revealed" (Luke 17:29-30).'

And what of all the images? In India, an image of Divine Mercy is said to bleed. Might that signify indeed that the period of special mercy is nearing an end?

"These are the pictures taken out by a friend when she visited the St. Michael's church in Mahim on Sunday," wrote a viewer who sent the image at the top of this article. "On June 27, 2008, the feast day of Our Lady of Perpetual Succor, a picture of the Divine Mercy of Jesus started bleeding. Throngs of people have been visiting this holy ground and the awesome presence of the Lord can be felt."

Our Lady of Prompt Succor is especially know to New Orleans.

But back to dreams!

Recounted another viewer: "My e-mail to my friend on Dec. 4, 2007: 'Boy did I have a strange dream last night (Dec. 3, 2007). Part of it anyway. I was in a group of friends, and you were there. We were sitting on what seemed like a Lake Michigan beach, but it also was a beach in Florida off the Gulf of Mexico. It had features of both and actually had mangrove trees growing in spotty places in sandbars off the shore. Weird. But it was cold water.

"Then I looked up at the water and the waves suddenly had changed and were huge and the surf was surging and agitated. It got cloudy. I said it looked like an earthquake had occurred under the water and we had better get out of there because the water and waves were surging. We all ran for high ground, then the water calmed down a little and a lifeguard swam out to rescue two swimmers who had almost been washed out to sea.

"Also.. we watched all the mangrove trees get swept away in the huge waves and current, and a big tree on land fell down in the water, too, almost on top of all of us."

Is it just hurricane season?