A new book published by a major Catholic publisher argues that massive defections to "pentecostal"-style denominations and the near-disappearance of exorcism can be traced to an historic shift in Catholicism away from spiritual gifts prevalent in its first centuries -- and at the time of Jesus.

The book, Resisting the Devil, by Neal Lozano, notes that establishment of an ever-tighter hierarchy, an over-reaction to early misuse of prophecy, and a shift toward viewing spiritual gifts -- "charisms" -- as something possessed by only a special few saints has led to a devastating decline in the mystical body.

Writes Lozano -- in a work published by Our Sunday Visitor:

"The fight for unity, as well as the battle against heresy and abuse, shifted from the local communities -- where charisms were active -- toward established Church office. Through the centuries, the sense of the 'workings' of the Spirit through individuals, or groups, apart from ordained leaders, decreased. All of the charisms suffered."

Focusing on deliverance of evil spirits -- which today is rarely practiced by typical Catholics and clergy, and all but unmentioned at the pulpit -- Lozano points out that Jesus Himself directed not just His apostles, but all His followers to cast out evil in His Name, as well as to heal the sick.

"The Christians of the first three centuries referred to the use of this charism simply as casting out of the evil spirits," notes the book, which has just been released. "They did not use any formal ritual, just spoke in the Holy Name of Jesus, only gradually adding the Sign of the Cross and, in some cases, exsufflation (breathing on the afflicted person)."

Since the seventeenth century, deliverance from evil spirits has been "erroneously" restricted to the clergy, argues Lozano -- drawing a differentiation between "deliverance" and a "solemn exorcism" (the latter in cases of full-fledged possession, and indeed restricted to special priests who need the permission of the bishop).

For the first three centuries, he says, they did just that. In fact, it wasn't until 1614 that there was a formal Rite of Exorcism. In the second century St. Justin Martyr wrote that "many of our Christian men exorcising [numberless demoniacs] throughout the whole world in the Name of Jesus Christ... have healed and do heal, rendering helpless and driving the possessing devils out of the men, though they could not be cured by all the other exorcists, and those who used incantations and drugs."

As another major Church historian, Origen (203-250 AD), recorded in his writings, deliverance was commonplace,"without the use of any curious arts of magic, or incantations, but merely by prayer and simple adjurations which the plainest person can use. Because for the most part it is unlettered persons who perform this work; this making manifest the grace which is in the Word of Christ, and the despicable weakness of demons, which, in order to be overcome and driven out of the bodies and souls of men, do not require the power and wisdom of those who are mighty in argument, and most learned in matters of faith."

Yet, precisely that has occurred -- with an academic approach now so dominant that matters of exorcism are often placed not just with academic types like theologians but in the hands of psychotherapists -- who often don't believe in demons.

The close watch on exorcism is understandable -- there have been many abuses with exorcisms through the centuries, as well as inherent dangers -- but has grown to the point where, as one major exorcist, Father Gabriel Amorth of Rome notes, "even within the Church, we have clergy and an episcopate who no longer believe in the devil, in exorcisms, in the extraordinary evil that the devil can cause, nor in the power that Jesus has given us to drive out demons.

"For three centuries, the Latin Church -- in contrast with the orthodox Church and various Protestant confessions -- has almost entirely abandoned the ministry of exorcism. As the clergy no longer practice exorcisms, as they no longer study them and have never seen them, they no longer believe in them. And nor do they believe in the devil either. We have entire episcopates that are hostile to exorcisms."

"Among other things, Church authorities are responsible for good order, for appropriate liturgy, and for the teaching of universal practice and belief," writes Lozano, who with his wife specializes in deliverance. "Sometimes our leaders, successors to the Apostles though they are, might be uncomfortable by the claims that God is using lay people apart from the current structure of ministry. That may lead them to minimize the importance of certain charisms."

Indeed, many are the reports of parishes or even dioceses that restrict or prohibit deliverance and the laying-on of hands -- as well as other practices such as Adoration of the Blessed Sacrament.

That lacking may be what is holding back a reunification of Christian faiths.

The loss of mysticism did not signal growth or a higher level of development, says the author, "but impoverishment."

"Both statistical and anecdotal evidence suggests that Catholics in developing countries are leaving the Church for pentecostalism in large numbers," says Lozano, who adds that a bishop he worked with in Africa explained that "many people were leaving the Catholic Church and joining pentecostal churches in order to find help in breaking free of demonic bondages." 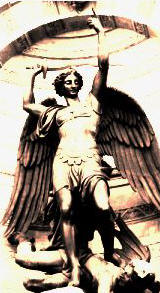 Lozano is careful to differentiate between "private" deliverance and the more involved rite of "public" exorcism. He quotes a scholar named Father Jeffrey Grob of the Chicago Archdiocese as writing (in his doctoral thesis), "An exorcism is considered 'public' when an authorized person using an approved rite does it in the name of the Church. A 'private' exorcism is not bound by the same constraints and may be celebrated by any of the faithful."

It has been pointed out that the very last words of the Lord's Prayer are in effect a private deliverance.

St. Irenaeus (second century) wrote that "those who are in truth His disciples" practiced charisms and "truly drive out devils, so that those who have thus been cleansed from evil spirits frequently both believe [in Christ], and join themselves to the Church."

Those who do so, however, are prohibited from public meetings whereby demons are called to give their names or otherwise manifest under direct questioning. That is left for the exorcist -- as indicated by Cardinal Joseph Ratzinger (now Pope Benedict XVI) in a 1984 letter to local ordinaries.

The Church's inspiration has left us with powerful tools of deliverance, notes Lozano, prime among them the Eucharist and Confession.

Meanwhile, the Rite of Exorcism -- as well as the Sign of the Cross -- have proven to be tremendously powerful against evil, which is most effectively attacked when the laity are led and the demonized delivered by consecrated clergy (wearing their stoles).

Once the entrance for a spirit has been found, repentance, forgiveness, and renunciation break its holds.

"The sacraments are the greatest gifts the Catholic has to overcome sin and yield to God's Love," writes the author. "The sacrament of Reconciliation, in particular, is our opportunity to make true repentance. This repentance is the beginning of our deliverance from our own sinful patterns and from the influence of the enemy."