Is all the music from the Sixties and Seventies and Eighties and now this millennium -- adding perhaps also the bobbysocking Fifties -- really so bad?

It's difficult to judge. By the fruits we know it. There seemed to be some awfully beautiful music (think: Hey Jude, or Bridge Over Troubled Waters, or Let It Be).

But for much of the time, there also seemed to be the influence of a dark spirit.

Years ago, a Catholic newspaper quoted the Pope’s doctrinal czar, Cardinal Joseph Ratzinger, as giving his perception of modern music (in a 1986 article for L’Osservatore Romano) when he wrote that rock "has become the decisive vehicle of a counter-religion.  ... Rock music is completely antithetical to the Christian concept of redemption and freedom, indeed its exact opposite."

Added then-Cardinal Ratzinger (who of course we now know as Benedict XVI), rock music "is a basic way to express passions which, in big audiences, may assume characteristics of cult or even adoration, contrary to Christianism."

That's serious language -- and goes beyond even what we have ascribed in our continuing series on the secret origin of rock 'n' roll [see previous article].

No question about one thing: certain bands reeked of carnality.

"Throughout the Classical Age of Rock, certain genres and subgenres would evolve into virtual cults, many of which bear a startling resemblance to the cults of the ancient gods," writes Christopher Knowles in The Secret History of Rock 'n' Roll.

Take, for instance, the Rolling Stones, who, he writes, "fell under the spell of Kenneth Anger, who introduced the works of [an Englishman known as "The Beast"] and Church of Satan founder Anton LaVey. Mick Jagger reportedly wrote 'Sympathy for the Devil' under Anger's influence and recorded a startlingly avant-garde soundtrack for his 1969 film Invocation of My Demon Brother, using cutting-edge synthesizer equipment."

The devil would catch up with this band by the end of that year, notes Knowles; in 1969 a band member who recently left was murdered by a handyman, while during a concert at Altamont Raceway in California the Hell's Angels famously killed a disgruntled fan at a Stones concert.

They were originally known as The Warlocks.

Their leader -- who also died very young (and mysteriously) -- claimed to have been possessed by an Indian spirit as a boy and as a young man married a practicing witch.

The list of rock bands and their links to the occult are too numerous to detail or even synopsize. 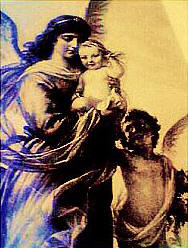 As pointed out by an Orthodox bishop, a few other examples include: "Stevie Nicks of Fleetwood Mac has several times dedicated their concerts to the witches of the world. An album of the rock group Venom entitled, 'Welcome to Hell,' contains the following words on the back cover: 'we are possessed by all that is evil. The death of your God we demand: we spit at the virgin you worship, and sit at the Lord Satan's left hand.' The 'Rune' album of Led Zeppelin displays on the cover the famous black occultist Aleister Crowley. Led Zeppelin's Jimmy Page, a self-confessed Satanist, bought Crowley's old mansion. John Bonham, a drummer for the band, died in the house in 1980; Robert Plant allegedly split the group up after the death and blamed Page's obsession with the occult for his death."

You better believe it.

Page is the one who wrote "Stairway to Heaven," one of the most famous rock songs of all time (voted number three by VH1) and the single most requested song on FM stations in the 1970s. The musician described a process whereby he and his co-writer had basically "channeled" this song.

Stairway to "heaven" or a ladder to hell?

"I was holding a paper and pencil, and for some reason, I was in a very bad mood. Then all of a sudden my hand was writing out words," recalled that song writer. "'There's a lady who's sure, all that glitters is gold, and she's buying a stairway to heaven.' I just sat there and looked at the words and then I almost leaped out of my seat'" (this from Stephen Davis, Hammer of the Gods, p. 164).

The writer, it seems, "often remarked that he could feel his pen being pushed by some higher authority" (p. 262).

The infiltration -- or inspiration -- appears to have been pervasive.

Adds Knowles about this group, "They also understood the effect that endless repetition of a powerful riff had on a listener's subconscious, as it did with voodoo, Sufism, and the ancient Mysteries. Sticking close to this surefire formula, Led Zeppelin released a remarkable strong of smash-hit albums."

We must be careful about "inspiration." We certainly should never channel. And we should be careful about the radio and iPods and the internet, and certainly VH1 and MTV. For as it notes in Scripture, Satan, among other titles, is "prince of the power of the air" (Ephesians 2:2).