From The Mail: What Are We To Make Of Alleged 'Signs' In The Sky, Sun, Clouds? 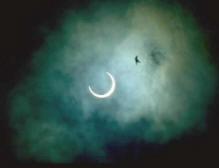 What are we to make of all the reports about strange happenings in the sky? There are the "sun miracles" -- everywhere. There are beams coming down from it. There are gyrations. There are reports of the sky suddenly going dark. There are strange lights. As always, but with greater frequency, there are alleged images in clouds.

Or is it something that we are seeing even in our modern "science-knows-it-all-and-there-are-no-miracles" time?

I find it impossible to believe that Christ spoke anything but the absolute truth and in Luke 21 He said that there would be "great signs from Heaven" heralding His return. No one knows when He will return, but if signs will precede that, is it not logical that they will precede other major spiritual intersections?

This week there is a total eclipse of the moon. There are always eclipses. They are periodic. They are a product of cycles. But as with storms and quakes and other acts of nature, God can manipulate such cycles to send a message (as we saw with the recent hurricanes).

Just because science can anticipate a storm doesn't take away its spiritual component.

As for clouds: sometimes, one can see what one wants. I suppose one can imagine everything in the sky from cartoon characters to holy figures. There's even a name for this: "pareidolia," which skeptics describe as a type of "illusion" or "misperception" involving a vague or obscure stimulus perceived as something distinct, depending on preconceptions.

I have here before me from Livermore, California, the rendition of one such image that shows the face of a devilish creature with a pitch fork above. That involved rather wispy clouds, but some images strain scientific explanation. There are clouds that appear as identical bookends. There are swords. There are rather detailed "angels." There was the report of clouds that formed two towers the night of September 10, 2001.

"About two weeks ago, when I was moving from my farm, I looked up and a saw a very large -- miles across -- hand of God with the index finger pointing due west toward Seattle and the three other fingers curled as they would be when you point," writes Greg Miller of Spokane more recently -- wondering what that pointed "finger" may or may not portend.

"I live about eight miles from the ocean in Monterey Bay," writes a viewer from California. "Tonight, at sunset, I was driving west and watching the beautiful pink sky. I remarked to myself that the color looked different and made everything around look different. It was almost as if I was looking through rose colored glasses. As the road turned, I began driving more southwest than just west. I saw some gray streaks in the sky that looked an awful lot like [contrails]. I drove a little more, did some errands and got back in the car. The gray chem-trail-looking streaks were gone... in their place was black... just black! A cold shiver of fear made me jump. The black did not look like a cloud. It looked like part of our sky had just winked out and in its place was nothing but black!"

On the other hand, others see rivers of light -- a term used by mystic Maria Esperanza to describe God's grace in 2004. It is also a phrase used by the Pope in initiating the Year of the Eucharist.

Writes Nancy Balick: "One Tuesday afternoon in August this year (it may have been around when Maria Esperanza died) my husband and I noticed that there was an unusual glow outside.

"We live near Baltimore. It was very, very strange. I went outside to see what was happening with the sun. There were some clouds, but not over the sun. Yet still everywhere we looked it was almost 'golden.' It's like when a photographer puts a yellow filter over the lens on a camera making everything you see have a yellow tint to it. It was just like that, only everywhere.

"The next day I looked on your site and there were stories of the sun 'blinking' and doing all kinds of strange things in other parts of the country.  I remember that it was right around the time of Maria Esperanza's death, and later I thought maybe that had something to do with it.  Shortly after, the hurricanes came to Florida (where I'm from).

"Well yesterday morning, October 13, it happened again.  I looked outside and everything was aglow again.  I didn't realize that it was October 13th (anniversary of the famous Fatima sun miracle)."

It was also the week that initiated the Eucharistic year.

Coincidence? Reading too much into things? Or are some perceiving signs of the times?

"The prophetic word is a warning or a consolation, or both together," Cardinal Joseph Ratzinger wrote four years ago, upon releasing the Third Secret. "In this sense there is a link between the charism of prophecy and the category of 'the signs of the times,' which Vatican II brought to light anew: 'You know how to interpret the appearance of earth and sky; why then do you not know how to interpret the present time?' (Lk 12:56). In this saying of Jesus, the 'signs of the times' must be understood as the path He was taking, indeed it must be understood as Jesus himself. To interpret the signs of the times in the light of faith means to recognize the presence of Christ in every age. In the private revelations approved by the Church—and therefore also in Fatima—this is the point: they help us to understand the signs of the times and to respond to them rightly in faith."

Continued the high-ranking Vatican official: "To understand the signs of the times means to accept the urgency of penance – of conversion – of faith. This is the correct response to this moment of history, characterized by the grave perils outlined in the images that follow."

Then there's the reputed vision George Washington had at Valley Forge: "And again I heard the mysterious voice saying: ‘Son of the Republic, look and learn.’ At this the dark, shadowy angel placed a trumpet to his mouth, and blew three distinct blasts, and taking water from the ocean, he sprinkled it upon Europe, Asia and Africa. Then my eyes beheld a fearful scene: from each of these countries arose thick, black clouds that were soon joined into one...

‘Son of the Republic, look and learn.’"