FORGIVENESS IS ONE THING, BUT THERE IS ALSO THE MATTER, IT SEEMS, OF PURGATORY -- AND 'EXPIATION'

It's that time of the year when purgatory is on our minds in a special way -- this season of Confession, of penance, of donning the sackcloth -- and every now and then we are drawn to a rather amazing little book about the afterlife.

It's an interview by a religious named Sister Emmanuel with a reputed (and now-deceased) mystic named Maria Simma of Sonntag in the Vorarlberg mountains of Austria who asserted that she was in contact with and interceded for purgatory souls.

There are certainly some very interesting observations.

It was Simma's view, for example, that to gain the full effect of indulgences, one had to clear the soul of all materialism. 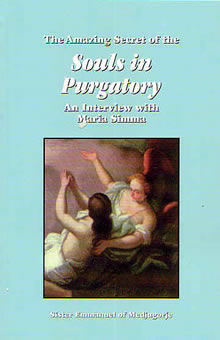 "Contrition is very important," Simma had stated. "The sins are forgiven, in any case, but there remain the consequences of sins. If one wishes to receive a full indulgence at the moment of death -- that means going straight to Heaven -- the soul has to be free from all attachment." The book is The Amazing Secrets of the Souls in Purgatory, highly popular for many years now, and it brings up the issue of forgiveness (absolution) versus "expiation."

When we are forgiven, she noted, the sin is released; we can no longer suffer condemnation for it. That much is cleared. But according to the extensive teachings of the Church, including in the deposits of mystical theology, one may still have to go through expiation: suffering and/or sacrifice to purify the soul of what it picked up committing the sin or imperfection.

In short, expiation means the act of making "atonement" and atonement means "reparation" -- not just confessing, in some cases, but "paying" for damages.

When not done here, expiation is accomplished in purgatory.

None of us can be sure just where our own souls will go (purgatory or Heaven; believers in Jesus, who stay clear of grave sin, have no worries of hell) -- let alone where others will go.

Maria related the account of a soul that had been saved from hell because at the moment of death (she had an accident) she said to God: "You are right to take my life, because in this way I will no longer be able to offend You." That, she claimed -- a moment of ultimate humility and contrition -- had mitigated the woman's sins (probably sending her to purgatory to complete the contrition).

"Sins against charity, against love of one's neighbor, hardness of heart, hostility, calumny -- all these things," she said,  most lead to purgatory.

At the moment of death, said the mystic, God gives souls a chance to turn towards Him, "several minutes to each one, in order to regret his sins and to decide: I accept or I do not accept to go see God.

"There, we will see a film of our lives."

The best way to prepare?

"To abandon oneself totally to the Lord. Offer all sufferings. Be completely happy in God."

[resources: The Amazing Secrets of the Souls in Purgatory and The Unpublished Manuscript on Purgatory]