Notes from all over:

From The Church To Natural Events, It Seems Like There's Something In The Wind 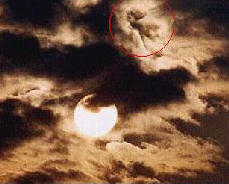 There seems to be something in the wind. I don't pretend to know precisely what it is. There is strong breeze of some sort, and a breeze can grow into a gale.

It is Lent and it is time to pray for deliverance. Also, self-illumination. This is a good thing to pray about now. For during Lent, God is close. We are able to know the truth about ourselves. It does not have to be a mega-event. We should ask for individual illumination.

It is really the important part of the message. It is also a prayer: "Lord, show us who we really are. Lord, show us what we need to do. Lord, prepare us always, and at all levels."

We are not alone in this sense of more that is about to happen. There has been a lull, as there always has been a lull. Such has been with us since Katrina. But there are matters afoot, and there continue to be unusual confluences of tornadoes and floods and fires.

When we say "prepare," we are only listening to a U.S. Secretary of Health and Human Services, who to the shock of many came out "in a remarkable speech over the weekend," said ABC News, and "recommended that Americans start storing canned tuna and powdered milk under their beds as the prospect of a deadly bird flu outbreak approaches the United States."

This is a Cabinet-level official who is in charge of the Centers for Disease Control (among other agencies), not a man with a placard proclaiming the end of the world in Times Square. And he is not saying that the world is about to end. But obviously, he too senses something. With prayer and penance -- especially now -- we can lessen whatever it is that may come.

Six years ago, touring the Centers for Disease Control in Atlanta, I remember watching technicians in their protective gear handling trays of chicken eggs and drawing samples out with pipettes in a rush (even back then) to find a vaccine for avian influenza. It is one of many different scenarios.

Whatever may occur, it never hurts to have a little stockpile of ibuprofen, alcohol-based hand cleaners, anti-bacterial soap, glucose pills, water, canned soups, a small radio, Immodium, batteries, candles, and other such things. Mostly, prepare spiritually.

In that way, there is no fear.

It is a "word" we have often shared: prepare. There is a swell in the spiritual sea. We note much transpiring in a way that it has not previously transpired. We are in a time when other "high-point events" like Katrina or the Asian tsunami seem inevitable.

"Now I invite you and all your brothers and sisters to take up your mission that I ask of each and every one of you in these exciting times in the history of humanity," one Catholic who "died" and came back, Ned Dougherty, formerly a famous New York nightclub owner, claims Jesus told him recently.

"Many of you are becoming increasingly more aware of My Presence among you. The veil is being lifted for those who now choose to follow me for there is much work to be done, and I want all of you to proceed forward with the fervor and love of the Father knowing that I am with you ever more closely on your journey in these times. Now is the time for all of you to increase your commitment to a life of prayer and humility. Now is the time for you to recognize that many of your brothers and sisters have fallen by the wayside. Many of them are hurting and in despair because they do not know of my Love for them."

What do we make of this?

"As you are walking with me now in the Garden of Nazareth, I am calling upon all of your brothers and sisters to also take this walk with me," Dougherty feels he was told. "There is no exclusion among the souls on the face of the earth to this invitation."

We attempt to discern such prophetic "words" as we note that something is afoot and that it may soon flame at us. Whatever the future holds, Lent is always a time of preparation. What an exciting opportunity -- and what an exciting time to carry a cross behind Jesus! We can quibble over authenticity, but we can't quibble over the fact that nature (as one conservative priest recently put it) is the "first Bible," and nature is speaking.

So many things occurring in so many arenas. There is the DaVinci Code -- which is breaking upon the scene, and which, to their great credit, the bishops are fighting aggressively. There are all these swerves too when it comes to abortion and genetically-modified crops and the outcome of a war that John Paul II and Venezuelan mystic Maria Esperanza both predicted would spawn "defeat" and "tragedy."

We don't do politics here but we are concerned about globalization and the course of this country, as well as the rest of the world, which in so many ways is haywire.

Oh, the times we are in! In South Dakota, where there is a new law to ban abortion (initiated by a politician who woke up with the idea at the strange hour of three a.m.), rare white buffaloes have been born -- a symbol, claim the Indians, of purification.

I'm not much on ancient Indian mysticism (which like most ancient religions was largely pagan), but I respect many aspects of Native American sensitivity and there is little question that the earth -- as Esperanza also said -- is out of balance.

In our Church, there are also swerves when it comes to keeping the faith. Open warfare appears to be breaking out between conservatives and liberals from Minnesota to California. In Rochester, New York, is a report that a woman wearing "priestly garb" gave a "talk" during Mass recently (followed by the regular homily given by the priest).

If you see what may be abuses, report them to the papal nuncio. The papal nuncio (also known as an Apostolic Nunciature) is a permanent diplomatic representative of the Holy See to a state, having ambassadorial rank, usually with the ecclesiastical rank of titular bishop. In addition, the Nuncio serves as the liaison between the Holy See and the Church in that particular nation, supervising the diocesan episcopate (usually a national conference of bishops) and often has an important role in the selection of bishops. Send him your concerns [U.S. Apostolic Nunciature, 3339 Massachusetts Ave. N.W., Washington DC 20008].

We ask prayers too for certain Jesuits who are promoting "a Brokeback Lent" -- reference to a movie that normalizes homosexuality. At the same time that we love those with whom we disagree, let us pray that the Vatican is made aware of this. No Catholic institution should back that movie.

The point: we are seeing much turmoil. We get many alleged messages. We see endless manifestations. Let us discern it all at a time when -- even in secular realms -- there is a sense of coming events.