Spiritual Beings Are All Around Us To Help, Especially When We Don't Know It

We fail to realize how to ask for the help of angels. There are many of them and often we would do well to ask for them by a specific task. Remarkably, such often works wonders.

The task can be tiny, or impossibly large. An angel can watch over a city, a state, a nation. Such a spirit can watch your home when you're away. An angel can stand guard by a tree that may be in danger of falling, or deflect a storm, be it in the Will of God. There can be an angel in the whirlwind! There are folks who call on angels for the seemingly innocuous: to help them find parking spaces, reporting remarkable results.

Angels actually want us to go to them, and we do so all too infrequently. This is not to say that angels are our servants and have nothing better to do.

But they are all around us and delight in coming to our aid.

The more we call on them, the stronger and swifter seems their action.

When we die, we'll be astonished at how many times in life we were assisted by angels -- how many times they may even have saved our lives -- and at how they crossed our paths as mysterious strangers -- in human form and never recognized for who and what they were. Probably the most intriguing Scripture reference to angels from a human perspective is the one that says, "Be not forgetful to entertain strangers, for thereby some have entertained angels unawares." (Hebrews 13:2).

Meditate on that -- and your life -- for a moment.

We know of a former atheist and college professor named Dr. Howard Storm (now a missionary and builder of Catholic churches) who was saved as he exited a highway ramp in Cincinnati by a voice that suddenly shouted to him (inside his otherwise empty car) "Stop!"

He slammed on the brakes even though he didn't see any reason to slam on the brakes and just then a pickup truck came flying at fifty or sixty through a red light.

He would have been hit on the driver's side.

Should we call on them by name?

The Church teaches caution. The names we call on are those in the Bible -- Michael, Raphael, and Gabriel. We call on our guardians. We call on Mary as the Queen of Angels. We call on God to send specific angels at specific times in life: angels to help us with problems at home, at work, with deliverance, with healing, with financial problems, with protection, with children, with driving, with death. At Fatima, there was the Angel of Peace.

We should know that there are millions. 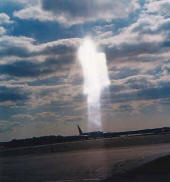 Depending on what is occurring in your life, God may send extra ones. Tradition has it that priests have several angels (and are hounded by extra demons). We can only imagine that bishops have yet more. When Pope John Paul II arrived on one trip to the U.S. at the airport in Baltimore International Airport, a photograph of his plane on the tarmac showed a "reflection" that resembled a towering angel over the aircraft!

The point: we are not alone. The supernatural swirls around us. When we tap into it, the result can be miraculous.

Said one woman who was dying of Hodgkin's lymphoma -- whose organs were shutting down, and who was given just 36 hours to live:

"I was drifting in and out of consciousness during this time and I could feel my spirit actually leaving my body. I saw and heard the conversations between my husband and the doctors taking place outside my room, about forty feet away and down a hallway. I was later able to verify this conversation to my shocked husband. Then I actually crossed over to another dimension where I was engulfed in a total feeling of love. I also experienced extreme clarity of why I had the cancer, why I had come into this life in the first place, what role everyone in my family played in my life in the grand scheme of things, and generally how life works.

"The clarity and understanding I obtained in this state is almost indescribable. Words seem to limit the experience -- I was at a place where I understood how much more there is than what we are able to conceive in our three-dimensional world. I realized what a gift life is and that I was surrounded by loving spiritual beings who were always around me, even when I did not know it."

[resources: Guardian Angels and In the Arms of Angels, highly recommended]

The Imitation of Mary, by Abbe Alexander de Rouville. No sooner had the incomparable Imitation of Christ appeared than the faithful began to spontaneously wish for an imitation of Our Lady, and finally, in 1768, a monk pulled together a little powerhouse of meditation on the different mysteries and circumstances of her life, from the Immaculate Conception to her Assumption into Heaven! Click here