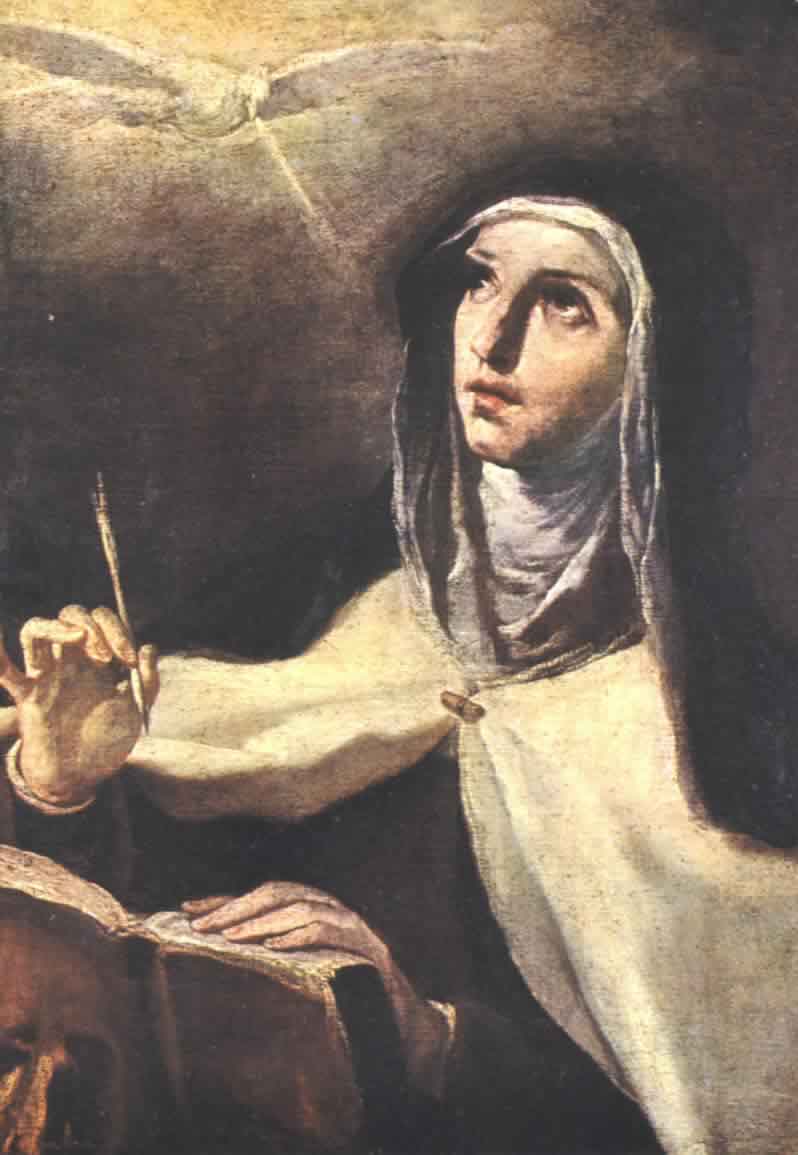 Doctor of the Church, mystic, founder of reformed Carmelite convents, and canonized only 46 years after her death, St. Teresa was born in Avila, Spain on March 28, 1515.

Made in poverty, in suffering, in face of endless difficulties, but supported always by the Mighty Hand of God, is the way she summed up the story of her foundations.

God visited her in visions and revelations, including assisting the souls in purgatory.

Take the example of Don Bernardine of De Mendoza, who was brother of the Bishop of Avila and -- compelled by his love for the Blessed Virgin -- offered St. Teresa one of his houses (near a place called Valadolid) for a Carmelite foundation.

Two months after his offer was accepted, Don Bernardine suddenly fell ill, could no longer speak, and was thus unable to make his confession (but gave visible proof of his sincere contrition). He died far from where St. Teresa was at the time.

"My daughter, his salvation has been in great danger, but I have had compassion on him, and have shown him mercy, in consideration of the service which he has rendered to My Mother, in giving that house for the establishment of a monastery of her order," Our Lord allegedly told St. Teresa. "Nevertheless, he will not leave purgatory until the first Mass shall have been said in the new convent."

What a story this is!

From that day, said Teresa, the grievous sufferings of Bernardine's soul were so present to her that in spite of the great desire to build a foundation in Toledo, she pressed forward to complete the foundation in Valadolid first.

She arrived at Valadolid on the Feast of St. Lawrence.

Arrangements were made, and the Holy Sacrifice of the Mass was offered.

And at the moment of Communion, as the priest advanced toward her holding the ciborium and St. Teresa received the Sacred Host, Bernardine appeared to her with a shining countenance.

As she herself wrote, he "thanked me and I saw him ascend immediately to Heaven. Great is the mercy of Our Lord, and wonderfully acceptable is any service rendered to His Blessed Mother." We can see that Our Savior takes into account the services rendered to his saints and above all, to His Mother, when the soul faces Him at the particular judgment.

The duration and the intensity of its purgatory is affected. Thanks to the intercession of the Virgin Mary, his purgatory was very short!

Fr. Lamy, once of the Diocese of the Cure d'Ars, writes: "The Holy Virgin does not love purgatory. It is a place of sorrow. I love to pray for the souls in purgatory, and the most Holy Virgin chides me because I do not ask sufficiently for them. She said:  I await graces for these souls -- the graces which I did not dare to ask.”

Of all the good works that we can offer for the benefit of the souls in purgatory, the most excellent and the most profitable are the Holy Sacrifice of the Mass and Holy Communion. The Holy Eucharist is the highest expression of the union of charity because it is the sacrament of union within the Church and Our Lord is present therein.

Take time to remember to refresh our beloved dead with a Holy Mass.

Offer a Novena of Masses for your family tree including all ancestors back to Adam and Eve.  Include those not yet conceived or born.  Associates or friends who have left either a negative or positive impact on our lives. Those who have injured us or given a bad example. Remember your teachers, pastors, supervisors, mayors and governors.

Those souls whose happiness has been hastened by our Masses, will never forget us; they will interest themselves in our welfare and families. They shield their friends from dangers and protect them from evils that threaten them. Sometimes it is a sudden inspiration to change our plans, to give up some undertaking in which our lives would have been in danger.

They show that blessings and consolations of all kinds are promised in return for generous devotion to the departed.

Happy and blessed are they who pray for the dead at all seasons of the year.

On earth they will have joy, confidence, and peace, and in heaven rest, happiness, and an eternal reward.