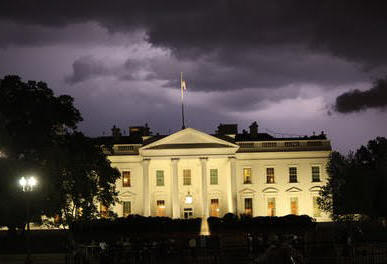 When a storm is captured in eruption right over the White House, is it a political commentary, a commentary on the nation as a whole (with the International Monetary Fund predicting the decline of the U.S., domestic socioeconomic upheaval, and China ready to shed U.S. dollar reserves), or just part of the storm system?

It is perhaps peculiar that the Midwest suffers so much, and one is tempted to indicate St. Louis as home to a corporation that is leading the way toward genetically engineering crops (which are now spreading across the Midwest). Nature in upheaval (or rebellion?).

"From 1992 to 2012, great natural disasters will happen, such as earthquakes, floods, tidal waves, and weather changes," a woman once stated. Her name was Cassandra Musgrove and she suffered a clinical "death" during which she allegedly received this prophetic revelation (in the 1980s). "Earthquakes will strike the eastern coast of the U.S.. There will be three days of darkness from the explosion of volcanoes. Ultimately, these natural disasters will stop. Humanity will always have the Light."

"There will be resultant disturbances in weather patterns and food supplies," wrote a researcher in this realm long before the popular notion of climate upheaval. "The world economic system will collapse, and the possibility of nuclear war or accident is very great (respondents are not agreed on whether a nuclear catastrophe will occur). All of these events are transitional rather than ultimate, however, and they will be followed by a new era in human history, marked by brotherhood, universal love, and world peace. Though many would die, the earth will live."

We struggle to discern. It is something -- that Jesus is going to show Himself -- which Saint Faustina also predicted. And it was a well-known stigmatic from Germany who saw the U.S. brought to its knees by "natural disasters," while others saw a takeover by globalized forces, and all these prophecies have to be taken with a measure of salt, for rare is the specific prediction (especially if it has a time table) that has met with fulfillment.

But some of these seem to have. Many are those who have related a tumultuous coming period that coincides, at least in its initiation, with what we call the "1990 prophecy." (Skeptics are invited to read Tower of Light about that prophecy, and compare what it foresaw with current events)

We must beware, of course, of the New Age, which infiltrates some of these visions. We note them with "earth-change" lingo. But that the earth is changing -- in many ways -- is apparent around us. In the Arctic, ice indeed is melting. The end of the world? Despite those who try to lump all this with more radical apocalypticism, very few have said that. Our exciting, challenging times!

Claimed a well-known psychiatrist who died and allegedly saw Jesus: "He opened a corridor through time, which showed me increasing natural disasters. There were more and more hurricanes and floods occurring over different areas of our planet. The earthquakes and volcanoes were increasing. We were becoming more and more selfish and self-righteous. Families were splitting, governments were breaking apart because people were thinking only of themselves. I saw armies marching on the United States from the south and explosives occurring over the entire world that were of a magnitude beyond my capacity to imagine. I realized if they continued, human life as we have known it could not continue to exist."

And the night-time visions?

"I had a dream of Our Lord standing on the horizon with His hands outstretched toward us," a woman from Buffalo named Margaret Peters wrote us. "He was wearing a white robe with a red sash. He was sad and yet loving. People did not seem to see Him or care, they just went about their business. I couldn’t believe how they ignored Him standing there. Then I felt a wave of heat shoot through me almost like when you open a hot oven door and you feel the heat. My husband, children, and I were safe as we prayed. We tried to help the people but there was nothing we could do. I had this dream in 1989 and remember it like it was yesterday. It shook me to the core."

We certainly seem to get a certain essence from these revelations -- in fact, very probably we do, if we "have ears." As the addendum to the "1990 prophecy" said, the major event to come, however -- the climax, whenever that occurs -- "will surprise everyone who has offered a prognostication.”

[adapted from Tower of Light; see also Return from Tomorrow]

Let's just look closer at what some of these near-death experiencers, whom we have visited previously, have said, in the wake of recent events.