IS IT GOD'S PLAN? DRAMA UNDERFOOT AS U.S. FACES PROSPECT OF CHANGE IN STATUS

Many are those who anxiously await the demise of the United States. Such emotions come partly from jealousy: no nation has ever guided the course of so many humans, and no nation has ever been so blessed, at least in material and intellectual resources.

Yet the question of the hour is whether America is losing that blessing.

As this was going to press, a Catholic website carried a similar article -- with a headline that said, "Why God Can't Bless America."

It was Archbishop Fulton Sheen who said that abortion would lead to "midnight" on the doomsday clock. "That is nuclear war, in which there will be a total disregard for life."

Many are those who believe that America's allowance of abortion, drugs, promiscuity, profane entertainment, embryonic stem-cell research, environmental degradation, and other instances of darkness has reached such a point that we no longer bear the Name and that God will thus remove His special anointing.

Such may -- or may not -- be related to the recent economic downturn. More important is moral loss -- the abandonment of America's signature Christianity. Does the nation -- do we, to quote Jeremiah -- still "bear the Name of the Lord"?

Don't count America out yet! She is a great nation. Look at all the good she has done. But she is in need of urgent intercession, as they are doing in places like the Philippines (led by bishops). If not for that, disintegration will arrive -- not all of a sudden, perhaps, but in stages.

"The dollar is plunging. Detroit's car dominance is history. London claims to be out-financing Wall Street. So maybe it's time to ask whether the era of U.S. dominance is over for good," said Microsoft's news site.

Is the stock market simply gyrating with the ups and downs of the mortgage and real estate markets? Or is something longer-term in the wind?

One well-known priest even wrote a diatribe entitled: "The Impending Suicide of a Once-Great Nation." This is of course premature. There will be ups and downs. One day up, the next down. 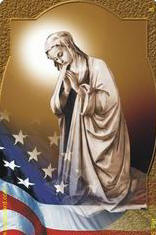 But it was a U.S. professor named Howard Storm who -- during a famous near-death episode (publicized even on such shows as Today) -- claimed he was told by angels that if the U.S. did not spread its blessings in a more equitable way -- if it did not stop hoarding money, and if it did not begin to reach out far more to the impoverished -- it would be reduced to a third world nation and that another nation or set of nations would take its place in doing what was planned for it: spreading the goodness and Gospel of Christ.

Many have been the inventions. But have they been generously dispensed, are they all consonant with God's Creation, and is America the Christian tool planned by God -- or has it exported too much in the way of Hollywood and carnality and violence to be labeled such?

We can debate all these points, while wondering if there already are rumblings. We all see what is occurring in the economy. America is no longer the dominant force it once was. The euro is now favored over the dollar. Nations that used to fear every nudge by the U.S. are now gouging us. The federal budget deficit for this year is nearly $500 billion, not to mention the trillions in past debts that must one day be paid.

Can they ever? What about the flood of retirees the nation can soon expect?

Internally, there is division, and the coming election will be fascinating with unknown results. If, for example, Barack Obama becomes president, the question is whether that will draw white and blacks closer together or harden the separatism.

Might America one day splinter? Entire areas of the nation are taking on a wholly new cultural flavor, and there is even serious talk of a portion of the Southwest returning one day to Mexico.

And what about its standing in the world? An African Cardinal, Christian Wiyghan Tumi, Archbishop of Douala, Cameroon, recently said the West is afraid of population growth in third-world countries. "In our Third World we have families with 12, 13, 14, 15 children and these are young men and women growing up," he told a pro-life website. "So, I have the impression that the West is panicking because their population is becoming old." The reason for that panic, added the Cardinal, is that "they are afraid that other countries might invade the West and reduce their standard of living."

What about enclaves? Already, there are signs that people are beginning to move to locations based on religious leanings, ethnicity, or politics. Will America become a federation of regions?

One former president recently observed that it is a polarized nation. Political differences from county to county are increasing. Folks are "hunkering down." He cited statistics showing that in the 1976 presidential election, only twenty percent of the nation's counties voted for Jimmy Carter or President Ford by more than a twenty-percent margin. By contrast, 48 percent of the nation's counties voted for John Kerry or President Bush by more than twenty points in 2004. "We were sorting ourselves out by choosing to live with people that we agree with," he fretted.

Will this hold true also for religions?

Externally, there is the rise of China.

There is the re-constitution of the Russian power center.

There is the European Union, which seeks a new world order with unknown consequences.

Spiritually and materially, there are indications that -- indeed -- another nation may take our place. It is interesting how Poland is now producing so many priests that it is exporting them (as sort of the new Ireland). At the same time that vocations flourish, Poland's economy is booming. There are the Philippines. Many struggles here, but also a new anointing.

It is rising as an economic and intellectual colossal and despite its immersion in Hinduism and Buddhism has such a galvanized Catholic minority that it too is exporting clerics to the priest-challenged West!

Will the new powerhouse be India?

Might China take a Christian turn? Or will Africa coalesce? (It is the leading region for growth in Catholicism)

Stay tuned. The one thing we can know:

The U.S. is at a crossroads. So is the world. America is hardly the only country with faults. It is a great nation that has done much good and deserves tremendous love. But it may well have peaked in the years of Ronald Reagan (and in another fashion, in the early Sixties, before it was invaded -- and taken over -- by consumerism and sexual secularism).

"Forbes magazine's annual list of the world's richest people is eagerly anticipated as a barometer of wealth and power," said Microsoft. "And each year the mighty U.S., whose economy is often described as the envy of the world, has dominated the rankings. Until now, that is. In its most recent survey, the Forbes billionaire list changed dramatically: The United States made only four appearances in the top twenty, compared with ten names two years ago. India, by contrast, posted an astonishing four in the top ten, twice as many as the U.S. While America still leads the overall list, Russia, the new nation of raging capitalism, ranked second. Its 87 billionaires pushed aside Germany, the former runner-up."

Of course, money is a poor standard. But it hints at world influence. Have we squandered an anointing?

A time has come to take a new perspective on the technological landscape (discerning if it was all in God's Plan) and also to admit that some of those who await the demise of the U.S. may do so out of disappointment with us: we have disappointed. Many times, we have been arrogant.

At the same time, let the other nations take stock of themselves.

How many, in the modern world -- how many who carp at the U.S. -- have the same attendance at Sunday Mass or services and how many would like to live in their simplicity and holiness without just a couple of those inventions? How many would have liked to have lived in Europe had America not intervened against the Nazis?

The U.S. is not dead. Not yet. Don't be too quick to count her out. No nation has ever done many of the things the U.S. has done. She is a great one. She still stands tallest.

But she is in need of another historic revolution, this time, truly -- urgently -- a spiritual one.