New Age or the invisible force around us?

What is it about water? The "living waters." The liquid of life.

The most pervasive single compound in and around us harbors many mysteries. Christ walked on it. Christ made wine from it. Christ was baptized with it -- as are we all. Might it be a portal to a spiritual dimension?

We know the power of Holy Water and now a researcher from Japan, Dr. Masaru Emoto, is presenting what he thinks is evidence that water not only has a spiritual dimension but reflects the world -- and spiritual forces -- around it.

An expert in alternative medicine, Dr. Emoto says that for years he has photographed water crystals and finds that they react to prayer, music, and even the ambience created by words. Fringe science or a legitimate avenue for new study?

"Crystals emerge for only twenty or thirty seconds as the temperature rises and the ice starts to melt," Dr. Emoto explains (in book called The Hidden Messages in Water). "This short window of time gives us a glimpse into a world that is indeed magical."

Dr. Emoto claims to have seen astounding results -- crystals that are beautifully formed when they have been in the presence of classical music -- or those praying [as at top, left] -- and malformed or unformed structures when tension was expressed in the room or there was heavy-metal music!

Is it New Age or proof that words and thoughts really do affect what is around us?

"I put fifty different types of water in fifty different Petri dishes I then freeze the dishes at minus-four Fahrenheit for three hours in a freezer," he says. "The result is that surface tensions forms drops of ice in the dishes about one millimeter across. The crystal appears when you shine a light on the crown of the drop of ice."

And therein came the alleged results.

Emoto -- who himself describes the experiments as seemingly "off-the-wall" -- claims that Beethoven's Pastoral Symphony resulted in "beautiful and well-formed crystals" and that the same was true of Mozart -- while rock jangled water as much as it jangles our ears.

All matter, argues Emoto, is energy vibrating at the atomic level. It is at that threshold that there is the spiritual dimension, he asserts. Does our environment affect us far beyond the physical?

Might it also lend insight into how allegedly miraculous images form in ordinary objects?

The researcher asserts that hundreds have replicated his experiments and that the spirit behind positive words -- and gratitude -- evoke the most beautiful crystals. Meanwhile, physical factors such as pollution affect the water dramatically. Unformed or misshapen crystals were noted when water was exposed to cell phones, television, certain computer screens, and microwaves, he reports. Malformations were especially prominent in water that contained the toxic compound dioxin. The researcher claims that even small amounts of  chlorine destroy the structures.

"The water of Tokyo was a disaster -- not a single complete crystal was formed," he writes. "However, within natural water, no matter where it came from -- natural springs, underground rivers, glaciers, and the upper reaches of rivers -- complete crystals formed."

"Learning about water is like an exploration to discover how the cosmos works, and the crystals revealed through water are like the portal of another dimension.

"And the more you understand water, the more difficult you will find it to deny the existence of a God."

At the left is a crystal from water taken at Lourdes. At right is one that formed as Gospel music was played. These beautiful, well-formed crystals are in stark contrast to those placed in the presence of hard rock music [below, left], or from municipal water systems [below, right, Venice].

"Perhaps it is possible that the miracle water of Lourdes, France, which is said to have healing powers, is filled with the feelings of appreciation of the Mother Mary," he says. "As a result, people who have been made ill by the vibrations of hate can be miraculously healed by drinking this Holy Water."

At Lourdes, one must add, the healing is through the intercession of the Blessed Mother. But we get the point: water from there is demonstrably extraordinary.

What might be seen in Holy Water -- or more dramatically, might there be the glimpse of eternity at some point during Consecration? Does this research lend new insight into the Catholic dogma of transubstantiation (at a molecular level)?

Or is it all so far out as to belie serious discussion? Again, New Age? Or is it that we know far less about what surrounds us than we like to think?

When water was exposed to words relating negativity -- such as "You fool!" or "You make me sick" -- the results were equally dramatic, Emoto says. When the word "angel" was introduced, the result was a vibrant and well-formed crystal while the name "Satan" produced a malformed crystal that looked like the eye of a reptile.

But reactions to words? Most powerful was the word, "Thank you" [left].

One problem: the researcher often relates to esoteric religions such as Buddhism, as well as Christianity. Is it also New Age?

Everything is linked, claims Dr. Emoto. And if nothing else, we think of the "living waters." Over and again, he found gratitude to be the emotion that evoked the most beautiful crystals.

"The Old Testament states, 'In the beginning there was the Word. This would mean that before the creation of the universe, there existed 'the Word.' My interpretation of this is that 'the Word' created human beings, and human beings then learned words from nature." 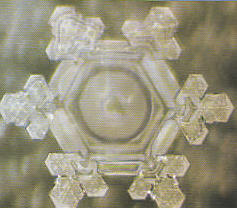 When people act out of their greed, they emit an energy that "serves to destroy the harmony within nature." Meanwhile, saying thank you has the opposite effect. At left is exposure to "thank you" in Japanese and at right in English. Gratitude resulted in the highest brilliance.

While some may say it is an interconnected "energy," others would argue that it is all coincidence. We submit it for your own purview. Whatever the case, energy is under the domain of the Holy Spirit and orchestrated by angels. When the word "angel" was spoken, we must note, there was a well-formed crystal, while the word "Satan" caused a malformed crystal to look like a reptilian or alien eye. When the words and feelings of "I will kill you" were conveyed, the water showed the silhouette of what looked like a violent man.

Let's say, at the least, that it didn't look like a snowflake.

"The vibration of good words has a positive effect on our world, whereas the vibration from negative words has the power to destroy," notes the scientist. Deliverance ministers tell us that negativity allows demons to attach to us. Does this research bear such out? And the concept of healing springs, of a 'green thumb," of positive thinking?

Emoto asserts that when exposed repeatedly to the words "thank you," rice fermented in a mellow fashion -- while rice exposed to the words "You fool" rotted and turned black.

Whether or not there is coincidence involved, that we can take as a little message.