FROM HORRID STREETS TO A MARIAN SHRINE, QUESTION IS WHY GOD ALLOWS DISASTERS

Why disaster? It's something we wonder about when we open up the morning mail and get notes like this, from a viewer named Pikchin:

"I live in Indonesia, a country that now is mourning due to disaster of tidal waves and earthquake happened in one of our islands : Sumatera. Dead toll may rise to 55,000 in Indonesia. The dead bodies litter in the island. Everywhere are dead bodies, now the condition is continuing to be made worst by disease and illness due to dead bodies that smell everywhere. Everybody is tired and desperate and this will make them easier to get sick. Please pray for my country, for the deceased and for those who lost their families. Many families are dead at once, some of them survive but they lost their other whole family. In this area majority are Muslim, but still they are our brothers and sisters in God's eyes. I am sure it won't stop us to pray for them... Pikchin"

We hear such reports and, yes, we wonder, but really we know. Life is a test. We all die. There are tragedies -- always have been. It is how we handle them that counts. There are victim-souls. Those who have near-death experiences assert that in horrid circumstances the Lord often takes the spirit from the body before a person's body is actually destroyed (or swept away), and so we see His mercy: it may look worse than it actually was for those who died, and whatever the case, they are now in His embrace. One mystic held the opinion that the poor and favored are often struck with disaster because God in His mercy was removing them from a world that was growing darker by the minute (while at the same time the evil receive their justice).

It is the build up of darkness, of sin, of negative forces, that may find its release in such disasters. While God often intervenes in such tragedies, He allows them to happen when they fit His mysterious Plan of redemption.

On the one hand, in Thailand, Father Pornchai Techapitaktham, pastor of Saint Agnes Church in Krabi, said that the thirty families of his parish are all safe because at the moment of the disaster they were attending Sunday Mass inland and were not in their homes closer to the coast. That was a miracle. So was that baby floating on a mattress. So was the family that found its way to safety holding onto a python.

But this tragedy, of course, soars above others. It is the greatest known tsunami death toll in history. It is also the most startling natural event in our lifetimes. It is prophetically linked. It means something. The Catholic prophets have long foreseen a build-up in natural gyrations. 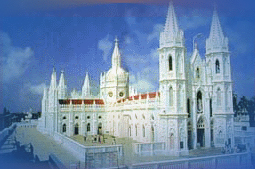 There is a purification in progress, and it rains on the good and evil alike. At the same time that churchgoers were saved in Thailand, about 400 Catholic pilgrims died at the Marian shrine of Velankanni, which faces the sea in the southern Tamil Nadu state. They were on the beachfront, reports a news service, when the tsunami hit. But added Bishop Devadass Ambrose of Thanjavur, who oversees the shrine, "There has been no casualty inside the basilica as the water did not enter the basilica compound."

About 2,000 people were attending Mass inside the basilica when the tidal wave hit, crushing the walls around the shrine.

Never question it. And never doubt anything that He allows. Though mysterious, His plan is perfect.