Fools For Christ: In A World Of 'Science,' Those Of Faith See Far Different Reality 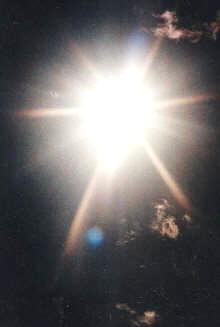 Many are those who have an interesting walk with the Lord. He takes us along paths that are unforgettable, and where the supernatural often seems normal.

Most of it occurs in our hearts -- in the way we feel, in the way we spiritually progress. What once was important is no longer so crucial and we look at the world through an entirely different lens.

At times, it would seem, we even look at the sun through a different lens [left, taken in Canada]. And images? There are images everywhere. We have been reporting on this. The explosion of them is without precedent, when tallied alongside exuding statues: so much so that even the staunchly secular New York Times recently ran an article based on them.

Scientists believe that they are the result only of the way our minds process patterns.

Even if a pattern isn't really a face, notes one neuroscientist (quoted in The Times), cells in the brain activate in a way that sends the message that an object -- a cloud, a rocky outcropping -- is a face (if it bears enough resemblance, and even if it is vague).

When there are shades that seem to fit the way that eyes are darker than the forehead, or the mouth darker than the cheeks, these can be processed as facial features, when they are not, argue skeptics, and in some cases this can be right.

They also tell us that it can be dangerous to stare at the sun (also true): There have been cases of retinal damage.

Such was recently documented in a medical journal that detailed the affliction in several who had visited sites such as Medjugorje.

But the cases have been almost infinitesimal -- considering the tens of millions who have been such places -- and while a single pattern in a cloud or object might be explained by scientists as subliminal "patterning," the questions mount with photos that have not one but several striking resemblances to holy faces, as in that photo above, which was taken during a "miracle of the sun" by Paul Giroux of Deloro, Ontario (he operates a highly successful agency for children and youth residential care and educational services).

Paul's "walk" with the Lord began at a spot of reputed apparitions and was so powerful that not only did it bring him back to the Church after being away for 27 years but "since that experience, I have kept a careful record of my journey and have over thirty journals chock full of amazing experiences."

The supernatural as "natural."

Many are those who experience the same. Of course, when we do -- when we have such experiences -- we are often ostracized or made to feel gullible, especially by those with an approach to religion that is more cerebral than supernatural.

There is the separation. We feel left out. And it hurts -- even  though Jesus said if the world rejected Him, we could also expect it. In a perspective like such, it hurts less.

The world sees or at least interprets differently than do those who now relate to the unseen, to the "illogical," to the invisible, as the greater reality (which by far it is). 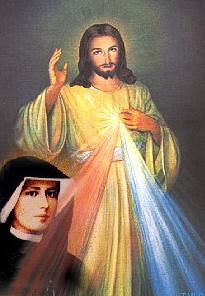 In the photo like the one above, a scientist might see normal coloration to the rays, while many like Giroux would see a resemblance to the rays of red and blue as in the famous image of Jesus as Divine Mercy (representing the Water that makes a soul righteous, and the red symbolizing the Blood that is the life of the soul).

In this case it is yet more interesting because the photo was taken on the day that St. Faustina Kowalska -- who received the Divine Mercy revelation -- was canonized.

Coincidence? Three o'clock in the afternoon, of course, and in addition, is the Hour of Mercy.

Does that figure into scientific calculations?

There was also the case of the black "dot" many have recorded in photos of the sun. This can be a product of the shutter, one might presume, although there are those who also see the black spot with their naked eyes.

In Giroux's case, the dot -- like a small eclipse of the sun -- came when photos of his taken on another occasion were returned. While at first this sober administrator thought the lens was at fault, he now wonders if "the sun represents the Light of Christ which is being eclipsed in today's world." In his case, the dot turned into a square after he took more photos and prayed about whether the "dot" was unusual. Or is it like the pupil of an eye? "The skeptics had their usual comments," he says. "But it kept happening over and over again."

For you to discern. No wonder Giroux took to keeping a journal! 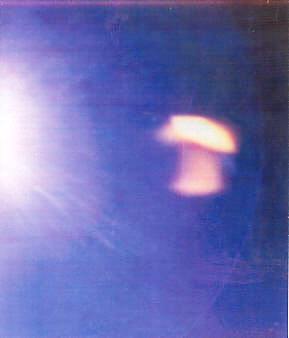 Another photo taken of the sun at a cemetery dedicated to the Sacred Heart had the shape to the left. "I wondered why God would put what looks like a mushroom in the sky," says Paul. "But I then got a chilling thought: it isn't a mushroom, but a mushroom cloud. I went to work the following day and asked my secretary to obtain some images of a nuclear explosion. One of them showed a diagonal flash of light when the mushroom cloud reaches its peak!"

It was in August and later he read that August 22 is a date that a top expert on the Mideast says it is possible that Muslims could pick to launch a holocaust, for it is the anniversary of one of Islam's holiest events and a potential candidate for the time to start a cataclysm Shiite Muslims believe will forever resolve the battle between "good" and "evil."

The scholar noted that the leader of Iran has referred to August 22 several times, including when he rejected – until that date – United Nations requests for nuclear program information. It corresponds to the 27th day of the month of Rajab of the year 1427. "This, by tradition, is the night when many Muslims commemorate the night flight of the prophet Muhammad on the winged horse Buraq, first to 'the farthest mosque,' usually identified with Jerusalem, and then to heaven and back," Lewis wrote.

In Islam, as in other religious, certain beliefs describe the "cosmic struggle" at the end of time. As opposed to a prediction of a date, is the photo a snapshot of what could happen, and as such is it a warning?

How many us us get inklings that the world would never accept?

Can we go too far? Yes. Not everything is of mystical import. 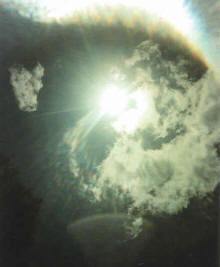 But the point is that the world is mysterious to those with a different set of eyes -- those with the eyes to see and the ears to hear.

"I am writing to you because my life is one spiritual happening after another," wrote another viewer, Anne Barrett. "People are always telling me that I should write a book because my experiences could give people hope and a greater faith. The things that happen to me are extraordinary and I would so love to help people if I could."

If anyone was here, they would have no doubt about the miraculous.

"Just a thought, but I think that it would be good to read an article you drafted about the ostracizing one can experience when he or she proclaims the Good News or the Culture of Life to fellow Catholics or Christians," wrote someone else, Greg Enos, of Rochester, New York. "I think that the idea of professing one's faith to others has become, even among fellow believers, twisted by today's American culture into a 'no no,' which is not only sad but exposes one of the deadly lies we face in the war against evil."