There always have been mysteries attached to Fatima -- site of among the most famous apparitions in history -- and there always will. Are there still prophecies to unfold? Did the Pope correctly consecrate Russia to her Immaculate Heart -- as requested during the 1917 apparitions? What about claims that Sister Lucia de Jesus dos Santos, the 97-year-old seer who died Sunday, had said that she would live to see the "triumph" of Mary's Immaculate Heart, as mentioned in the three famous secrets?

Did that triumph occur?

And is there anything Sister Lucia has written through all these decades that now may be released?

She is a prolific writer, as demonstrated through her only real book, Calls From the Message of Fatima. Were there other works -- remembrances of the most famous apparitions since Lourdes and Guadalupe?

Lastly: why does Portugal so mysteriously fit into the picture?

When we say there have always been "mysteries," consider that there reputedly was supernatural activity centuries before the Fatima apparitions. As far back as the 1100s, an impoverished young girl from the nearby hamlet of Reguengo do Fetal reported an apparition of what historians record as the Blessed Mother, and in the 14th century another woman in the vicinity encountered Mary in a vision that won the bishop's approval -- 600 years before Lucia and her two cousins, Francisco and Jacinta, saw the Blessed Mother at the Cova da Iria.

In the same area around the same time a third marvel was recorded as a knight named Nuno and his men claimed to see angels, and a deaf girl claimed a vision of the Madonna just a mile and a half from where Lucia would see Mary centuries later.

It seems like a spiritual "power spot," but let's get on quickly to those other issues:

Have the Fatima prophecies now all been fulfilled?

We know that most of them have. The prophecies, which focused on Russia (a name the children had not heard up to that point), were fulfilled when Russia turned atheistic and the Second World War began, announced by a display of the aurora borealis (Lucia explained this in a series of interviews called Fatima In Lucia's Own Words, page 109). In the aftermath of the war, and during the rise of Communism, the good were martyred, as the Blessed Mother predicted in the first two secrets, and entire nations were absorbed into the U.S.S.R. (for all intents and purposes "annihilated," a term the secrets used).

What about the third secret? Has that too been fully realized (read the entire text)?

The Vatican says yes -- and despite conspiracy theories, and outright cynicism -- we have to believe Rome: that the image of an angel about to torch the world, as well as symbols of a "bishop in white" shot," and many priests martyred, was fulfilled during the terror of Communistic reign and when Pope John Paul II was shot -- perhaps at the behest of those same Communists.

The secret as depicted by Lucia reached at least the majority of its fulfillment in the suffering during the 1900s (immediately after the apparitions) of the Church.

There are those who believe that more is to come, and while we respect their view, they often point to a version of the "third secret" that is very different than what the Vatican released. In that version, called the Neues Europa secret (after a German magazine that printed it), there were apocalyptic descriptions of a great punishment coming in the second half of the twentieth century that would involve a "big, big war" and of "fire and smoke" that would "fall from the sky and the waters of the oceans turned to steam -- hurling their foam towards the sky, and all that is standing "overthrown." Millions and more millions of men would lose their lives from one hour to the next, said this version of the "secret," and those who remained living at that moment would "envy those who are dead."

Half of mankind (claimed this version of a secret that, at the time, the Church had not yet released) would be "killed in a matter of hours." It was the "time of times," claimed the report in the magazine.

That was in 1963 -- and one of the problems, of course, is that the second half of the twentieth century has come and gone without half of mankind succumbing. In other words, the Fulda "secret" was a false prophecy.

Another problem is that Sister Lucia herself denounced the "secret" as a bogus version of what had actually been foretold to her.

A mystery: why, later, did Pope John Paul II, speaking at a cathedral in the German town of Fulda, reportedly mention that the Fatima secret contained information on millions dying from "moment to moment millions will die"?

And why did a similar message emanate from an alleged site of miracles called Akita in Japan?

Mysterious questions. We can't figure Akita out, but there is a good chance that John Paul II had heard of the controversial Neues Europa message, and may have been referring to that; the Fulda remarks were allegedly in 1980, and it was not until a year later, in 1981 -- after the assassination attempt on May 13 (the Fatima anniversary) -- that the new Pope studied the authentic version of  the secret.

Is the version that was released five years ago by the Vatican true?

Sister Lucia signed her name to it (which is enough for us), and in its language and focus on what could result from Communism, it flowed perfectly from the other two parts of the secret. There are no credible challenges to what the Vatican released.

Moreover, Sister Lucia herself repeatedly implored those who insisted that the consecration of Russia was not properly done to halt such assertions; she said the 1984 consecration of the world to the Immaculate Heart of Mary by John Paul II had been fully accepted by the Virgin Mary -- smiling coyly (and indicating that apparitions were continuing at least into the 1990s) when asked if the Virgin herself had told her this.

Translation: Sister Lucia hinted that the Virgin Mary still appeared to her and had directly told her that the consecration finally had been accepted.

What about the promise that Mary's Immaculate Heart would "triumph"?

We're not sure about this "promise" that she would live to see the triumph (it is not in any formal record that she herself said), but even if she did, she says she did see it: 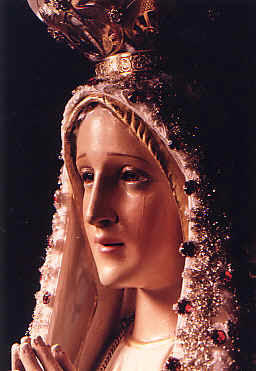 In interviews during the early 1990s, Sister Lucia told visiting cardinals and bishops that the triumph had come in the way of Communism falling in Eastern Europe and the Soviet Union -- an explanation that made sense in light of the secrets' preoccupation with Russia and an explanation that seems further credible when we stop long enough to realize how incredible, what a triumph it was, it was that Communism fell, at least for the time being, without a nuclear war.

Was that not what the real secret symbolized by an angel torching the world as if through war?

And what about Portugal? Is it not true that true to the secrets, which said that the dogma of the faith would always survive there, that it kept away from the kind of secularism and fascism that ensnared so much of Eurasia (and even its neighbor Spain)? Has not Portugal remained one of the most faithful of Catholic nations?

We'll wait to see if there is anything else that Sister Lucia has written. For the most part, in her waning years, she accepted visitors and questions about the Consecration, the secrets, and the triumph with a look bordering on bemusement. Her own spirituality was relentless and her Catholicism, as expressed in her book Calls, revolved around simple Church teachings.

Her main message: live a good life, a life of love, of humility, a life of hiddenness, a life of obedience, of devotion to Christ in the Eucharist.

Does it mean the world is out of the woods? Hardly. There are secrets from other places. And Sister Lucia did say that we are in an apocalyptic battle between light and dark. She confirmed that God does send punishments (as in Revelation, by way of angels).

The question now is whether the world will come back to those teachings, or whether it may be the case that the angel will once more be poised to set a torch to the globe.

From the archives: the secret history of Fatima]