Queen of Peace,  a video by a professional TV team that  interweaves never-before-seen archival footage of Medjugorje with exclusive interviews with the seers themselves, giving an 'unparalleled account of the most important event occurring in the world today.' Wayne Weible calls it a 'must-see documentary!' A great gift for those who have been there or want to go! (Recommended)! CLICK HERE

FROM JFK TO OBAMA, STRANGE EVENTS HAVE BEEN READ BY MANY AS PROPHETIC 'SIGNS' 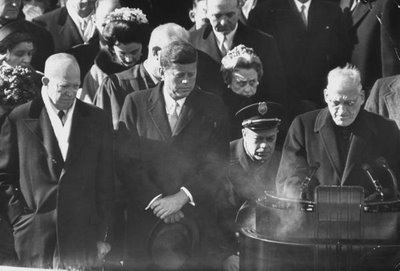 There have long been peculiarities associated with presidents, including during Inauguration.

Few remember that the lectern began to smoke (profusely) during the inauguration of John F. Kennedy as Cardinal Richard Cushing of Boston prayed the invocation; a heater apparently malfunctioned, causing smoke to pour from both sides as the prayer was read. (You can view it here.)

Uncanny? "Preserve his life and multiply his days, with health and wisdom. Grant unto him progress in all virtues," prayed His Eminence. "Guard him within the realm of Thy grace and gird him with the armor of faith, prudence, and high morale. Sanctify his soul and illumine his mind by Thy Holy Spirit. Let a host of heavenly angels be his constant guardians, so that, guided and guarded thusly by Thee, he may attain his noble goals. Finally, O Lord, bless the tenure of his office, so that he may be victorious in all his struggles against evil, violence, injustice, and threats of war."

Was it an omen?

A flashpoint in a battle? (As we all know, Kennedy's days would not be long).

Protestants had accused Kennedy of being an anti-christ; the same charge had been leveled against F.D.R. This can be very risky business. As one person claimed to receive (in a word of knowledge): "Do not accuse anyone of being the false prophet or the antichrist because their fate is sealed. Satan will not reveal their identity until allowed by Almighty God. My Holy Spirit will identity these men at the proper time, not your time. For when you falsely accuse another soul of being either the false prophet or the antichrist, you offend your God."

But it is interesting!

Throughout the decades, many have looked for indications that a leader is a "false prophet " or the "anti-christ." There was Ronald Wilson Reagan. As one might recall, the number of letters in his first, middle, and last names tallies to 6-6-6, leading his detractors to point up Revelation 13:17-18: "...and he provides that no one will be able to buy or to sell, except the one who has the mark, either the name of the beast or the number of his name. Here is wisdom. Let him who has understanding calculate the number of the beast, for the number is that of a man; and his number is six hundred and sixty-six."

Of course, Reagan was not the anti-christ.

Still and all, there are many and sundry coincidences. One can take what one will from events. Omens? Signs?

George Bush senior's presidency came crashing down immediately after he became sick to his stomach (under a table) during a formal state dinner in Japan; he never recovered. Bush was succeeded by Bill Clinton, whose photograph raised eyebrows on the cover of Time when the two top portions of the "M" in 'TIME" set behind his photo formed what looked like horns on the back of his head (he would become immersed in scandal). It is a tough -- and worldly -- business, politics. Former Mayor Rudolf Giuliani's bid for the Republican nomination went downhill rapidly after a debate during which lightning caused static to over-ride and blip out his microphone during a debate as he was hitting back at a bishop who had criticized Giuliani for his stand in favor of abortion. This did seem a might too coincidental. Smoke. Lightning.

During all the shooting in the Iraq War, Vice President Dick Cheney shot a hunting companion; President George W. Bush was criticized by making the sign of the devil with his fingers (actually he was using the "longhorn" victory signal popularized by the University of Texas football team).

Finally, there is President Barack Obama. Prophecy sites were abuzz last week (we speak here on 1/25/13) when during the announcement of two top financial regulatory officials a fly buzzed him and landed on his forehead. The forehead!

This was not only two days after extolling abortion and gay-marriage rights at his (distressing) inauguration, but also one of several such occurrences.

In 2010, President Obama had to halt a speech about health-care reform as another fly flitted around him and in 2009 he killed a fly on camera during an interview on CNBC.

During his campaign in 2008, Obama brought a local interview to a stop after a swarm gathered around him.

Those reaching to link his troubles with dark biblical references would have little trouble: Beelzebub is referenced in 2 Kings 1:2-3, 6, 16 and the name translates into Hebrew as "Lord of the Flies." Jewish scholars have long interpreted the title "Lord of the Flies" as the Hebrew way of comparing the followers of the Canaanite "deity" to that flying insect.

It is a time for prayer (not accusation).