THE MAILBAG: VIEWERS EXPRESS CONCERNS ON HOW OCCULT HAS GONE MAINSTREAM

With the "Twilight" series all the rage, there is concern about how prevalent matters once considered esoteric have become.

How far to go? How much to believe?

When is it legitimate concern? When is it paranoia?

One can say if nothing else that the occult has been mainstreamed.

"It seems everyone raved about the opening Olympic ceremonies," noted one viewer from the UK. "I was quite disappointed and was disturbed by the demon presence in the ceremony. There was the reading from the writer of the Harry Potter series, then the bad night dreams of the children. Horrible black satanic demonic creatures roamed, then near the end there was black smoke and more black demonic creatures seemed to crawl out of the floors/sewers. England has more witches and warlocks than priests now. The ceremony was around the caldron. I believe the actual name of the arena was called 'the caldron.' I was thinking that if there were witches during the ceremony, and all the athletes were gathered round, would not the witches blessing be distributed and spread to all the athletes who would go back to their countries with this 'blessing'? (You can Google the ceremony -- I found it very disturbing). Bishop Fulton Sheen talked about being on a plane and he decided to fast during lent and did not take a meal. The woman decided to fast as well so the bishop asked if she was Catholic, and she said no, she was a witch and was fasting for abortion and divorce. Canada has witches covens that meet in southern Ontario. There was a meeting in May in which they prayed for the destruction of Canada."

Frets Ingrid Borah of Casper, Wyoming, "A friend of mine raved about a book by John Edward, Practical Praying, which is meant to be a ‘guide’ to using the Rosary in our prayer life. So, dummy me, I ordered two copies of the book only to find out that the author is a practicing Catholic who is also a ‘renowned psychic medium’ -- i.e. he contacts the dead. I read his book and now I have two copies I want to burn. But I would like some warning about this. He mixes the sane with the insane and comes up with ashes. So many are buying this book and my concern is Satan getting a foothold on those who haven’t prayed in a while and want to come home. This guy’s stuff could lead them in another direction. Would  you please spread the message?"

Notes viewer Sharon Leonard from Oshawa, Ontario: "This story [on Spirit Daily about a former Satanist who explains how demons can drain energy] reminded me of something that happened to me a few years ago. My son John, who was around eight at the time, invited his friend Tyler over one day. While I was making lunch, I overheard John telling Tyler, 'I’ll trade you some of my Pokemon cards for that toy sword of yours.' Tyler agreed to the swap, and I didn’t think anything of it. Later that night, while I was in bed, I was plagued with insomnia. This is very unusual for me, since I normally fall asleep before my head hits the pillow. After tossing and turning for a couple of hours, I begged God to help me fall asleep. All of a sudden, a thought entered my head: 'Get rid of the sword in John’s closet.' Huh? I thought. It was then that I remembered John’s swap with Tyler earlier that day.

"John was sound asleep when I entered his room and looked at the plastic sword in his closet for the first time. The design on the handle was a demon’s head, which I found very unsettling. I promptly threw the sword outside in the trash and slept like a baby! This incident made me realize that evil spirits can attach themselves to objects."

About a reputed mystic, we hear the latest from Father Joseph Leo Iannuzzi, who writes:

"I joyfully greet you from Rome. This year the first doctoral dissertation on Luisa Piccarreta’s writings will released and published with the approval of Rome. I spoke this past week with Archbishop G.B. Pichierri and informed him of the thesis; he sent me his cordial greetings. Because I depart tomorrow for a commission, I wish to pass onto you in haste a timely communication I received this morning from the Archdiocese of Trani, Italy concerning Luisa’s writings and Cause for Beatification. This letter will seem to the reader to have some highs and lows, in terms of the joys and sorrows expressed therein that range as follows: Introduction: An appeal to unity and to an end to all quarrels and jealousy that continue to abound in the household of faith. Let us remember that Luisa sought no fame or notoriety, but chose the hidden life. Articles 1-3: A recapping of past events. Article 4: A reminder that Luisa is not a heretic and that her 'original' doctrines are sound, despite what some continue to claim. Let us recall that the doctoral dissertation on Luisa’s writings that I have be commissioned to write, that is completed and that has received Rome’s approval will be available to you soon. In this dissertation, demonstrated is the orthodoxy of Luisa’s doctrines. Luisa who had only a first-grade education possessed an very simple and limited vocabulary that express her doctrines, which several readers have erroneously interpreted 'ad litteram' (an expression used by Archbishop Carmelo Cassati). Hence the importance one must lend to properly interpreting and explaining Luisa’s doctrines in light of Sacred Scripture, Tradition and the Magisterium, which is exactly what this dissertation achieves for the reader. Article 5: A reiteration that the Archdiocese of Trani does not vest with authority or delegate anyone or group outside of its diocesan juridical boundaries. Canon Law empowers each Local Bishop with authority over those in his diocese. Article 6: A reiteration of an equip that was once created. Article 7: A stern prohibition to those who have and continue to ignore the Moratorium, who continue to publicly disseminate Luisa’s writings on the internet and in public printings. Articles 8 and 9: An encouraging reminder to continue to form prayer groups on Luisa’s 'spirituality' and to read of Luisa’s writings."

As for "small miracles": 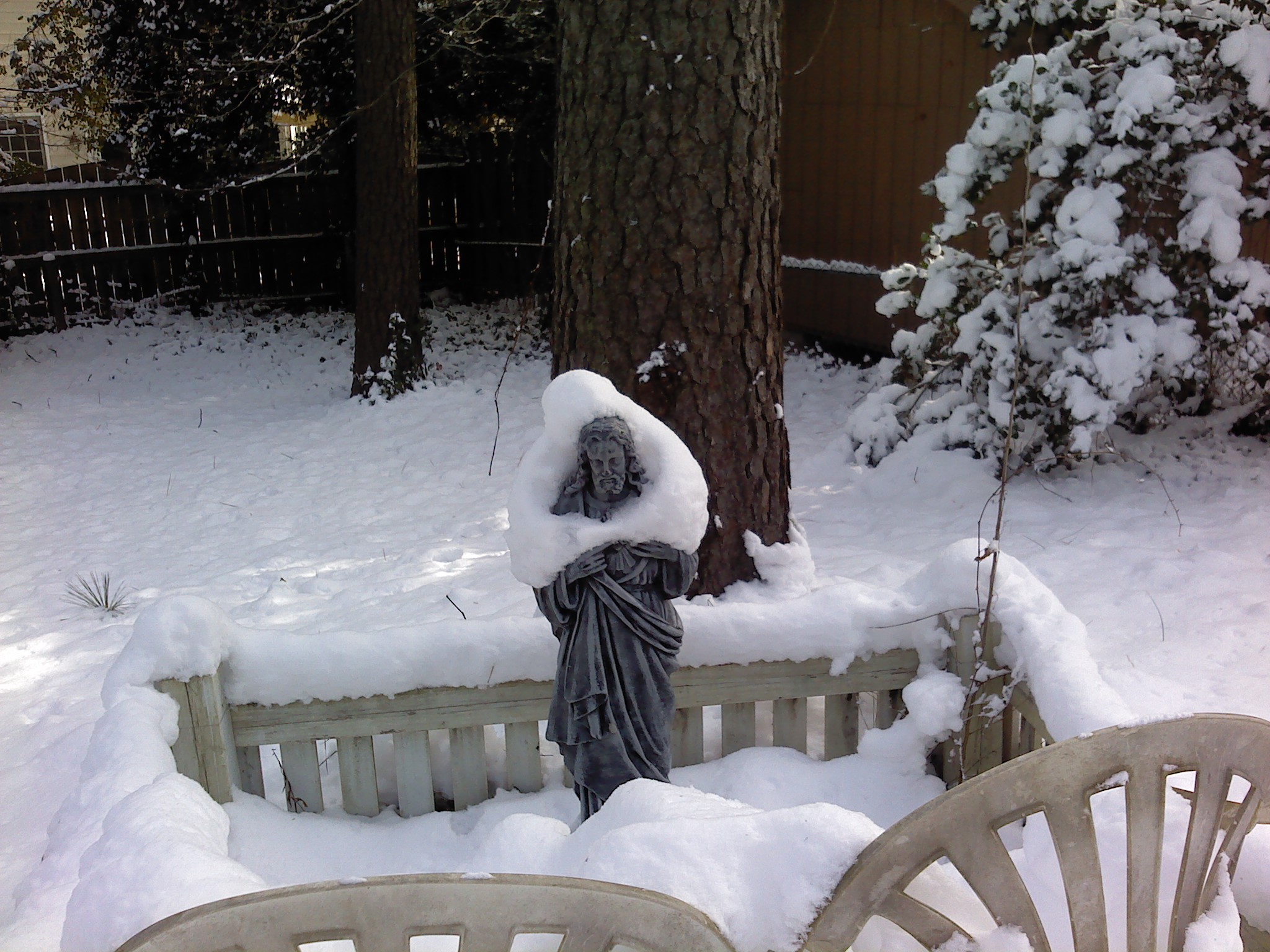 "I was just reading today's feature about cloud formations and signs in the sky," writes MaryAnn Steele of Greensburg, Pennsylvania. "I wanted to tell you a story that my mother has told us for years. Her name is Rita and she is now 83 years old. When she 12, she and another girl, Annie, were collecting scraps of coal behind the company store and beside a big ash dump in the little coal mining town she grew up in here in western Pennsylvania. They looked up at the sky and noticed a cloud that was shaped, in her words, 'exactly like a sword.' According to my mother, the end of the sword became pointy and then rounded several times. Although she doesn't remember it now, she also used to tell us that the sword began to point downward. That's when she and the other girl got scared and ran home. She says it was a few days to a week later when she was at home listening to the radio. They weren't allowed to turn it up loud, so she had her ear up against it to be able to hear. She didn't quite understand what she was hearing, but she could tell it was important, so she turned around and repeated it to her dad.. 'the President just declared war on Japan!'

"I also wanted to tell you about my husband's recent experiences. He sings with an an oldies group, and they were singing the other day at a housing plan for senior citizens. At the end of their first set they sang 'Over The Rainbow.' Just as they finished, a rainbow appeared in the sky. He said it was a full rainbow, and really bright, not dim as they sometimes are. Later, a lady came up to them and told them that her husband, who died five years ago loved that song. It was even sung at his funeral. She believed it was a sign for her from him. During their second set they sang  'Stormy Weather' and it began to rain! The same thing had happened to them a few weeks before when they did a show in Cranberry, Pennsylvania. Just as they finished singing 'Stormy Weather' it started pouring!"

"Going through some cell phone camera pictures,  found these taken after a snow storm," noted John Thelen [see above]. "Pictures taken at my father's house in Raleigh North Carolina. He is very devoted to the Catholic faith and has been overseeing my family's spiritual awareness without pause. I am one of seven children. Grandchildren are 23 in number,  great grandchildren are 27.  He was a member of Patton’s army in Europe, saw significant action, came home, married my mother (who left to be with God in 1995), raised a family, and is still with us. Although slowing down quite a bit (88 years old) he is still active in his prayer life. Thought you might enjoy."

[resources: A Message of Hope and Christmas books]