THE MAILBAG: DOES GOD MANIFEST IN STARS, ON WINDOWS, IN PHOTOS OF STATUES? Often, it's in the eye (and heart) of the beholder.

Skeptics scoff. Naysayers taunt. And to be fair, it is very difficult, often, to discern between miracles and happenstance (if you believe in happenstance). 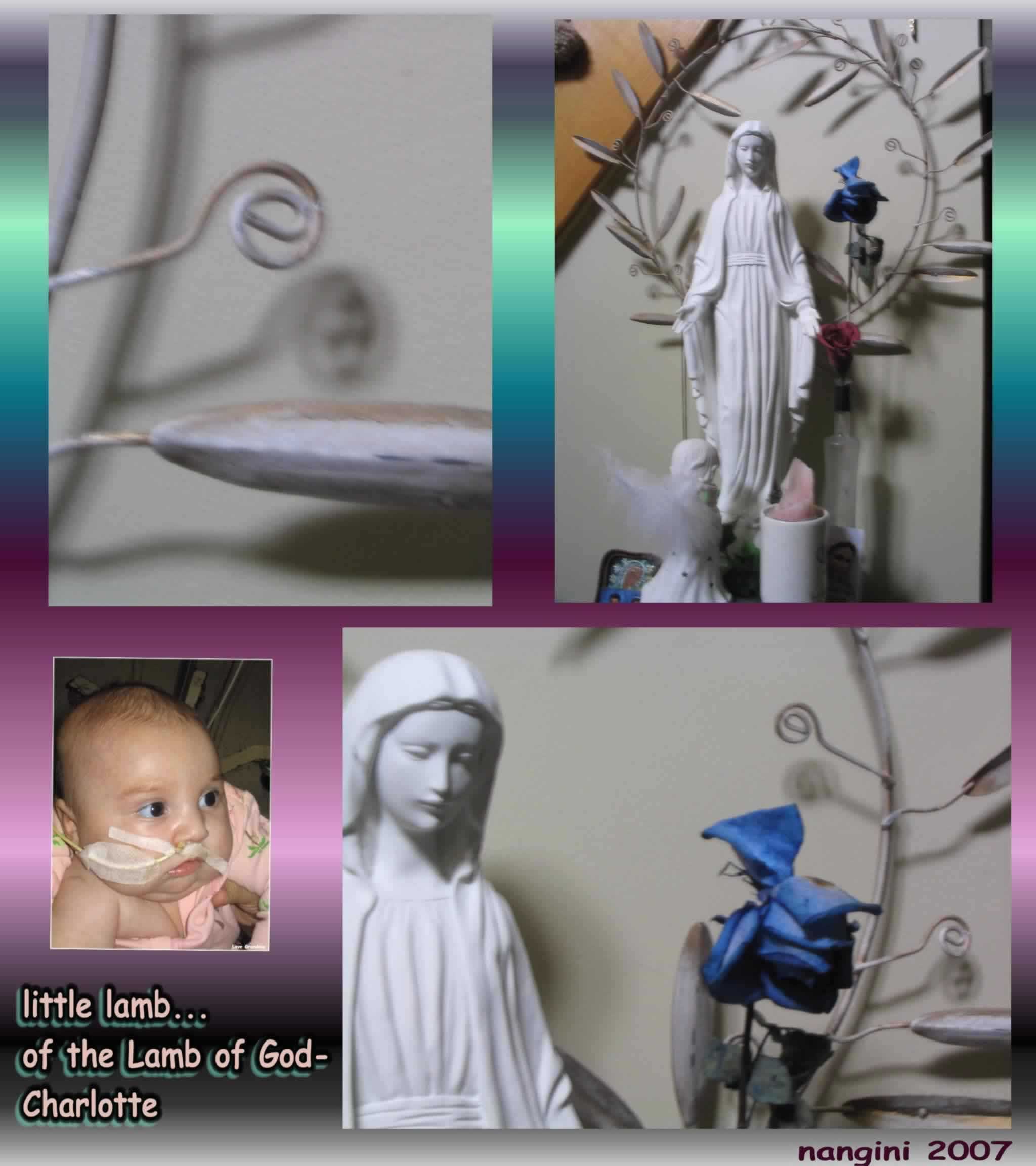 Is there is a Cross in the photo above (of Polar Ring Galaxy NGC 660)? Many would say: too vague. Others might react: I see it right away. As someone recently noted, we use the expression "signs of the times" but could also say, "time of the signs."

We get so many. And to "put them down" (offhandedly) is to risk -- possibly --putting down an action by God. 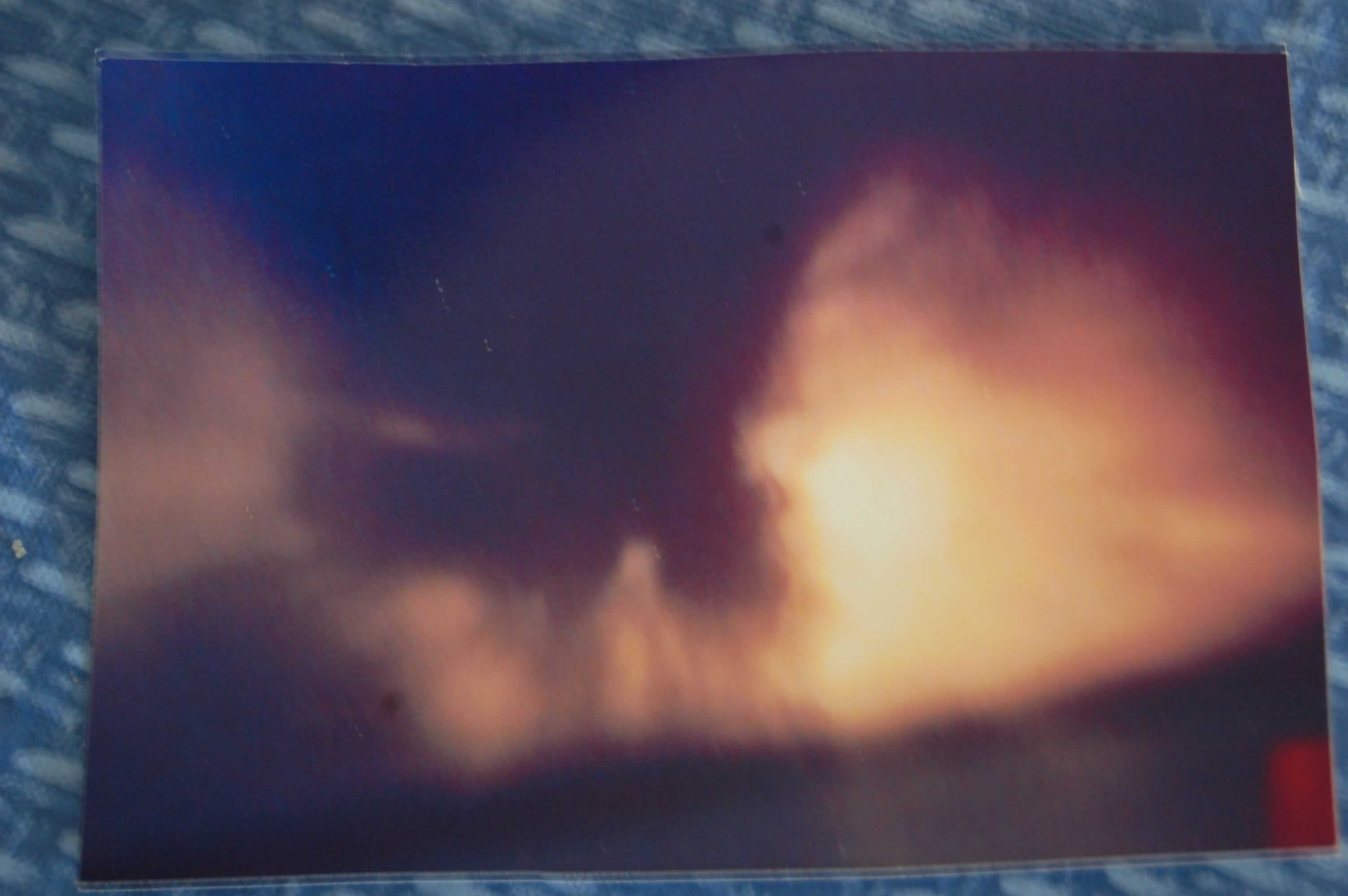 Do you see something in the photo to the left? And is there the tiny shadow image of a child in the one to the right?

Most important in such cases is what was transpiring with the person or family involved and how the "miracle" made them feel.

When a reflection or shadow affects someone -- in a positive way -- that in itself may speak of significance.

When is a statue "weeping" and when is it condensation? Is it condensation when the droplets disappear with each Hail Mary of a Rosary. Or when the next morning a tear is seen in the eye of a second statue at the other side of the church (a statue made of different material)?

They are matters for each to discern (with humility). With images, is it what scientists now call [see study] "illusory face perception"? 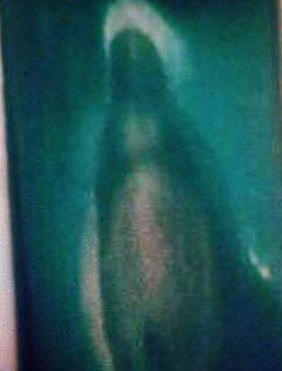 Recently, headlines were made around the world when an image of what seems like Mary appeared on a secular hospital in Malaysia, drawing hundreds of onlookers -- and now removed and taken to a local church for safekeeping and veneration (to which we say: bravo). It is an interesting case not only because of the textured colors and subtly ethereal quality (complete with halo) but also because some see an image of Jesus in her stomach region when the photo is enlarged. It reminds us of a Guadalupe-like image that appeared on the window of a Boston hospital several years back [see here] and one much larger and more clear that manifested across a number of large separate glass panes on a Clearwater, Florida, office building (see here, until, tragically, it was broken by a disturbed young man with a slingshot; but had this one been moved to a church!). 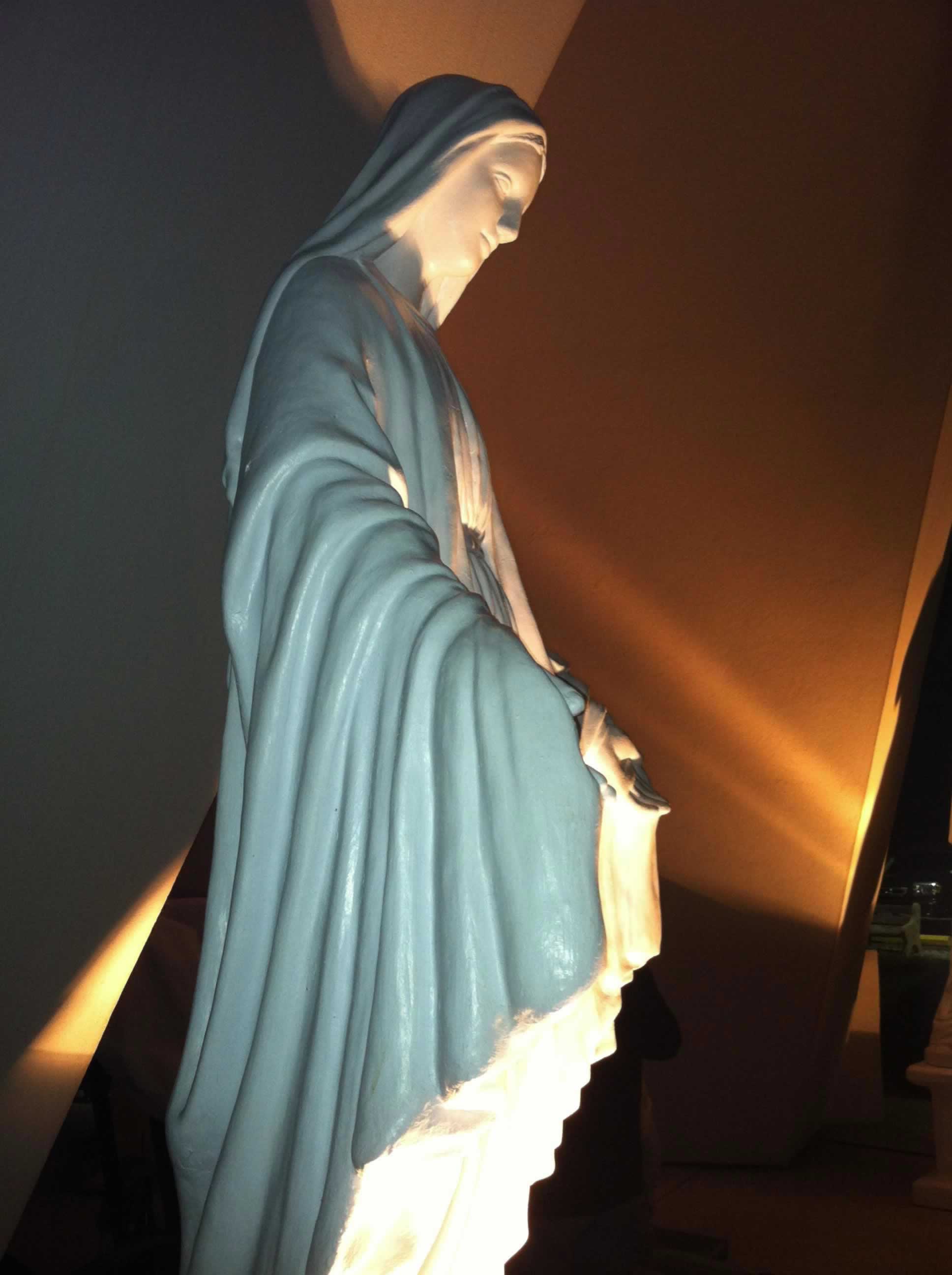 "Attached [left] is a photo, taken by my daughter, of the Blessed Mother at the Padre Pio Shrine is South Jersey this week," wrote George Creel recently. "The actual statue is pure white, but it appeared on her camera with a blue mantle! The picture was taken in the evening after the group she was with finished praying the Rosary. There were several witnesses who saw this image on her cell phone immediately. I can assure you that it was not altered in any way! The group were members of a Betania  [organization, modeled after the famous apparition in Venezuela] in Williamstown, New Jersey. My daughter, Kaitlyn, is friends with one of Maria Esperanza's granddaughters, Vanessa, who lives in Williamstown. I don't know if this has anything to do with this, but Vanessa's mother, Coromoto (daughter of famed mystic Maria Esperanza, who was the seer at Betania and whose cause for beatification is underway -- in New Jersey) just happened to be in town this week helping Vanessa with her new baby."

There are those who snicker though it is not a game nor trivial if Heaven does such things. When is a sun "miracle" a miracle? What about a statue that suddenly seems like it has an inexplicable inflection?

"This is the story behind the picture with the golden shadows [below]," writes Mary Angela Nangini. "The Statue of Our Lady is in my house in Brampton, which is part of the Greater Toronto Area. I had missed Our Lady's procession and crowning at our Church at the end of October 2010 and I was so disappointed. Looking closely, I realized Mary was still wearing the summer crown. It became an extra-special occasion as I crowned her with the autumn crown. I always try to light a candle in front of Mary's statue as I pray the Rosary, such that a glow of light is always present. 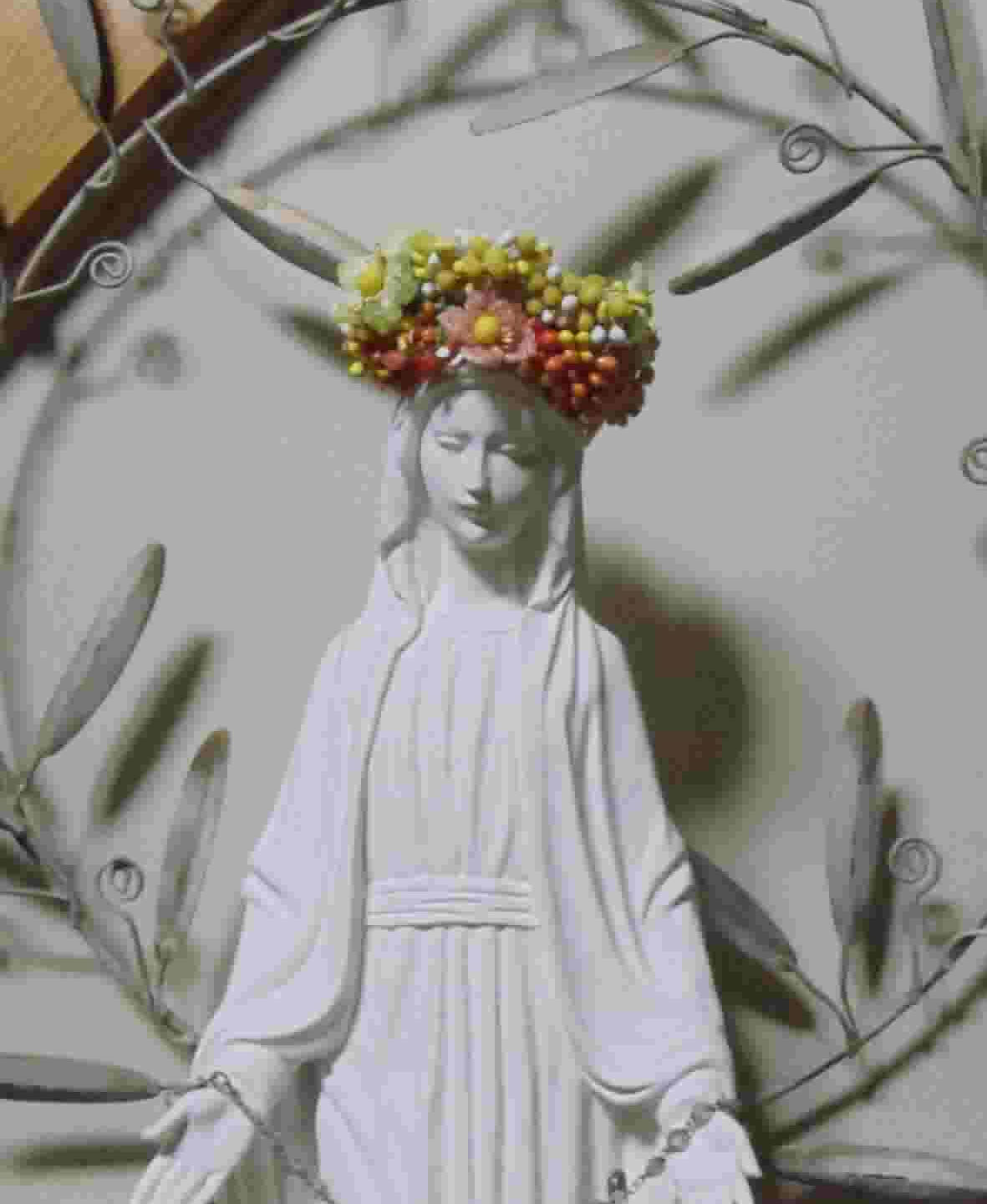 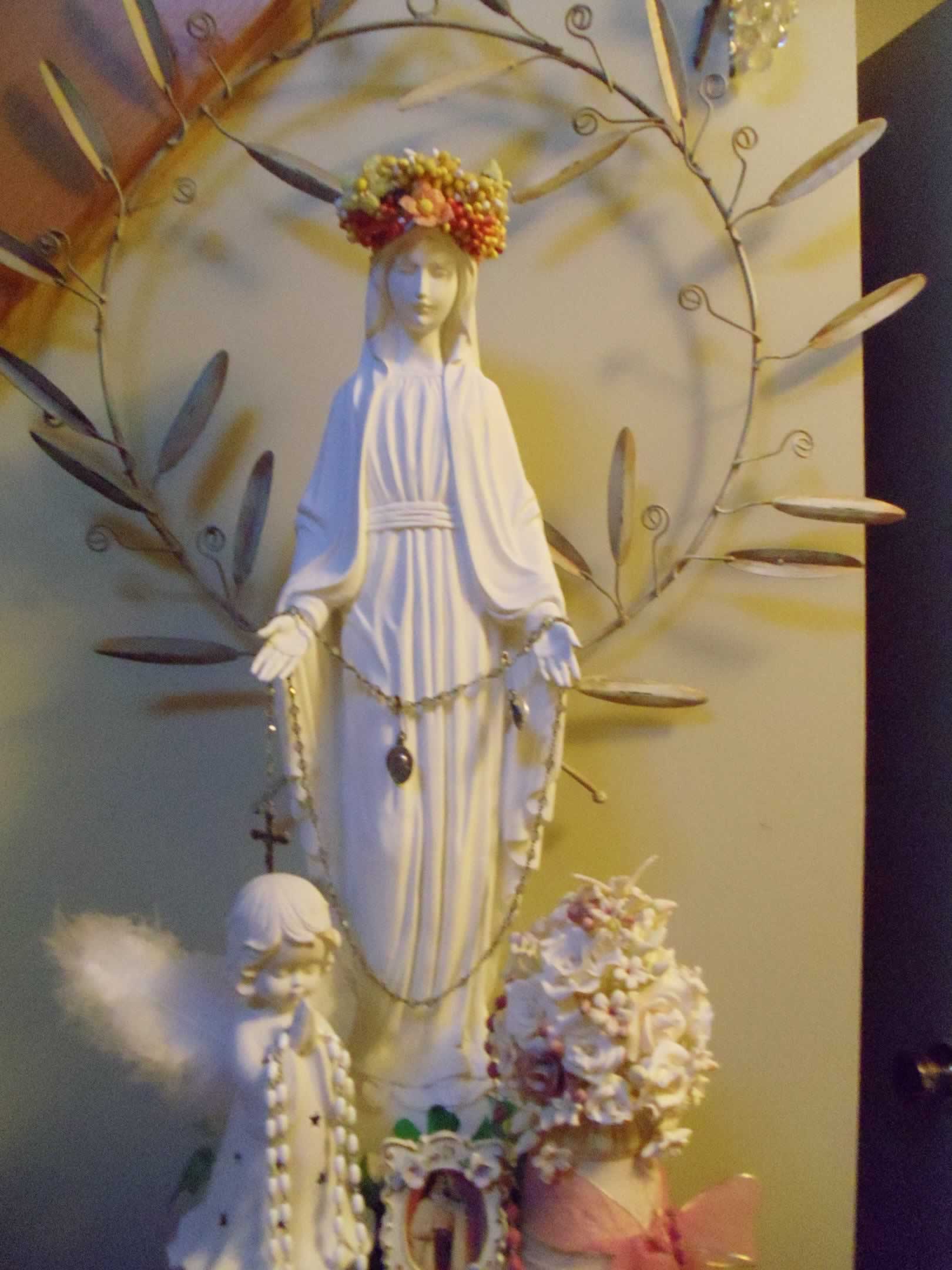 "But after extinguishing the candle this special night, there remained a glow after that didn't register until I finally became conscious of it (as I repeatedly passed by doing my work). The shadows behind Our Lady and behind the body of the statue itself were no longer grey as the other picture shows but golden! I took pictures of this beautiful glowing light with and without the lit candle and with and without the house lights, but there was no difference! The shadows remained golden for that night. I have many pictures at different times of the year since 2006, and none has this golden shadow behind Mary. Doesn't Mary look like she's smiling?"

"My name is Roger Jones and I live in Merthyr Tydfil South Wales United Kingdom," wrote another. "A while ago I was looking at the Hubble photographs when my attention was drawn to one particular picture (galaxy Ngc 1316, right) I was able to see what looked like the figure of a man with flowing hair and beard. I contacted The Mail on line and they published it on the internet. If you go to Google and input 'Hubble captures face of God mail on line' you will see a bright star , and just below it the face of what looks like an old medieval painting of God the Father! I later came across another Hubble picture, again unusual (astronomy picture of the day 2000 August 16). This I noticed is the same galaxy (ngc1316 ) but this photograph looks like Our Lord to the right of the bright (morning) star! He looks to have a large beard with what looks like three figures to the right of him? Slightly above and to the right you can see a figure of a person in gold (Our Lady?). And to the right of that what looks like the Sacred Heart? Hope you can see it! The heavens certainly proclaim his glory. If you then turn the picture so the bright star is above Christ you can then see God the Father of the other picture. Please feel free to publish, that's why God gives these signs. We use them to help those who have eyes yet don't see!"

The Holy Spirit also -- and mostly -- touches us through normal photographs and events of life. Wrote Judy Patterson of Tempe, Arizona: "Wanted to share some cute photos of my one-and-a-half-year-old grandson Landon Williams kissing the Blessed Mother before he goes to bed. He does this every afternoon before taking his nap!"

And no doubt sleeps all the better for it. [Send us yours here] 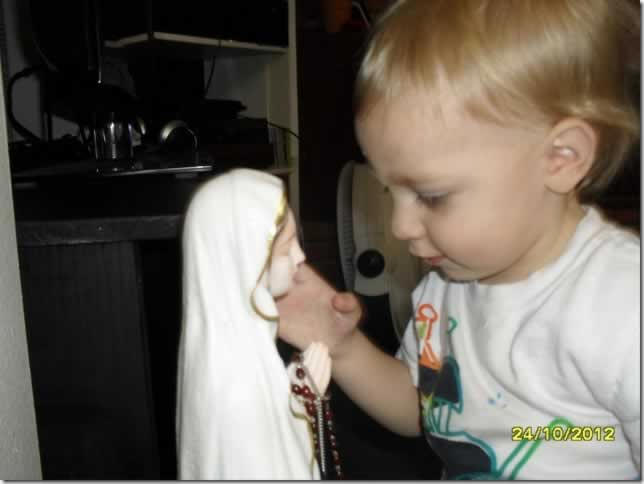 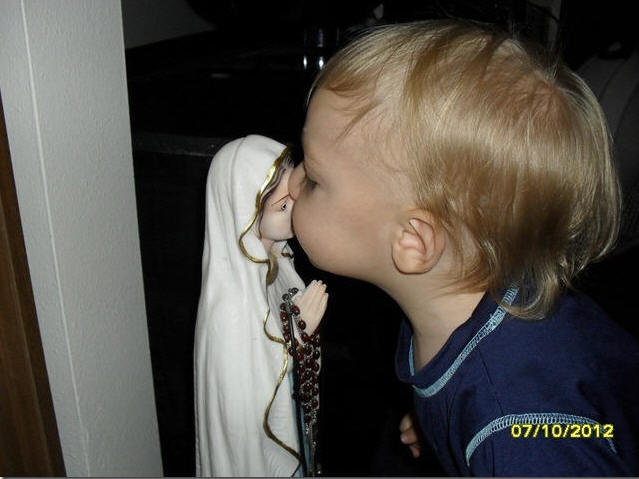 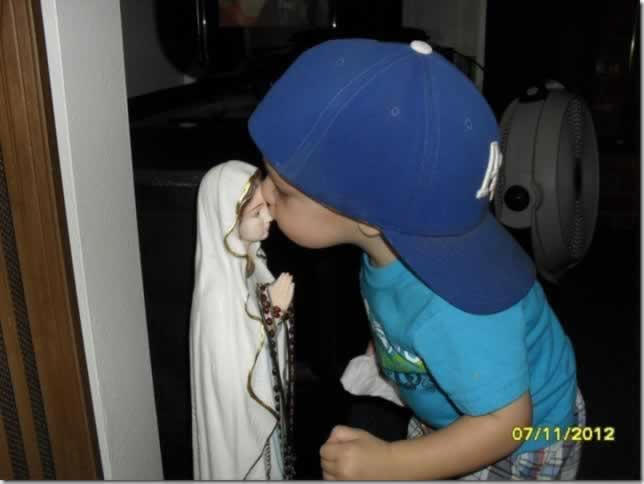 Mary on a piece of wood (in Utah)?