Queen of Peace,  a video by a professional TV team that  interweaves never-before-seen archival footage of Medjugorje with exclusive interviews with the seers themselves, giving an 'unparalleled account of the most important event occurring in the world today.' Wayne Weible calls it a 'must-see documentary!' A great gift for those who have been there or want to go! (Recommended)! CLICK HERE

FROM THE MAILBAG: ARE MANIFESTATIONS OF LIGHT THAT REFLECT IN PECULIAR WAYS PRECURSORS TO A SIGN? 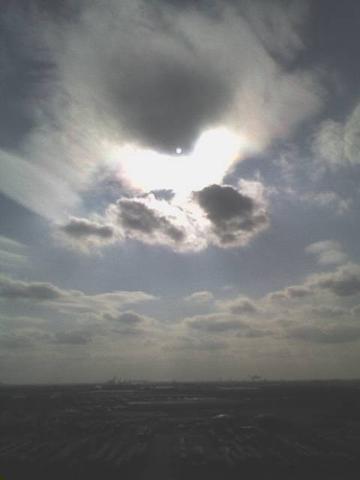 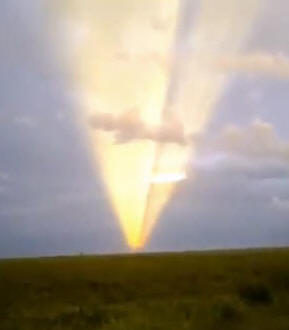 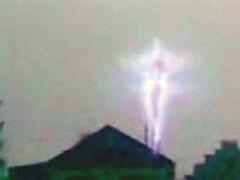 We are in a period of pronounced evil. At the same time, there are signs of God -- often luminous ones. Might we come upon a day when a special sign is seen? We think back to December 30, 2004, and a further missive to the 1990 prophecy which said, "When the huge light is seen, I will act in a way I have not acted before." Might precursors to that be seen in formations of the Cross and other holy symbols from sunlight and other sources?

It is a rumination. In this notation you see various such formations. At left are pillars of light that were photographed on December 17, 2012, in Brazil near the town of Palo [see video]. They are perhaps strange reflections and refractions of light between clouds or due -- in natural terms -- to some other atmospheric conditions although like others it has not been fully explained. It may be what are called anticrepuscular rays. There is the example from Arizona: a "two-sun" phenomenon [video]. "Two suns? This is the third time that I have seen this two sun phenomenon in seven days here in Arizona. This is very mysterious as I have never seen this strange sunset-sunrise at the same time effect before and as of late, I am seeing these quite often," noted an observer on Youtube [below].

According to one theory, anticrepuscular rays are similar but not as bright as crepuscular rays, which Wikipedia says "are rays of sunlight that appear to radiate from a single point in the sky, specifically, where the sun is. These rays, which stream through gaps in clouds or between other objects, are columns of sunlit air separated by darker cloud-shadowed regions. The name comes from their frequent occurrences during crepuscular hours (those around dawn and dusk), when the contrasts between light and dark are the most obvious." The rays form the illusion of converging at an "anti-solar" point (away from the sun).

The question is whether these types of atmospheric displays are always there -- just more reported, with the blazing speed of new internet media -- or special luminosities meant to send a message. It might be both. At the least, there seems to be an enhancement. In Russia, a video was repeated on news casts showing [above right] what seemed like a Cross pulsing in a dusky sky behind a house. 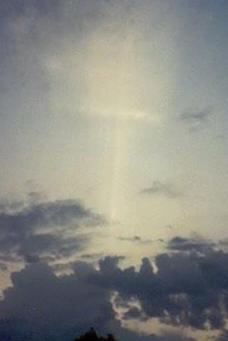 Elsewhere, and particularly at apparition sites, have been formations of the Cross as the sun reflects on water or through clouds -- sometimes even bearing a dove [top and also below, right].

It is for your consideration as we head into such interesting times. As far as Brazil, the original 1990 prophecy had (intriguingly) said: "Know too that God's Hand will be evident in South America. The world will not end but change." And before that it had said: "I will come in towering light. My mother held me in her arms at Medjugorje, as an infant. I will come as she has come, in light," which is interesting in light of recent reports that the Infant spoke (for the first time in its three decades) at the alleged apparition site (on Christmas day).

Because something is "natural" doesn't mean it isn't also supernatural.