We're told by the Blessed Mother to recognize -- and speak about -- "God's signs." What are they? Where are they? Which are signs? Which are not? What might they mean?

Some, it certainly appears, are in events that are daunting, for the Blessed Mother goes out of her way to say we should not fear them. We see them in earthquakes and the violent weather and societal trends -- in war, in terrorism, in bizarre crime. There can be no question that we live in a tumultuous time.

But such signs also arrive, one may surmise, in other ways, including what may be termed as supernatural manifestations (whether in church, at home, or, in the observation of some, up in the sky).

Lately, it has been the assertion of holy images formed in various objects, and however frivolous certain claims may appear (the media like to poke fun of a woman who saw a female form in a grilled-cheese sandwich, which everyone immediately ascribed to the Blessed Mother, though it bore no resemblance, save for gender), we are living at a time when there are far too many images that do bear an uncanny aspect of holiness, and such images seem to be slowly building into some kind of crescendo.

The question is what the crescendo might be and as always which one of those "manifestations" merit further investigation.

At a hospital chapel in Laredo, Texas, it's an alleged image of Christ seen in a Host and acknowledged by a priest who polled the congregation to see who was seeing what. Of seventy there, thirty raised their hands, "saying they could see the image of Jesus Christ," noted a newspaper, adding that no one thought it was a reflection.

In Lodi, California, a knot in the wood of a fence looks startlingly like the Lord. The details are not such that it is a simple case of imagining a holy figure into vague marks on wood. This one is a striking silhouette. In Ukraine, an image of "Christ" as well as His Mother has been claimed in two trees.

Why in nature? Why at this time? Believe everything? No. Scoff at it all? They are God's signs -- at least some of them -- and we ignore them in our intellectual pretension.

As a Pope once said, when it comes to claims of the supernatural, it's better to believe than not believe -- as long as we are not swept into a frenzy.

Back in the U.S. -- where bishops are far more reluctant to acknowledge such phenomena -- a report has arrived of tears welling in the eyes of statues of St. Joseph and the Blessed Virgin (holding the Infant) at St. Ignatius Church in the Florida diocese of Palm Beach.

"The tears were absolutely visible in Our Lady’s right eye and in St. Joseph’s left eye as well," reports correspondent Susan Kruger of North Palm Beach. "The parish at large doesn’t seem to be aware of the miraculous event that are occurring in their church. Certainly not copious tears, but undoubtedly present. A kind lady who was also praying before the statues confirmed what I was seeing and told me that the events began on September 2. She explained that the tears dried up during the week and were not present at all September 8th, when the Church celebrated Our Lady’s birthday. However, a friend who attended the vigil Mass there late Saturday afternoon told me that the tears were visible after Mass on Saturday."

What do the tears mean? To what specifically do they relate? Are the manifestations multiplying, as it certainly appears, or is such an artifact of better reporting -- of quicker communication, especially on the internet?

Near Medjugorje in former Yugoslavia in a town that hosts an orphanage a Cross that was drawn on a plain white wall in a private home has been exuding a thick red substance.

"My daughter is a journalist and had the experience," Patricia McDermott of University College in Cork, Ireland, informed us last week. "She was taken there by a taxi driver on August 10. The Cross had been bleeding for forty days. She saw blood clearly and has two photographs. One shows the large Cross on the wall, and on the right is Divine Mercy and a rosary. The blood is dripping but only down the center on the Cross and also from where the arms would be. There are congealed layers with blood flowing over it."

A question of the hour: Do we interpret blood as the result of sins that reopen the wounds of Christ and tears at Our Blessed Mother's disappointment with what is afoot in the world? When it comes to alleged manifestations -- with "signs" -- how far can we go with them? And for that matter, how high?

"Flare has been the bane of photographers since the first days of photography," notes one expert, Randy Madera, in explaining the "phenomenon" of orbs. "Reflection of light can create many circular flares.

"However, it isn't light reflecting off an object, it is the reflection of light within the lens itself.

"If light enters a lens at certain angles (these angles are dependant on the type of lens being used), it can bounce between the various elements of the lens instead of passing cleanly through them, causing bright spots we know as flare.

"The more complex the lens, the more lens elements it has.

"Flare can appear as one or two spots, and they may not appear to be emanating from any particular source because the source may be outside the picture frame. Also, different lens elements add their own color to different flare spots within the same picture (usually blues, reds, oranges, yellows and greens). This is due to the composition of individual lens elements and/or impurities in them."

What about images in physical objects -- such as rose petals?

The image to the left is an allegedly miraculous one in the Philippines, but the one at the right was sent to us by Jay Reilly, retired police chief in the village of Haverstraw, New York, who argues that such images can be made, as he did, with the one at the right, by simply impressing a religious medal on a petal.

"I used vise grips to compress a Miraculous Medal against a rose petal for a period of three days," he says. "If I had taken my time I could have figured out how to apply the pressure more equally and it would have then looked even better. You can't tell from the picture but the imprint of the face is absolutely stunning. My camera wouldn't focus close enough so the best I could do was scan it into my computer."

Are there illusions? Are there tricks of the camera? Or is there an ethereal quality to the "real" manifestations that defies efforts to replicate? 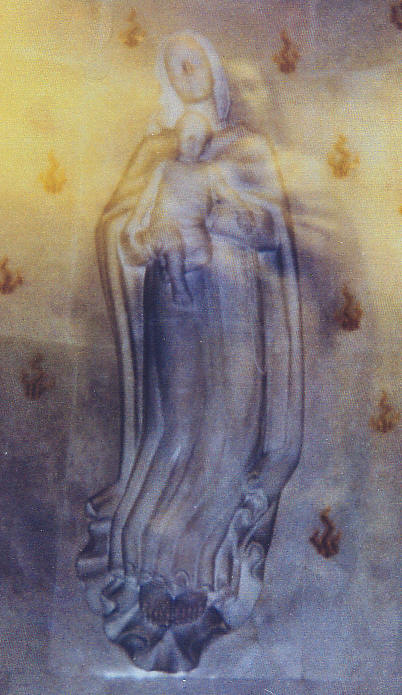 The reputed manifestations are as diverse as they are implausible. In the 1990s, a photo of a statue at the Basilica of the National Shrine of the Immaculate Conception in Washington yielded the "double exposure" at the left when it was developed, as if "someone" -- someone a bit different from the statue -- was stepping out of it.

Was this a sign? Was it a precursor to the current explosion? And what about "signs" in the sky?

In Wyoming, a cloud appeared that looked eerily like a nuclear bomb cloud, or a volcano -- as there is a mega-volcano a few hundred miles away at Yellowstone National Park and as also Wyoming has many deposits of uranium and oil which may also figure into some kind of message.

"Last Sunday night (August 26) I woke up around 12:30 a.m. and the moon seemed to be shining differently than I had ever seen it," wrote a nun, Sister M. Lorraine, from Boston -- typical of many e-mails we receive. "There were two bands of light coming out of it in the shape of the Cross. It looked like the moon was at the Cross point of the two arms of the Cross. I thought it was very unusual."

"I live in west central Minnesota," wrote another, Ted Mosser of Herman, Minnesota. "On the evening of August 16th, 2007, at about 9:30 p.m., I happened to notice a bright star while passing by a bedroom window. I noticed it because my eye caught it just as it appeared to 'go out.' So I stopped and watched the star, and was amazed to see it alternate between full brightness and then almost invisible. There was no regular pattern to it; it seemed as though someone had a dimmer switch on the star and was playing with the dimmer! I took great care to observe that no other star in the immediate vicinity was doing the same thing, which would indicate passing clouds. But it clearly was this star alone. I even watched it through binoculars, and of course it did the same thing -- it would be bright for a few moments, then in a moment would dim down to almost nothing for a few moments, then come back again. My wife observed this also. It went on for roughly an hour, then stopped doing it.

"I called a physicist at a local university the next day.  He confirmed for me first that the bright star I saw was probably Jupiter (the planet has been in the southwest sky, about twenty degrees above the horizon, this time of night for the past several weeks). However, he didn't have an immediate explanation as to why it would appear to be going 'on and off.' I myself have studied some physics and astronomy in college, and I understand reasons for certain fluctuations in intensity and color, but this was completely inexplicable. "

For most such, there are astronomical explanations. Stars vary in brightness -- at least to our eyes. Planets twinkle. There is space junk. There are the refractions of clouds. There are satellites and space stations. Does God work -- does He speak -- through what we sometimes see above?

Our friend Fran Behrens sent the above of the moon, taken in Central Florida, with a digital camera. She felt the end result was a heart, and she felt the message, in such times as we live, should be obvious. Just the twitch of the camera when the photos were taken?