Fascinating it is: how many claims of the supernatural flow from South America.

Through the years, to be frank, a good number have seemed troublesome.

There have been cases in which alleged stigmatics bled in a way that seemed to lack supernal elegance (so unsightly as to make one wonder if it was sent from Heaven), or seers who have uttered prophecies that are so dire and detailed that a flag is raised (particularly when the predictions do not materialize).

Yet, there have also been the approved messages from San Nicolas, a reputed apparition not so far from Buenos Aires (the Pope's old region); the fully sanctioned apparition site of Betania, Venezuela; a bishop-approved apparition in Cuapa, Nicaragua (if we can throw Central America into the mix); dramatic claims in the highlands of Ecuador (where a young woman received messages); and most recently, apparitions that were approved, for the period of 1994-1998, at Itaparinga, Brazil, along the famed river called the Amazon.

A recent message there to a young man named Edson Glauber (mindful, again, that the approval extends only to 1998):

"Peace my beloved children! I your mother  call you to prayer, love, and faith. Without faith you can not do the Will of God. By faith in God your acts are transformed into works of love towards your needy brothers who expect the help of God and His Love. Open your hearts. Many countries are being destroyed for lack of love. Many of my children are dying spiritually for lack of faith. Believe, believe, believe. God can do everything, but you must learn to trust in His Power and His Presence among you. I invite you to trust in God. I bless you all: in the name of the Father, the Son and the Holy Spirit" (6/4/13).

And just before that: "Peace, my beloved children!  My children, as your Mother I come from Heaven with an Immaculate Heart full of love of God and I desire that this love fill your hearts so that you love the Lord deeply. Open your hearts and pray the Rosary every day for a world that lies in the darkness of sin and the devil. Do not let it be a prayer only of the hand, but intercede, offering your prayers to the Heart of my Son Jesus and asking for His mercy for families and the world.

"These are tough times. Many of my children have offended my Son Jesus very much. God does not tolerate so many sins and such impurity. Provide reparation, reparation -- so that the Lord does not punish humanity for its crimes.

"My children, listen to my appeal. Be attentive to my voice, which calls from God. I have granted you many messages and much gratitude. This is the time for you to decide in the way of conversion that leads to Heaven. The clock is ticking, my children. God is giving many signs in the world and will still appear to many more men in a way they do not know how to explain. This is the time of conversion, for you to love and forgive. Thank you for your presence. I bless you: in the Name of the Father, the Son and the Holy Spirit. Amen!" (6/1/13).

We will withhold much of our discernment until we visit Brazil.

Now we hear of another that allegedly started up in Italy in Brindisi on the "heel" of the boot-like country.

This one reportedly goes back to August 5, 2009, which is interesting because at the famous apparitions in Medjugorje the Blessed Mother allegedly has said that August 5 is her actual birthday (the official one is September 8).

This situation, we are told, centers around another young man named Mario D'Ignazio, who, for sure, has an unusual way of ecstasy (left, reminding one of Kibeho, Africa). According to a website devoted to his supposed visitations, Mario is 29, was a farmer and assistant cook at a hotel, and hails from "a working class family of humble origins."

On that August day the Blessed Mother supposedly appeared at an olive tree not far from his home, near the local airport.

The glorious Virgin Mary, it is asserted, arrived and still comes as a young lady with "a disarming simplicity."

She invited him on that first day to pray the Holy Rosary outdoors every Friday at the foot of the olive tree that is now considered by many as sacred.

It is interesting that Edson from Brazil often visits and has apparitions in Italy.

We report. You discern. (What do you think?)

During the first apparition, the Virgin reassured Mario (apparently also a stigmatic) and asked him not to be afraid. "My son," she is said to have said, "the world moves away day after day from the ways of the Lord, to follow the footsteps of the Evil One. Do penance and pray for the conversion of sinners, to repair the serious blasphemies, for peace in the world is so much obscured. Pray and do pray a lot, especially the Rosary, my beloved."

During the first ten months the apparitions took place every Friday, reminding observers of the Ten Commandments. She calls herself Our Lady of Reconciliation. "After the first period of the apparitions the Mother of God appeared publicly only on the fifth of each month, with a suspension of the apparitions on Friday and leaving a public message monthly. The message from Friday, June 11, 2010: 'My children, this will be the month that I will not come every Friday, but only fifth of each month. You'll wonder why the fifth. Well, my children, five reminds you of my first appearance in S. Teresa, My Blessed and Holy Contrada, five reminds you of the five Wounds of Christ Jesus, five you remember as the first five Saturdays of the month, and the mysteries that make up the five decades of my Rosary.

"My children, 'five' is a special day of prayer and reparation. I wish this for the fifth of each month and that every fifth of the month will offer  a path of penance and reparation, a procession. "

Or so goes one translation.

We have heard all this before. It is always interesting.

"And so it is that Mario starts immediately at the service of the Mother of God, praying and making people pray, saying along the way that events will increase dramatically...

The local bishop, from what we can tell (with an initial translation), has made no final declaration but has expressed pointed concern and caution, particularly about the tone of some messages, establishment of a shrine without ecclesiastical sanction, and the propagation of prayers without an imprimatur.

[Donations: we need and appreciate it!]

[Comments from the diocese (rough translation): "Guidelines on the alleged apparitions to young Brindisi Mario D'Ignazio: in reference to the phenomenon of the alleged apparitions of the Virgin Mary to the young Brindisi Mario D'Ignazio, in recent days Archbishop Rocco Talucci handed over to the priests of the diocese guidelines. In the paper, in analyzing the phenomenon, he states that it 'is still open and the young Mario assumes all the responsibility'; Bishop Talucci has stated that there is 'nothing to say about the quality of the messages that our heavenly Mother would address to his sons,' but these, 'while stimulating the conversion for the affirmation of the Kingdom of God on earth, sometimes become inconsistent in the forms in which they occur.' Confirming the invitation to cultivate caution in the interpretation of the facts, with silent reflection and ecclesial in welcoming messages, [one should] hold humility in the formulation of operational decisions; the Archbishop highlights some notes of conduct and, in particular: 'The phenomenon of appearances seems to belong only to one seer and not to the Church, to whom is entrusted the deposit of faith. If the young recipient of "revelations," under the pretext of obeying the Blessed Virgin and God, felt the need to relate to the Church and the Archbishop, he is free to do so, but this is not how the Church functions...  If you want to use the media to publicize the various phenomena, which take place only on his word, and accept invitations to travel to different places to talk about the phenomenon, he must take responsibility, but it is not is according to the custom of the Church. In the message entrusted to the priest, Monsignor Talucci says further: 'It is arbitrary, so the Church must ... consider their campaign... formulating prayers without the imprimatur... distributing devotional signs like pilgrims to a shrine.' And again: 'They do not appear authentic certain messages aimed at individuals with a commitment to follow special forms of an association. It is delicate to speak publicly about the delivery of a message to the bishop. It seems strange that the spread of a message, very strong, against the priests, before being considered secret, was made ​​public without first presenting it to the Archbishop. Perplexity is created by harsh language, never used by the Blessed Mother and not at all merciful unto the priests of whom she is the Mother. Surprising is the irascibility of the family of the young towards those who demonstrate they do not believe the alleged phenomenon'... In the document, Bishop Talucci speaks directly to the priests recommending 'guiding the faithful to the normal life of faith and prayer, to understand the message of Mary in the Gospel and in the Church, expressing her maternal love, calls to conversion and holiness, educating the certainty of faith without relying on novelty.' It is recommended for the faithful to 'pray to the Lord to let us know the basic truth underlying these events, [expressing concern over] sometimes strange and contradictory [directives concerning the unofficial shrine], which do not belong to the normal practice of the faith and can deceive the weak and needy to understand the prudence of the Church, and not to increase the reaction possibly linked to personal demands."] 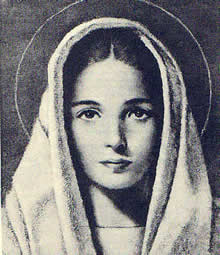